Breathtaking New Photos Show Jupiter's Hypnotic Swirling Storms, And How Is This Real?

Ever since space probe Juno gave us our first incredible views of the poles of Jupiter, the regions have fascinated and mesmerized us.

In one of the latest pictures Juno has sent back of the north pole, you can see why: a medley of storm vortices, connected and interconnected, appearing serene from a distance, but raging with an intensity we can only imagine here on Earth.

The image was obtained during Juno's 43rd close flyby of our Solar System's giant planet on 5 July, when the spacecraft skimmed a relatively close 25,100 kilometers (15,600 miles) above the polar cloud tops. Due to its axial orientation, Jupiter's poles aren't visible to us most of the time, so planetary scientists rely on Juno data to conduct studies of the atmospheric dynamics at play in these mysterious and tempestuous regions.

The image above looks relatively serene; zoom in to the cloud tops of Jupiter, however, and you begin to get a sense of the mind-boggling scale and ferocity of the planet's weather, as seen in this prior image processed by NASA engineer Kevin Gill, embedded below. A closeup of Jupiter. (Kevin Gill/Flickr/CC BY 2.0)

"These powerful storms can be over 30 miles (50 kilometers) in height and hundreds of miles across," a JPL NASA spokesperson wrote on the JPL website.

"Figuring out how they form is key to understanding Jupiter's atmosphere, as well as the fluid dynamics and cloud chemistry that create the planet's other atmospheric features. Scientists are particularly interested in the vortices' varying shapes, sizes, and colors."

Each of Jupiter's poles has its own idiosyncratic arrangement of storms. The south pole has – or rather, had – six cyclones, each comparable to the size of the continental United States, one in the center and five storms arrayed around it in an almost-perfect pentagon, all spinning clockwise.

Between Juno flybys, scientists could observe the appearance of a seventh storm, so the pentagon became a hexagon. (This differs from Saturn's northern polar hexagon, which is one hexagonally shaped storm.) 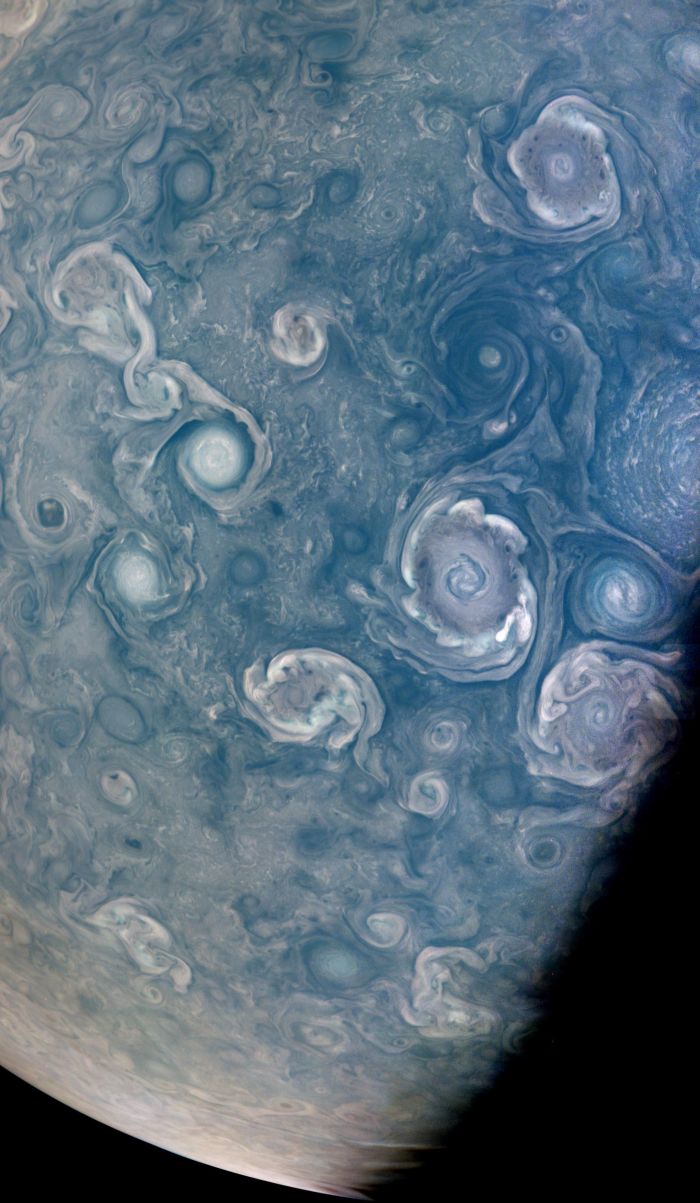 The north pole is even stranger: there, scientists identified nine storms, eight arrayed around one in the center, all spinning counterclockwise. And, at the high latitude regions around both these central polar concatenations of storms, other vortices rage.

Using Juno data, scientists have identified a mechanism whereby these storms stay separate instead of merging into one mega-storm, as we see at Saturn's poles. Tracking changes between Juno flybys is one of the most important tools planetary scientists have for understanding the wild weather at Jupiter, particularly its poles.

Citizen scientists can join in the fun, too. The above image was processed from Juno raw data by a citizen scientist. If you want to try your hand at that, there's a pretty detailed how-to guide here in BBC's Sky at Night Magazine. You can find Juno's raw images here.

And citizen scientists can also help identify and classify cyclone storms on Jupiter at Zooniverse's Jovian Vortex Hunter. This is a tool that will directly aid planetary scientists in better understanding this wild world.