Researchers have discovered that sun bears can precisely copy each other's facial expressions in social situations. It's a bigger deal than you might think, especially for scientists.

When humans are in social situations, we often adjust our facial expressions in response to someone else. It's called facial mimicry, and past a point of sufficient complexity it's thought to be a trait reserved to people and some primates.

"Mimicking the facial expressions of others in exact ways is one of the pillars of human communication," explains one of the researchers, Marina Davila-Ross, a comparative psychologist from the University of Portsmouth.

"Other primates and dogs are known to mimic each other, but only great apes and humans were previously known to show such complexity in their facial mimicry."

These other examples – dogs and primates - are interesting, but not groundbreaking, since they're both highly social species. Primates are closely related to us, and dogs have been domesticated for thousands of years. Sun bears (Helarctos malayanus) are none of those things, so what is going on?

Well, there are a few things we should mention first.

Sun bears are the smallest of the world's bear species, and live in the tropical forests of Southeast Asia, eating whatever is available.

It's well known that wild sun bears rarely interact with each other (apart from mating), while captive bears act much more socially, including engaging in play fighting.

The research looked at 22 sun bears from the Bornean Sun Bear Conservation Centre in Malaysia. Recordings were taken of the bears engaging in play fighting, and 372 social bouts were identified over a two year period.

After analysing recordings of the bears' faces, researchers found two distinct facial expressions in the playing animals: "With Upper Incisors" and "No Upper Incisors". 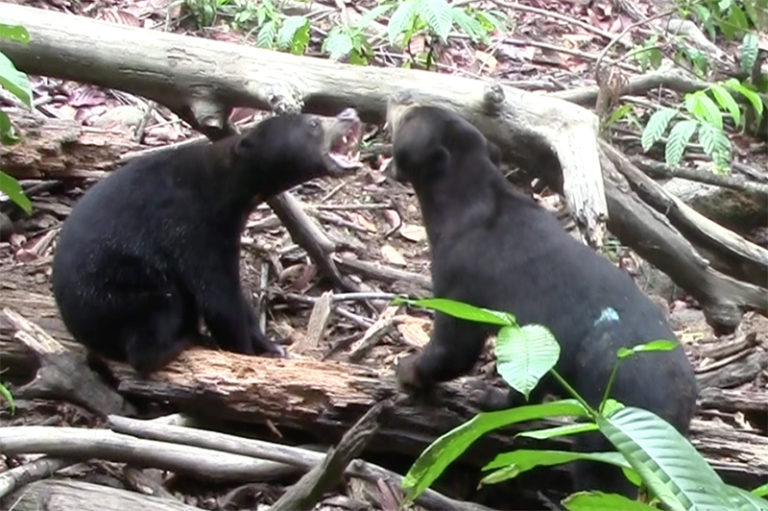 "With Upper Incisors occurred when the upper lip and nose were raised, which resulted in the wrinkling of the muzzle bridge and the revealing of the upper incisors," the team writes in their paper.

"No Upper Incisors occurred when the bear did not raise the upper lip and nose to such an extent, displaying therefore no wrinkling of the muzzle bridge and no upper incisors."

The team found that the bears were more likely to show their upper incisors during gentle play rather than rougher tumbles. Importantly, they would show these expressions when they saw their partner was looking at them, and when one of the bears would bare their teeth, the other would respond with the same expression nearly straight after.

And this exact expression response is what is getting scientists excited. Since sun bears are a pretty unlikely candidate for precise facial mimicry, the discovery might mean that they are not the only non-social animals to have such an ability.

"What's most surprising is the sun bear is not a social animal. In the wild, it's a relatively solitary animal, so this suggests the ability to communicate via complex facial expressions could be a pervasive trait in mammals, allowing them to navigate their societies," says Davila-Ross.

That is something the researchers still have to investigate, but it does give this unlikely bear their day in the spotlight.

"Sun bears are an elusive species in the wild and so very little is known about them. We know they live in tropical rainforests, eat almost everything, and that outside of the mating season adults have little to do with one another," says another member of the team, Derry Taylor, also from the University of Portsmouth.

"That's what makes these results so fascinating - they are a non-social species who when face to face can communicate subtly and precisely."