Sure, We'd Live in This Futuristic Underwater Sphere-City

Japanese construction company, Shimizu Corp, has just released details of a new underwater city they say would house 5,000 people, run on energy brought up from the seabed, and would take just five years to build.

Named Ocean Spiral, the city is designed to give people an emergency option as climate change is forcing global sea levels to rise and threaten the world's 52 small island nations. Even Japan is at risk, as rising global temperatures are set to bring on more frequent and potentially devastating earthquakes and tsunamis.

Working with researchers at Tokyo University and Japanese energy companies, Shimizu Corp hopes to draw funding from private investors and the Japanese government. They say the technology to start building Ocean Spiral will be ready in 15 years, and it won't be cheap - they're predicting the whole thing will cost $25 billion to complete.

According to plans released by the construction firm, this futuristic Atlantis would be divided into three sections. At the very top would be a sphere, almost all of which would be submerged just below the surface of the ocean. This sphere will contain houses, businesses and hotels. Then there's a pod, connected to a 15-kilometre-long spiral that winds all the way down into the seabed about 4 kilometres deep. Here the settlement's 'eco-friendly earth factory' will be located, as Justin McCurry explains at The Guardian:

"The factory will use micro-organisms to turn carbon dioxide into methane, while power generators located along the ocean spiral will use differences in seawater temperatures to create additional energy - a process known as ocean thermal energy conversion. Desalinated water produced using hydraulic pressure will be pumped into the residential pod."

"This is a real goal, not a pipe dream," Shimizu Corp spokesman Hideo Imamura told McCurry. "The Astro Boy cartoon character had a mobile phone long before they were actually invented – in the same way, the technology and know-how we need for this project will become available."

Of course, a project this outlandish is always going to have strong critics. Christian Dimmer, an expert in urban engineering at Toyko University, told The Guardian that projects like these have been proposed since the 1980s, but they bring with them an Elysium-esque 'elites-only' quality.

"It's good that many creative minds are picking their brains as to how to deal with climate change, rising sea levels and the creation of resilient societies," he said, "but I hope we don't forget to think about more open and democratic urban futures in which citizens can take an active role in their creation, rather than being mere passengers in a corporation's sealed vision of utopia."

Shimizu Corp have made quite a name for themselves in the 'wacky architecture' business. They've also previously proposed floating botanical cities, a space elevator, and a lunar base. 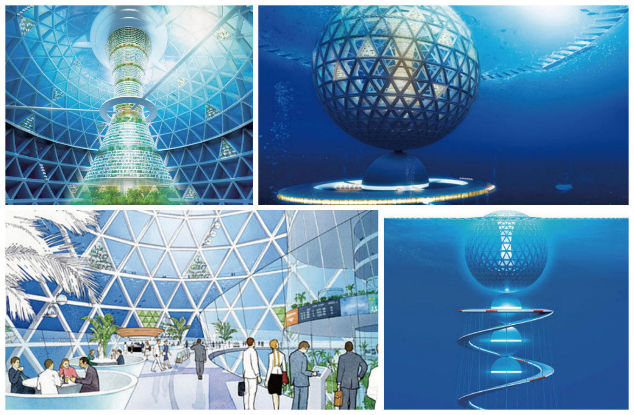