Last year, a genetic analysis of bone fragments representing our earliest known presence in Europe raised a few questions over the steps modern humans took to conquer every corner of the modern world.

Whoever the remains belonged to, their family background was more entwined with the East Asian populations of their day than with today's Europeans, hinting at a far more convoluted migration for our species than previously thought.

Now, researchers from the Universities of Padova and Bologna in Italy have proposed what they think might be the simplest explanation for the unexpected kink in the family tree, based on what we can piece together from genetic relationships and subtle shifts in ancient technology around the world.

If we retrace our footsteps from modern times through the Stone Age and beyond, we'll inevitably find a moment when a bunch of Homo sapiens took a pivotal step out of Africa onto what we now think of as Eurasian soil.

Earlier, more distant cousins had ventured out numerous times already, settling for a time before dying out. This time, it would all be different. This migration of modern humans stuck, eventually seeding a cultural revolution that would forever change our planet in just a few short millennia.

While the outcome of this monumental journey is now obvious, the paths taken and countless lost branches can only be pieced together from scant surviving artifacts and a legacy of genetic mingling.

The scattering of human bones and stone implements sifted from the sediment of Bacho Kiro Cave in central Bulgaria is just the kind of evidence archaeologists dream of. Uncovered in 2015, they have since been dated to around 45,000 years, officially making them the oldest Upper Paleolithic hominin bones ever found in Europe.

By taking archaeological records into account, we can tell they had descended from a larger community on a 15,000-year-long hiatus in their travels east. If we knew little else about them, we might conclude this people represent some kind of stepping stone between a future in Asia and a past set in Europe – a central hub on Africa's doorstep from which we expanded and settled ever further abroad.

The genetic evidence preserved in three of those bodies, however, doesn't match up quite so neatly with this simple scenario.

Last year, research led by the Max Planck Institute for Evolutionary Anthropology in Germany concluded the individuals were "more closely related to present-day and ancient populations in East Asia and the Americas than to later west Eurasian populations."

Finding closer familial ties with modern and ancient Asian populations than with modern European people introduces some challenging questions regarding the way this ancient hub of humanity might have branched into the east and west.

What's more, a generous dose of Neanderthal blood had recently been introduced into their family tree, further muddying the waters on how our ancestors might have moved and interacted.

According to the authors of this newest study, one possibility considers the migration of humanity a stutter rather than a surge.

"Then, around 45 thousand years ago, a new expansion emanated from the hub and colonized a wide area spanning from Europe to East Asia and Oceania and is associated with a mode of producing stone tools known as Initial Upper Paleolithic," says University of Padua molecular anthropologist, Leonardo Vallini. 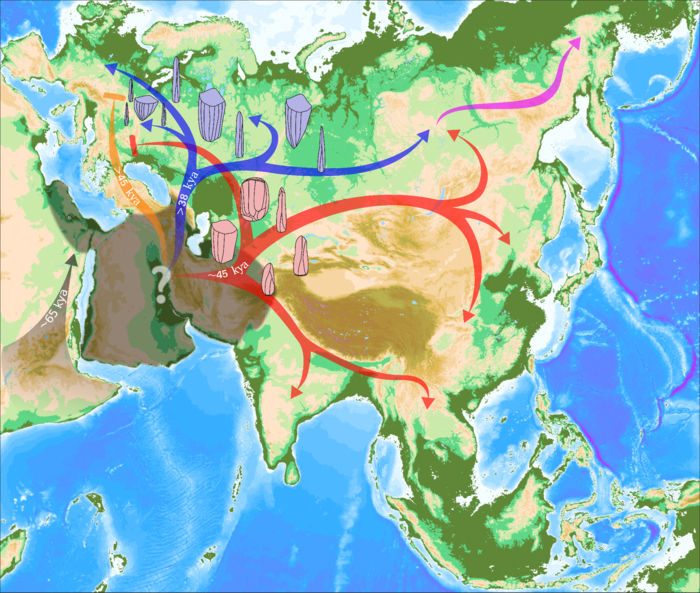 Above: An unknown hub in the west, from which humans expanded in waves of migration.

Those who branched into Asia thrived, traces of their bloodlines persisting to this day. But something happened in the west, something which saw a temporary end to the human experiment in Europe.

A second study conducted last year on female remains found in the Czechia provides a clue. While carbon dating is yet to confirm an age for her death, changes in her genes hinted at a date even further back than 45,000 years.

More importantly, the Paleolithic woman's ancestry wasn't closely related to either modern Europeans or Asians. Whatever happened to her and her kin, their story wasn't an enduring one.

"It is curious to note that, around the same time, also the last Neanderthals went extinct," says Giulia Marciani, an archaeologist from the University of Bologna.

It would have taken a fresh wave of human emigration from this central hub some 7,000 years later to repopulate the west and seed lineages that would go on to produce the rich array of cultures we see today.

Just where this temporary hub of humanity might be found and what prompted its populations to set off again and again is a matter for future archaeologists to figure out.

If we've learned nothing else, it's clear we shouldn't make too many assumptions when it comes to the story of how modern humanity made its way around the world.

This research was published in Genome Biology and Evolution.