Targeting immune cells in the brain called microglia has shown some promise towards developing a potential avenue for Alzheimer's treatment, according to new research using mouse models.

The primary job of microglia is to protect the brain, but they can carry a particular gene mutation that has previously been linked to an increased risk of Alzheimer's. In this study, researchers were able to establish the molecular fingerprint of that mutation.

By blocking off the effects of the mutation in tests on mice, the team was able to reverse some of the inflammatory effects and synaptic toxicity (neuron damage) that's usually seen as Alzheimer's disease progresses in the brain.

"Microglia are guardians of the brain under healthy conditions, but can turn detrimental in disease conditions," says physiologist Li Gan, from Cornell University in New York.

"Our goal is to identify how they become toxic and contribute to Alzheimer's disease pathogenesis and whether we can identify immune modulators to reverse the toxicity without diminishing their normal protective function."

The TREM2 gene is the receptor that the team concentrated on, and it signals through an enzyme called AKT to modulate inflammation and metabolism. For their mouse models, the researchers used a genetic strain combining the TREM2 mutation with another one known to produce tau protein clumps – which are also linked to Alzheimer's.

Mice with the strain exhibited memory problems, while the microglia in their brains showed high levels of inflammatory molecules and an overactive AKT signaling pathway. The effects matched those seen in the brains of human patients with Alzheimer's.

When a drug called MK-2206 was used to inhibit AKT, the inflammation and damage was reversed. Even better, MK-2206 is already being assessed by safety agencies as a potential anti- cancer drug, which means it shouldn't take as long as usual to be developed further if it is found to show promise in Alzheimer's research, too.

"Our findings support further study of this compound as a potential therapy for Alzheimer's disease," says Gan. 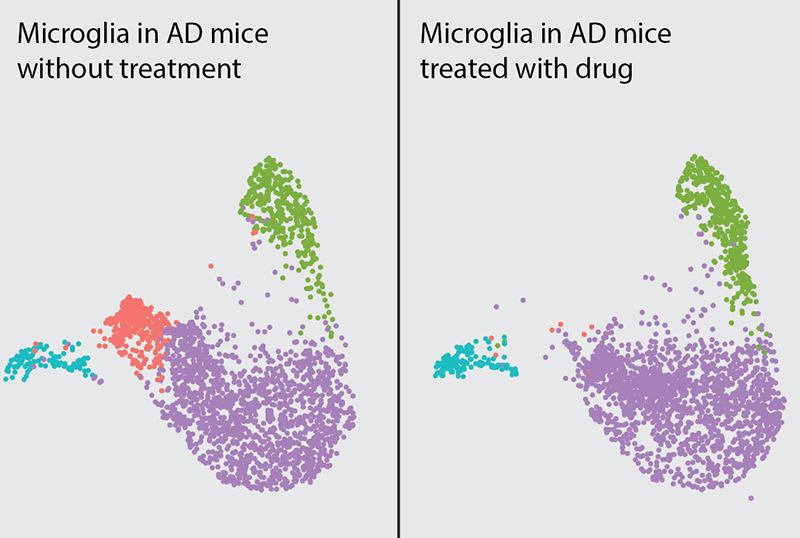 Above: Each dot in the image represents one microglial cell, with different colors representing different cell states. Treatment with the experimental drug depleted a cluster of disease-associated microglia (seen in pink on the left side).

There are numerous genetic variations that are associated with an increased risk of Alzheimer's disease, and many of them are highly expressed in microglia, suggesting that alterations to these cells are somehow linked to the progress of the condition.

What makes research into the disease especially difficult is that we're still not sure exactly what causes it or how it starts – but scientists are able to study the effects of Alzheimer's as it progresses, and can work backwards from there to look for clues.

With around 46 million people worldwide thought to be affected by Alzheimer's, any progress in fighting the condition is encouraging news – and will hopefully one day lead to better treatments for the neurodegenerative disease.

"We identified a small molecule compound that has been tested in patients with cancer, readily enters the brain, potently modulates the brain's immune responses, and protects against synaptic loss in animal models of Alzheimer's disease," says Gan. Let's hope this won't be the last we hear of it.