The Antarctic ozone hole hit its smallest annual peak on record since tracking began in 1982, the National Oceanic and Atmospheric Administration (NOAA) and NASA announced Monday. Although we're making progress in cutting down on the use of ozone-depleting chemicals, the milestone doesn't mean we've solved the problem, the agencies cautioned.

Instead, scientists attribute the relatively tiny ozone hole to unusually mild temperatures in that layer of the atmosphere.

According to NASA and the NOAA, the annual ozone hole - which consists of an area of heavily depleted ozone high in the stratosphere above Antarctica, between 7 and 25 miles (11 and 40 kilometres) above the surface - reached its peak extent of 6.3 million square miles on September 8 and then shrank to less than 3.9 million square miles during the rest of September and October.

"During years with normal weather conditions, the ozone hole typically grows to a maximum of about 8 million square miles," the agencies said in a news release.

This is the third time in 40 years that weather systems have caused warm stratospheric temperatures that put the brakes on ozone loss, the federal science agencies said. Similar weather patterns led to unusually small ozone holes in 1988 and 2002, they reported.

"It's a rare event that we're still trying to understand," Susan Strahan, an atmospheric scientist at the NASA's Goddard Space Flight Center in Maryland, said in a news release.

"If the warming hadn't happened, we'd likely be looking at a much more typical ozone hole." 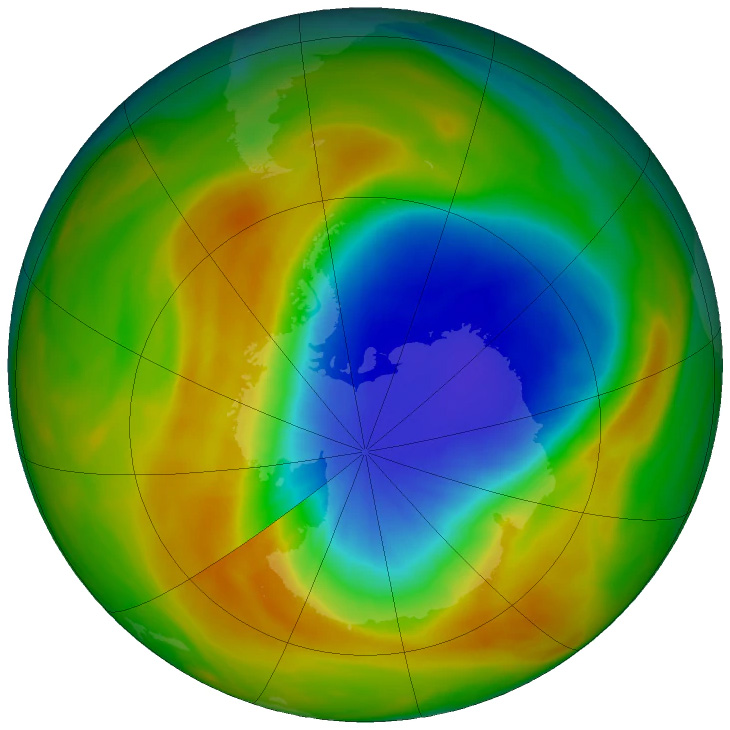 The stratospheric ozone layer helps deflect incoming ultraviolet radiation from the sun, shielding life on Earth from its harmful effects, such as skin cancer, cataracts and damage to plants.

However, chemicals used for refrigeration purposes, such as chlorofluorocarbons (CFCs) and hydrofluorocarbons (HFCs), break down stratospheric ozone molecules, thereby exposing the planet's surface to greater amounts of UV radiation.

These chemicals have an atmospheric lifetime of several decades and can destroy extraordinary amounts of ozone over that time. The ozone layer has been slowly but steadily recovering since the Montreal Protocol took effect, but it still has a long way to go.

Each year, an ozone hole forms during the Southern Hemisphere's late winter as the sun's rays initiate chemical reactions between the ozone molecules and man-made chemically active forms of chlorine and bromine.

These chemical reactions are maximized on the surface of high-flying clouds, but milder-than-average conditions in the stratosphere above Antarctica this year inhibited cloud formation and persistence, according to a NASA statement. This helped prevent the loss of a considerable amount of ozone.

For example, unlike what typically happens, there was no area above Antarctica this year that was completely lacking in ozone, according to measurements from NOAA using weather balloons.

The weather systems that minimized ozone depletion in September, known as "sudden stratospheric warming" events, were unusually strong this year. About 12 miles (19 kilometres) above Earth's surface, temperatures during September were 29 degrees higher than average, NASA reported, "which was the warmest in the 40-year historical record for September by a wide margin."

As can occur with stratospheric warming events in the Northern Hemisphere, this weather event helped to weaken the Antarctic polar vortex, a ribbon of high-speed air encircling the South Pole that typically concentrates the coldest air near or over the pole itself.

Instead, the Antarctic polar vortex was knocked off balance and slowed significantly, from an average wind speed of 161 mph (260 km/h) to just 67 mph (107 km/h).

The slowing vortex allowed air to sink in the lower stratosphere, where it warmed and inhibited cloud formation. In addition, the reconfigured weather map helped to import ozone-rich air from other parts of the Southern Hemisphere, rather than sealing off the polar region entirely. This also helped boost ozone levels there.

Interestingly, climate change isn't expected to cause more frequent sudden stratospheric warming events over the South Pole, and instead it could strengthen, not weaken, the polar vortex overall.

In contrast with global warming, the discovery of the ozone hole by scientists at the British Antarctic Survey in 1985 galvanized international action. This swiftly resulted in a binding international treaty that many experts consider the most successful environmental agreement to date.

In fact, policymakers are even using it to address HFCs, ozone-depleting chemicals that are also global-warming pollutants.

Since 2000, atmospheric levels of CFCs have been slowly declining, but they are still sufficiently abundant to cause annual ozone holes at the North and South poles.

Assuming that CFC use continues at recent rates and that no ozone-depleting chemical substitutes are found and widely used, scientists anticipate the ozone hole to shrink to its 1980 size by about 2070 as CFCs still in the upper atmosphere gradually decline.