There's a small and exclusive list of places where crop cultivation first got started in the ancient world – and it looks as though that list might have another entry, according to new research of curious 'islands' in the Amazon basin.

The savannah of the Llanos de Moxos in northern Bolivia is littered with thousands of patches of forest, rising a few feet above the surrounding wetlands. Many of these forest islands, as researchers call them, are thought to be the remnants of human habitation from the early and mid-Holocene.

Now, thanks to new analysis of the sediment found in some of these islands, researchers have unearthed signs that these spots were used to grow cassava (manioc) and squash a little over 10,000 years ago.

That's impressive, as this timing places them some 8,000 years earlier than scientists had previously found evidence for, indicating that the people who lived in this part of the world - the southwestern corner of the Amazon basin - got a head start on farming practices.

In fact, the findings suggest that southwestern Amazonia can now join China, the Middle East, Mesoamerica, and the Andes as one of the areas where organised plant growing first got going – in the words of the research team, "one of the most important cultural transitions in human history".

"Archaeologists, geographers, and biologists have argued for many years that southwestern Amazonia was a probable centre of early plant domestication because many important cultivars like manioc, squash, peanuts and some varieties of chili pepper and beans are genetically very close to wild plants living here," says earth scientist Umberto Lombardo from the University of Bern in Switzerland.

"However, until this recent study, scientists had neither searched for, nor excavated, old archaeological sites in this region that might document the pre-Columbian domestication of these globally important crops."

Around 10,000 years ago (or more), many of the forest islands would have formed due to how human activity - dumping food waste, for example - changed the quality of the soil as the ice age receded.

"Anthropic forest islands are entirely artificial, and do not take advantage of pre-existing landscape features," the researchers note in the study. "These accumulative middens constituted fertility hotspots amid poor savannah soils."

There are thousands of forest islands in the region, and the researchers used remote sensing data to map 6,643 of them. The team also surveyed 82 of these islands, extracting sediment samples. Further analysis revealed tiny bits of phytolith – structures made of silica that are known to form inside the cells of plants, and get left behind after they decay.

These phytoliths can also tell scientists which plant they came from, which links the sites to organised farming practices. Using radiocarbon dating techniques, the team was able to work out when these crops were being grown.

As well as manioc (~10,350 years ago) and squash (~10,250 years ago), the soil from several of the islands also revealed signs of maize (~6,850 years ago). Fish and meat would have been supplemented by these carbohydrate-rich crops as part of the diet at the time, the scientists think. 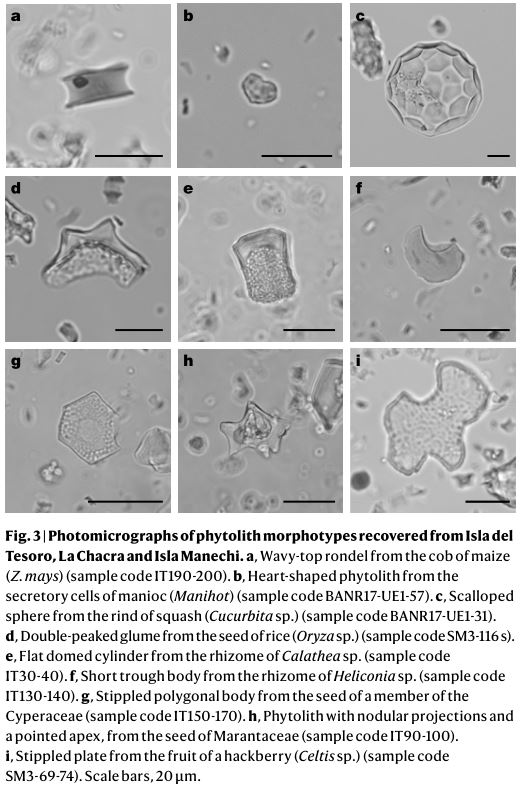 "We already knew from genetic studies that manioc was domesticated some time between 8,000 to 10,000 years ago, so it is the squash evidence that is most surprising," microbotanist Jennifer Watling from the University of São Paulo in Brazil, who wasn't involved in the study, told George Dvorsky at Gizmodo.

"The fact that people were cultivating an already-domesticated squash species by 10,000 years ago implies an even earlier period of pre-domestication cultivation, and it will be extremely interesting to know where this took place."

As the team analysed just a fraction of the forest islands that still exist on the landscape, there's plenty of scope for more research and exploration here. This is a place and a period that archaeologists still don't know too much about - but it could well be one of the birthplaces of plant domestication.

"Genetic and archaeological evidence suggests there were at least four areas of the world where humans domesticated plants around 11,000 years ago, two in the Old World and two in the New World," says archaeologist Jose Iriarte, from the University of Exeter in the UK. "This research helps us to prove southwestern Amazonia is likely the fifth."

"The evidence we have found shows the earliest inhabitants of the area were not just tropical hunter-gatherers, but colonisers who cultivated plants. This opens the door to suggest that they already ate a mixed diet when they arrived in the region."