Bears. Is it bears? That's what many of you may be wondering right now. Or maybe sharks. Wolves. Venomous snakes that won't let go of your ankle.

When we think of deadly animals, it's easy to imagine that fearsome creatures in the wild pose the greatest danger to people, but a new analysis of human fatalities due to animals in the US shows the usual suspects aren't the dangers to society we dread them to be.

"Importantly, most deaths are not actually due to wild animals like mountain lions, wolves, bears, sharks, etc." says surgeon Jared A. Forrester from Stanford University, who led an investigation into fatalities due to animals in the period 2008–2015, based on data collected by the Centers for Disease Control and Prevention (CDC).

"So, while it is important that people recreating in the wilderness know what to do when they encounter a potentially dangerous animal, the actual risk of death is quite low."

But if wild animals with sharp teeth and claws aren't the biggest risk to people, what is? 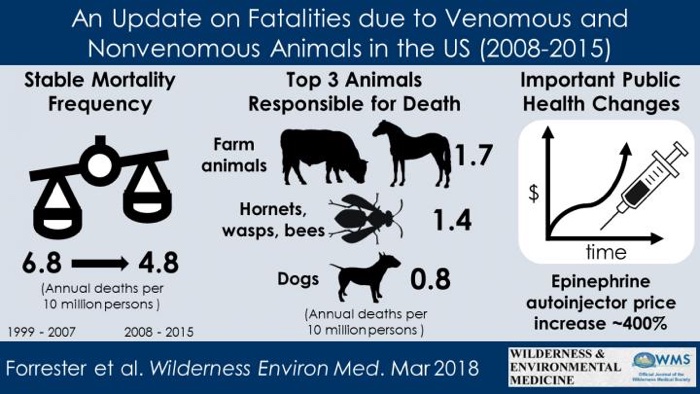 Well, if you exclude stinging winged insects for a second (more on them in a bit), the deadliest animals to humans in the US are those that we have living within and around our homes – and our homesteads.

Farm animals – mainly horses and cattle – are actually the biggest killer, with their category ('other' nonvenomous mammals) responsible for 576 deaths (36 percent of all fatalities) in the period, claiming an average of 72 fatalities per year.

Dogs were responsible for a little less than half that, coming in third overall (second in terms of non-venomous animals) with 272 deaths total.

For such a loved animal that makes up a valuable part of so many families, dogs' inclusion on the list ought to be a wake-up call for everybody, particularly for parents: children under four years of age are killed at a rate almost two times higher than the next most vulnerable group (people over 65), and four times higher than other age groups.

"Children under four are at substantial risk," Forrester told The New York Times.

"And it's usually family dogs or dogs known to the children who are doing the killing. It's up to public health professionals and parents to prevent these interactions."

While dogs are deadly, they don't claim as many lives overall as winged venomous insects of the order Hymenoptera – comprising hornets, wasps, and bees – the second biggest killer in the study.

Stings from these flying insects killed 478 people overall during the study period (60 per year on average).

That might be shocking, but what's even more shocking is this: since the last time the researchers analysed this kind of data – covering the period 1999–2007 – the cost of some epinephrine autoinjectors has skyrocketed by more than 400 percent.

That's a huge problem, since these kinds of treatments – like the name brand EpiPen – are what saves the lives of people from death caused by anaphylaxis brought on by venomous stings.

"With an estimated 220,000 annual visits to the emergency department and nearly 60 deaths per year due to stings from hornets, wasps, and bees, effective and affordable treatment for anaphylaxis from Hymenoptera is critical," the researchers write in their paper.

"Public health practitioners, policymakers, and the public should encourage industry to provide proven public health interventions, like the EpiPen, at a socially responsible price point that serves the best interest of the US population."

Another thing the team is calling for is greater awareness of the risks animals at large can cause to people in the US: while deaths due to animals haven't gotten worse since the researchers' last study, they also haven't gotten better.

That's not a good thing, since the team says most of these fatalities caused by animals should ultimately be preventable.

These are important things for people to think about – much as we should probably recalibrate our fears about how dangerous wild animals really are.

In the same period in which dogs killed 272 people, 49 people lost their lives to spiders, and 48 to snake (or lizard) bites. Marine animals (including sharks) killed 13, and scorpions killed just two.

For a global perspective, see here.

The findings are reported in Wilderness & Environmental Medicine.