When people first arrived in what is now Queensland, they would have found the land inhabited by massive animals including goannas 6 metres (20 feet) long and kangaroos twice as tall as a human.

We have studied fossil bones of these animals for the past decade. Our findings, published today in Nature Communications, shed new light on the mystery of what drove these ancient megafauna to extinction.

The first bones were found by the Barada Barna people during cultural heritage surveys on their traditional lands about 100 kilometres (60 miles) west of Mackay, at South Walker Creek Mine.

Our study shares the first reliable glimpse of the giants that roamed the Australian tropics between 40,000 and 60,000 years ago.

These megafauna were the largest land animals to live in Australia since the time of the dinosaurs. Understanding the ecological role they played and the environmental impact of their loss remains their most valuable untold story.

While megafauna lived at South Walker Creek, people had arrived on the continent and were spreading across it. Our study adds new evidence to the ongoing megafauna extinction debate, but importantly underscores how much is left to learn from the fossil record.

We excavated fossils from four sites and made detailed studies of the sites themselves to find the age of the fossils and understand what the environment was like in the past.

Our findings give us an idea of what megafaunal life was like in the tropical Australian savanna over a period of about 20,000 years, from around 60,000 to 40,000 years ago. During this time, the northern megafauna were different to those from the south.

We have found at least 13 extinct species so far at South Walker Creek, with mega-reptiles as apex predators, and mega-mammals their prey. Many of the species discovered are likely new species or northern variations of their southern counterparts.

Some, like the extinct crocodiles, were thought to have gone extinct long before people were on the scene. However, we now know they survived in at least one place 60,000-40,000 years ago.

Imagine first sighting a 6 metre goanna and its Komodo Dragon-sized relative, or bumping into a land-dwelling crocodile and its plate-mail armoured aquatic cousin. The mammals were equally bizarre, including a giant bucktoothed wombat, a strange "bear-sloth" marsupial, and enormous kangaroos and wallabies.

A yet-to-be named giant kangaroo is the largest ever found. With an estimated mass of 274 kg (600 pounds), it beats the previous contender, the goliath short-faced kangaroo, Procoptodon goliah. 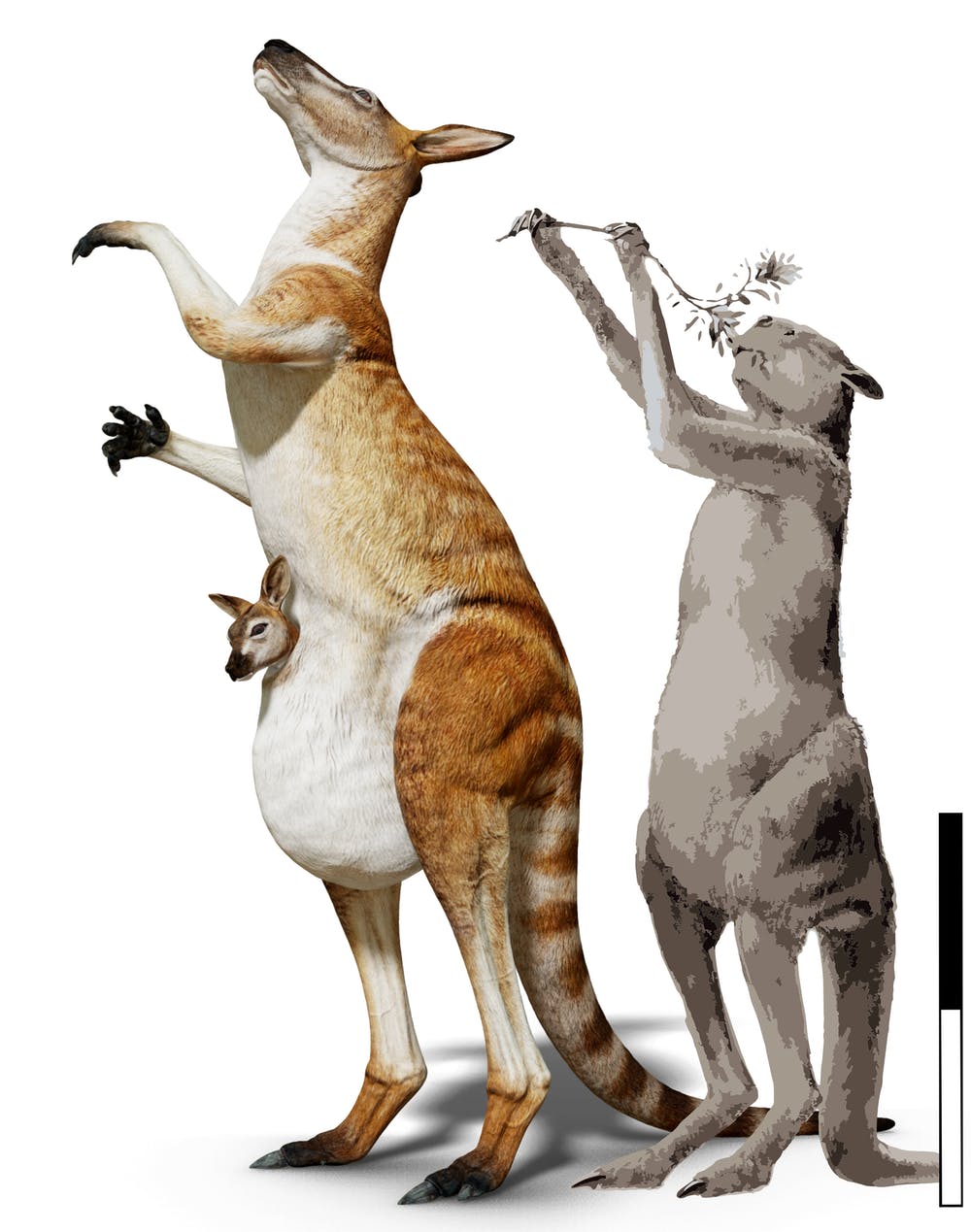 Above: The giant kangaroo of South Walker Creek may be the largest kangaroo ever found. Pictured here next to the previous titleholder, Procoptodon goliah. Scale bar equals a meter.

The biggest of all the mammals was the three-tonne marsupial Diprotodon, and the deadliest was the pouched predator Thylacoleo. Living alongside these giants were other megafauna species that still survive today: the emu, the red kangaroo and the saltwater crocodile.

Why did these megafauna become extinct? It has been argued that the extinctions were due to over-hunting by humans, and occurred shortly after people arrived in Australia.

However, this theory is not supported by our finding that a diverse collection of these ancient giants still survived 40,000 years ago, after humans had spread around the continent.

The extinctions of these tropical megafauna occurred sometime after our youngest fossil site formed, around 40,000 years ago. The timeframe of their disappearance coincided with sustained regional changes in available water and vegetation, as well as increased fire frequency.

This combination of factors may have proven fatal to the giant land and aquatic species.

The megafauna extinction debate will no doubt continue for years to come. New discoveries will plug up the key gaps in the record. With the gaps in the north of the continent the greatest yet to fill.

With an overlap between people and megafauna of some 15,000–20,000 years, new questions arise about co-habitation. How did people live with these giants during a period of such drastic environmental change?

How much more change can Australia bear?

Major environmental change and extinctions are not an unusual part of our geological past, but this time it's personal; it involves us. Throughout the Pleistocene (the time that ended with the most recent ice age), Australia has undergone major climatic and environmental change.

Within the same catchment of these new megafauna sites, one study shows how major climatic upheaval beginning around 280,000 years ago caused the disappearance of a diverse rainforest fauna.

This set in motion a sequence of changes to the ecosystem that culminated in the loss of the megafauna at South Walker Creek around 40,000 years ago.

It's still unclear what impact these long-term environmental changes and the loss of the megafauna had on the species that survived.

This long-term trend of extinctions has now been given a kick along by the major changes to the environment created by humans which continue today. In the early 21st century in Australia we have seen increases in floods, droughts and bushfires, and we expect these increases to continue.

The fossil record provides us with a window into our past that can help us understand our present. As our study shows, dramatic environmental change takes a heavy toll on species survival especially for those at the top of the food chain. Will we heed the warnings from the past or suffer the consequences?