A Feathered Dinosaur Tail Has Been Found Preserved in Amber

A dinosaur tail with beautifully preserved feathers still attached to the bone has been found preserved in amber, and it's one of the coolest things we've ever seen.

"It's a once in a lifetime find," one of the researchers, Ryan McKellar from the Royal Saskatchewan Museum in Canada, told CNN. "The finest details are visible and in three dimensions."

Amazingly, the piece of amber was found at a market in Myanmar last year, where it was being sold as a chunk of amber containing plant material.

Lead researcher Lida Xing, from the China University of Geoscience in Beijing, immediately recognised that there were feathers inside, and teamed up with McKellar to learn more about the unique specimen.

Using detailed microscopy and a CT scanner to observe the structure of the feathers and the bones they were attached to, the team predicts that the tail belonged to a young coelurosaur, a family of bird-like carnivorous dinosaurs that lived around 99 million years ago during the Cretaceous era.

As far as researchers are aware, these are the first non-avian dinosaur feathers found preserved in amber.

"The new material preserves a tail consisting of eight vertebrae from a juvenile; these are surrounded by feathers that are preserved in 3D and with microscopic detail," said McKellar in a press release.

"We can be sure of the source because the vertebrae are not fused into a rod or pygostyle as in modern birds and their closest relatives. Instead, the tail is long and flexible, with keels of feathers running down each side."

In other words, the feathers definitely belong to a dinosaur, not a prehistoric bird.

The team has now nicknamed the young coelurosaur 'Eva', and at the time of her unfortunate death she would have been around the size of a sparrow - but fully grown would have been a little smaller than an ostrich.

The family she belongs to is closely related to iconic meat-eaters such as T. rex and Velociraptor - but as the new discovery shows, Eva was most likely more cute and fluffy.

Analysis of the feathers suggest that the tail had a chestnut-brown upper surface and a pale or white underside. 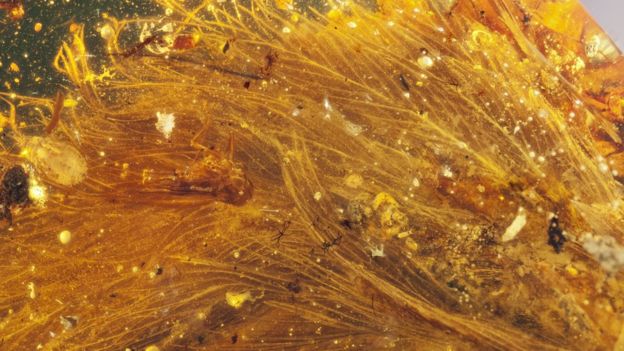 Interestingly, the feathers are missing a well-developed central shaft, also known as a 'rachis'. This could help answer one of the long-standing questions in feather evolution - did feathers start out stiff and spiky with a central shaft, or were they originally fluffy and floppy?

It's an important question, seeing as researchers think that, without that central shaft, flight wouldn't have been possible.

The new discovery leans on the side of the fluffy parts of the feather coming first, but we'll need to find a lot more preserved feathers from the era and examine them before we can say for sure.

The team also studied the chemistry of the specimen where it was exposed at the surface of the amber, and showed that the soft tissue layer around the bones had traces of ferrous iron - the remains of haemoglobin from Eva's blood that was also trapped in the sample.

The hope now is that the team will find more of these remains trapped in amber - and maybe even one day a partial or complete dinosaur - to help compliment all the incredible things we've learnt about dinosaurs from the fossil record.

"It's a spectacular little glimpse," McKellar told NPR. "It gives us, basically, a pathway that gets us to modern feathers."