Researchers say there's more plastic waste in the Great Pacific Garbage Patch than was previously estimated, meaning it's more urgent than ever that we do something about this massive trash flotilla.

"More debris was recorded than what is expected to be found in the heart of the accumulation zone," write members of Dutch foundation, the Ocean Cleanup, who surveyed the area in a modified C-130 Hercules plane, using LIDAR (laser) scanners and multispectral camera technology to size up the problem.

"Initial estimates of the experienced observer crew indicate that in a span of 2.5 hours, over a thousand items were counted."

If you've not heard of the Great Pacific Garbage Patch (also called the Pacific trash vortex), it's an area of the ocean where currents and winds cause an accumulation of waste debris - usually plastic.

While other 'patches' occur in various parts of the ocean, the Great Pacific Garbage Patch is thought to be one of the biggest, even though we're not entirely sure how big it is.

And don't be fooled by those photos on the internet of boats ploughing through bottles, crates, and tyres floating on top of the water - that's Manila Harbour - not the Great Pacific Garbage Patch.

In reality, most pieces of plastic in the actual garbage patch are roughly the size of your smallest fingernail, though some can be much bigger - up to half a metre long.

As Carey Morishige from the the NOAA's marine debris program explains, "patch" is something of a misnomer:

"While it's true that these areas have a higher concentration of plastic than other parts of the ocean, much of the debris found in these areas are small bits of plastic (microplastics) that are suspended throughout the water column."

"A comparison I like to use is that the debris is more like flecks of pepper floating throughout a bowl of soup, rather than a skim of fat that accumulates (or sits) on the surface." 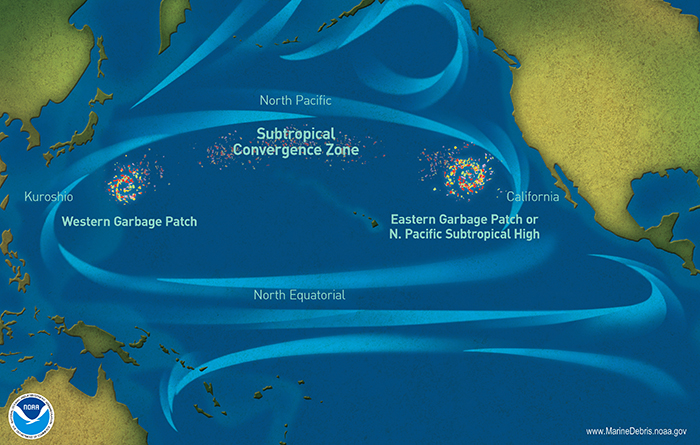 The Great Pacific garbage patch, labelled here as the Eastern Garbage Patch, is one of several such patches in our oceans. Credit: NOAA

That's not to diminish the scale of the problem, though. Sea life can get tangled up in even the smallest pieces of plastic, or mistake it for food, and scientists are working hard to determine just how the trash pool is knocking marine ecosystems off balance.

As Annalee Newitz reports at io9, it's difficult to assess the extent to which the plastic is killing off birds and fish, but it's definitely adding extra toxins to their diet, and possibly passing those on to humans further up the food chain. Whichever way you look at it, it's bad news for everybody.

What's also certain is that the problem is getting worse. Recent research showed that the number of plastic particles and their levels of concentration have risen sharply in the North Pacific over the past 40 years.

And a report released by the World Economic Forum earlier in the year found that, the way things are headed, there'll be more plastic than fish in our oceans by 2050.

Fortunately, the Ocean Cleanup foundation is committed to ridding our seas of this waste, with plans to catch and extract all of this plastic through a series of environmentally friendly screens that can trap plastic but allow marine life through. Once collected, the trash can be shipped to land, and recycled or sold.

To design its screening and collection system effectively, the Ocean Cleanup needs to know precisely what it's dealing with, which is why it's assessing the patch in a series of fly-overs.

"The Aerial Expedition - our final reconnaissance mission - brings us another step closer to the clean-up of the Great Pacific garbage patch," said founder and CEO, Boyan Slat.

"The initial findings of the expeditions again underline the urgency to tackle the growing accumulation of plastic in the world's oceans."