The jury's still out on whether liquid water yet flows on the Red Planet. In 2015, NASA blew our minds, saying it did. More recently, we've heard otherwise.

While the verdict remains unknown, a new study suggests we may need to rewrite what we think we know about the history of water on Mars – as the Red Planet may hold more of it than we ever suspected, just not in the places we've been looking.

One of the pieces of evidence we have for a hotter, wetter Mars billions of years ago comes in the form of ancient phyllosilicates, or clays, which are found in rock formations scattered across the surface of the planet.

Conventionally, many have speculated the existence of this clay supports the idea that in the Red Planet's distant past, there must have been substantial interactions between volcanic rocks and surface water, groundwater, or active hydrothermal systems.

But that's not what planetary geologist Kevin Cannon thinks. The University of Central Florida researcher says the clay may date from a very different kind of water birth: a primordial steam bath fuelled by an ocean of volcanic magma at the planet's inception. 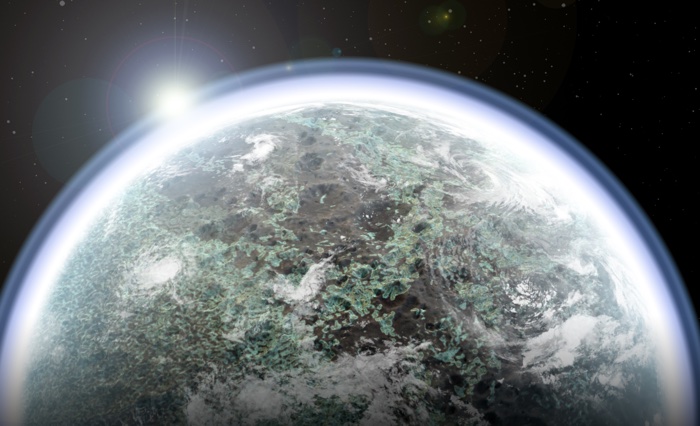 "The basic recipe for making clay is you take rock and you add heat and water," says Cannon. "This primordial atmosphere created by a magma ocean would have been the hottest and wettest Mars ever was."

In this hypothetical scenario, back when Mars formed during the very early Solar System, it, like other rocky planets, would likely have been covered by oceans of molten magma to make Mordor blush.

As the environment cooled, and the ocean solidified, Cannon and his team think water within the planet would have been shunted to the surface and propelled into the atmosphere, forming a thick, humid fog enveloping the planet.

This primordial sauna could have transformed the newly solidified surface of rock into vast stretches of clay, which over billions of years would have been displaced by volcanic activity and asteroid bombardment, leaving the scattered phyllosilicate outcrops we see on the Red Planet's surface today.

The scenario, inspired by previous research examining the nature of magma oceans in the early Solar System, remains speculative, the team acknowledges.

But the researchers' computer simulations lend further weight to the idea – as do experiments in which they gave rock with the consistency of a Mars-like basalt a hot, high-pressure steam bath for two weeks, which ended up significantly altering the properties of the samples.

If they're right about this primordial hothouse, the findings aren't just relevant to keen students of ancient Martian history, as it could mean the Red Planet's watery past wasn't as stable and sustained as we once imagined.

"Instead, warm and wet conditions may have been restricted to the earliest history of Mars 4.5 billion years ago, when it was cooling from magma ocean conditions to ambient temperatures," Cannon told ScienceAlert.

"There had to have been a window there when temperatures were right for life to emerge and thrive, but how long did that window last? After the planet cooled fully and the magnetic field disappeared, life likely had to retreat below ground if it had any chance of surviving."

To that extent, the scenario could mean that future human efforts searching for water – and potentially life – on Mars aren't best centred around exploration of the surface or near to it, but perhaps deep underground instead, where a goldmine of sequestered clay and other minerals may yet remain hidden.

"The primordial clay scenario predicts potentially much more water [than other hypotheses], but water that is locked up in minerals and buried many kilometres below the surface," Cannon told ScienceAlert.

"We estimate this sequestered water may be enough to cover the planet with a layer more than half a kilometre thick, at least an order of magnitude more than the water in the polar caps and in permafrost deposits."

It's a tantalising vision, but we won't be sure of just how accurate the team's scenario is until we know more about the properties of Martian clay.

The researchers hope NASA's upcoming Mars 2020 rover mission could help them out on that front, as the rover could land in a spot where primordial clays are present – in which case, we may well be tapping into the future of Mars exploration, not just the secrets of its past.

"[R]eturned samples of this material could unlock big questions about the earliest phases of Martian history," Cannon told ScienceAlert.

"These clays, and other water-bearing minerals can also be used as a source of water for future astronauts."