An engineer examines one of the sunshield's layers. (Nexvolve)
SPACE

Rigorous testing is at the heart of any successful space mission. The James Webb Space Telescope (JWST) will be a million miles away when it deploys its mission-critical sunshield, and if it doesn't function as planned, that's it. Game over.

The Webb is the most advanced space telescope ever built. It's an infrared telescope, and a highly sensitive one. But to achieve the extreme sensitivity that will allow it to study exoplanets and the distant, early Universe, it needs to be kept cool. Very cool. And that's the sunshield's job.

The sunshield is critical in the design of the telescope. The James Webb will be at Lagrange Point 2 (L2), in a halo orbit that keeps Earth, the Moon, and Sun behind it.

The Sun is the main source of heat for the telescope, and the Earth and the Moon are only secondary sources. The shield effectively blocks all of the energy coming from all three of those bodies and keeps the 'scope at its operating temperature, below -220 Celsius (-370 F; 50 K). There will be an extreme temperature difference between the sunshield side of the JWST and the 'scope side. NASA says that the sunshield can reach temperatures of 110 C (230 F; 383 K) hot enough to boil an egg, while the shaded telescope side will be cold enough to freeze oxygen.

Technicians and engineers just completed testing all five of the sunshield's layers, and putting the shield into the same position it'll be in at L2, 1.6 million kilometers (1 million miles) from Earth.

NASA said in a press release that those tests used the spacecraft's own systems to deploy the shield and that the testing was successful.

"This was the first time that the sunshield has been deployed and tensioned by the spacecraft electronics and with the telescope present above it. The deployment is visually stunning as a result, and it was challenging to accomplish," said James Cooper, NASA's Webb Telescope Sunshield Manager at NASA's Goddard Space Flight Center, Greenbelt, Maryland. The sunshield is five layers of a material called Kapton. Each of the layers is a specific thickness, and they are separated by a specific distance. The shield also has seams and other features that reinforce it against meteors.

Each of the layers is coated with aluminum, and the two layers closest to the Sun, Layers 1 and 2, have what's called a "doped silicon" coating to reflect the Sun's ultraviolet energy back into space.

"This test showed that the sunshield system survived spacecraft element environmental testing, and taught us about the interfaces and interactions between the telescope and sunshield parts of the observatory," Cooper added.

"Many thanks to all the engineers and technicians for their perseverance, focus and countless hours of effort to achieve this milestone."

James Webb's spacecraft bus is about the same size as the Hubble. But the JWST's mirror is double the size of the Hubble's.

In fact, the Webb's gold mirror is already a cultural icon, even though it hasn't launched. 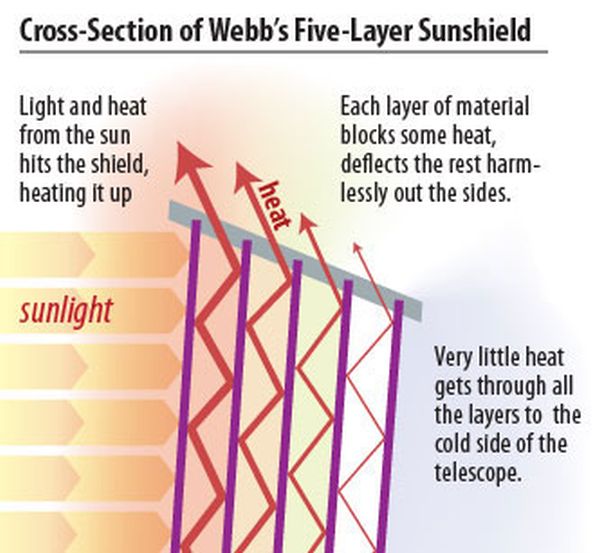 How the sunshield works. (STSci)

The mirror needs to be that large to meet its mission goals, which include observing the light from the first stars and galaxies in the universe, and studying exoplanets, among other things.

But the mirror, and the required sunshield, are too large to fit in a rocket. That's why both the mirror and the sunshield are folded up for launch and only deployed once the telescope is on its way to its destination, a complicated manoeuvre.

Not only that, but the testing is all being done in Earth's gravity, while actual deployment will take place in the absence of gravity.

And that's what all of the testing and re-testing is about. Unlike the Hubble, which in Low-Earth Orbit was accessible by astronauts for repair missions, the JWST is out of reach. It's possible that a future spacecraft could grapple with the James Webb to fix any gross deployment errors.

But components can't be replaced. In essence, there's only one chance to get the mirror and its sunshield deployed properly.

With this important test behind them, the engineers and technicians now have to carefully stow the sunshield into launch configuration, folding it into the exact position required for successful deployment. After that, more tests. 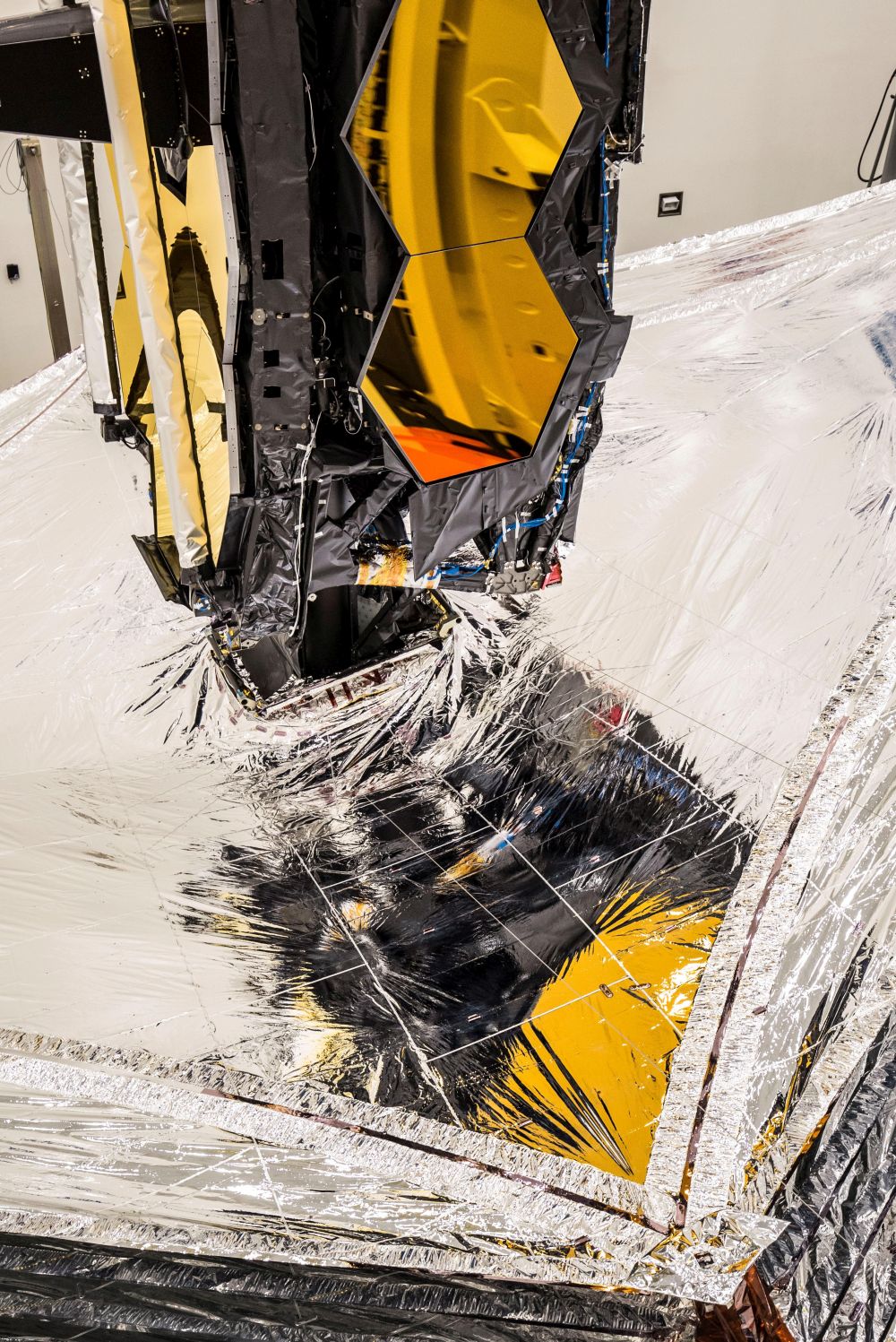 Each layer of the sun-shield are uniquely sized and shape. (Northrop Grumman)

There are still comprehensive electrical tests that need to be performed, as well as mechanical tests that mimic the forces the 'scope will experience during launch on the Ariane 5 rocket that will take it into space.

Then there'll be one more test of the James Webb's deployment, and a final stowing.

The launch is scheduled for March 30, 2021. There have been a series of delays for the JWST, which was originally supposed to launch sometime between 2007 and 2011.

Once it's in its halo orbit at L2, and if the deployment goes well, it'll do ground-breaking work. And hopefully we'll forget all the delays.