The Locust Plague in East Africa Is Sending Us a Message, And It's Not Good News

The coronavirus isn't the only thing plaguing East Africa. Amid a global pandemic, people in this region of the world are also contending with another "extremely serious" threat to their lives and livelihoods: locusts.

After one of the wettest years on record, these voracious insects have been gathering forces since 2019, as weather conditions allowed them to breed generation upon generation.

Swarming in the trillions, they are destroying precious pastures and crops in what is considered the worst regional locust plague in decades, from Kenya through Ethiopia and Yemen, reaching as far as parts of northern India.

While many are justifiably worried about famine and the economic fall-out of these swarms, entomologist Dino Martins sees them as a more existential warning from nature.

"As terrifying and as dramatic as they are," he told the Harvard Gazette in a recent interview, "there is a deeper message, and the message is that we are changing the environment."

Martins works at the Mpala Research Centre in northern Kenya, and he says there's no question about it: local environmental degradation, overgrazing, deforestation and the expansion of deserts are creating ideal conditions for more and more locusts to breed.

The first major swarms emerged late last year, after unusually warm and wet weather, and they numbered in the hundreds of billions. Come April, the next generation hit the skies, this time in the trillions. The third generation is expected to take off this July in even larger numbers.

"When you're in a swarm, especially if it's just as they're getting moving, it's actually quite an incredible experience, " Martins told the Harvard Gazette.

"You see, they change colour when they're young - they're more pinkish and then as they mature they become yellow - so when they are flying around you at that stage, you have all these pink and yellow wings whirring around and a slightly nutty smell of the locusts surrounding you and lots of birds feeding on them." 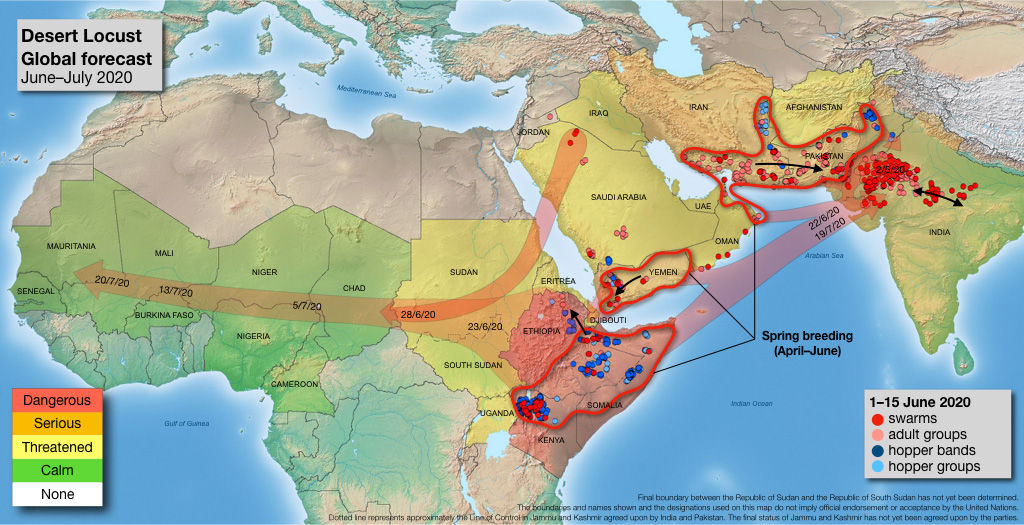 Today, these insects are commonly controlled with pesticides sprayed from helicopters overhead. But that route obviously comes with consequences to human health, and the health of our environment.

Climate change, after all, is altering our weather patterns and bringing more rain to this part of the world, which will only see locusts thriving more.

Rick Overson, who works at Arizona State University's Global Locust Initiative, told NPR recently that he thinks our current solutions are too small in scope. In the end, he says they will only tire us out.

"It's hard to maintain funding and political will and knowledge and capacity building when you have these unpredictable boom and bust cycles that could play out over years or decades," says Overson.

"The drama and spectacle of the outbreak right now is important to cover, but the more nuanced narrative involves the slow, ratchet method of building infrastructure: If you wait until it's reactive and forget about it until it happens again, we're going to be in this situation forever."

So far, over half a million hectares of land in this region of the world have been treated with pesticides, and, according to the Food and Agriculture Organization (FAO), that has saved enough crops to cover basic cereal requirements for nearly 8 million people.

But treating huge swathes of land with pesticides is terrible for biodiversity. Even if you don't care a thing for locusts, there are clearly other animals to consider. As farmers grow desperate to preserve their crops, more of them are indiscriminately spraying pesticides.

Bill Hansson, a chemical ecologist from the Max Planck Institute in Germany, told Bloomberg he's worried that we will kill other crucial insects, such as bees, in the process.

As heavy rains continue to undermine the efforts to control the locusts, the director general of FAO, Qu Dongyu, recently asked for time and cooperation.

"Our gains have been significant, but the battle is long and is spreading to new areas," Qu said. "It is clear that we cannot declare victory yet. Upsurges of this magnitude are rarely defeated in a few months."

In combination with COVID-19, Qu warned there could be catastrophic consequences on local livelihoods and food security.

Half a world away, Argentina is battling a separate locust swarm of huge proportions, and it's threatening to spill over to Paraguay, Uruguay and Brazil. Experts suspect this event might also be linked to climate change.