The search for alien life goes on, but our chances of hearing from extraterrestrial beings that are still alive are very slim, according to new research.

The problem is that civilisations likely don't last as long as signals travelling through space.

These latest calculations are an update of the legendary Drake equation, first proposed in 1961 by Frank Drake at the National Radio Astronomy Observatory in West Virginia, as a shorthand way of calculating how much alien life could be out there.

Using variables such as the number of stars born each year, the number of potentially habitable planets they have, and the chances of organic life developing, the equation gives us some idea of the likelihood of receiving signals from beyond Earth. 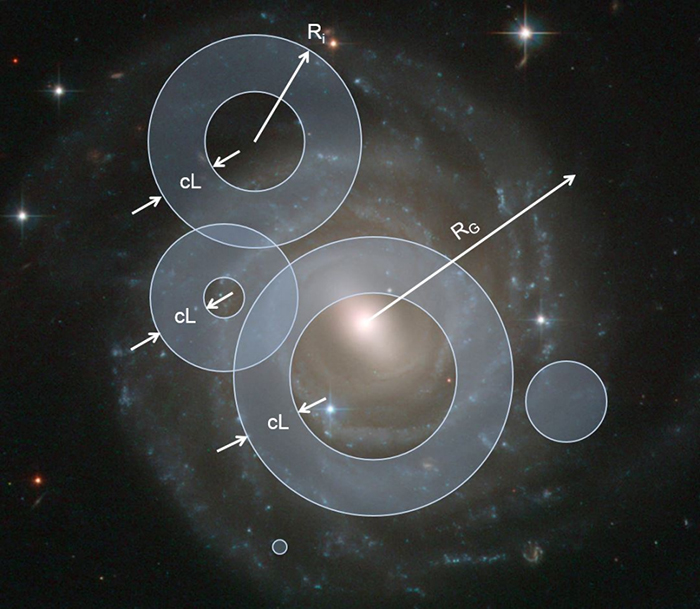 A model of signal spread. (arXiv.org)

And according to the newly updated numbers, it's not looking promising.

"If the civilisation emitted from the other side of the galaxy, when the signal arrives here, the civilisation will already be gone," one of the team, Claudio Grimaldi from the Federal Polytechnical School of Lausanne in Switzerland, told Lisa Grossman at Science News.

Each of the variables in the Drake equation are open to debate, but the scientists assumed a civilisation lifespan of 100,000 years as a marker, which is how long it takes light to cross the galaxy. Even an alien empire that lasted that long would only fill "a small fraction" of the galaxy with signals, the study determines.

For reference, we've been sending signals out into space for 80 years now, and those rippling signals will only have covered under 0.001 percent of the Milky Way.

What's more, given the frequency of the signals we send out into space, an alien civilisation would need to be within 50 light-years for us to have heard back from them at this point, the researchers found.

While a hardy group of aliens who survived longer than 100,000 years could fill the galaxy with bouncing signals, there could again be gaps if new civilisations don't spring up often enough to fill them, the data shows.

Another interesting finding was that the number of extraterrestrial signals crossing Earth at any one time should correspond to the number of civilisations currently broadcasting, whether or not the signals we're hearing are from past or current civilisations. The researchers are still writing up their thoughts on that one.

The aim of all these calculations is to get a better perspective on our lack of contact with alien lifeforms so far. Is it because no one else is out there? Or is it because we just have a very low chance of hearing anything?

Eventually the researchers hope that the revised Drake equation can help us improve our chances of finding radio signals in space, perhaps through an improved understanding of where to point our telescopes.

This is still all preliminary though – the paper produced by the team has yet to be peer-reviewed by other scientists, though it is available online.

For now though, we shouldn't expect to be hearing signals from alien lifeforms that are still around – at least not with an assumed civilisation lifespan of 100,000 years.

"The transmissions arriving at Earth may come from distant civilisations long extinct, while civilisations still alive are sending signals yet to arrive," write the researchers.

You can read the research paper on the pre-print server arXiv.org.