The most powerful kind of cosmic explosions known to science are called gamma-ray bursts – aka 'death from space' – galactic events so fierce their awesome intensity is only surpassed by the Big Bang itself.

Now, an international team of astronomers has observed one of these violent outbursts of energy in unprecedented detail, witnessing a distant, giant star in its destructive death throes like never before.

"Gamma-ray bursts are catastrophic events, related to the explosion of massive stars 50 times the size of our Sun," explains one of the researchers, Eleonora Troja from the University of Maryland.

"In a matter of seconds, the process can emit as much energy as a star the size of our Sun would in its entire lifetime."

These intense flashes are thought to occur all the time, but thankfully they usually take place in galaxies billions of light-years away from Earth, sparing us from intense jets of particles thrust at the speed of light from collapsing stars.

Because we don't get any fore-warning of these bursts, it's not easy for scientists to observe them – given the events usually only last a matter of seconds, if that.

What made this incredibly bright burst different was that its tight beam of gamma rays was aimed by chance at Earth, enabling our telescopes to pick it up and respond in real time.

"Gamma ray bursts occur completely randomly in space and time, so we cannot predict where or when one will appear," one of the team, Carole Mundell from the University of Bath in the UK, told IBTimes UK.

"It was very bright and produced a very short flare that lasted just 1 second before the main explosion began, so our telescopes were ready to capture the visible light at the same time as the high-energy gamma rays from the explosion itself. It was so bright, it could have been seen through binoculars. This is rare." 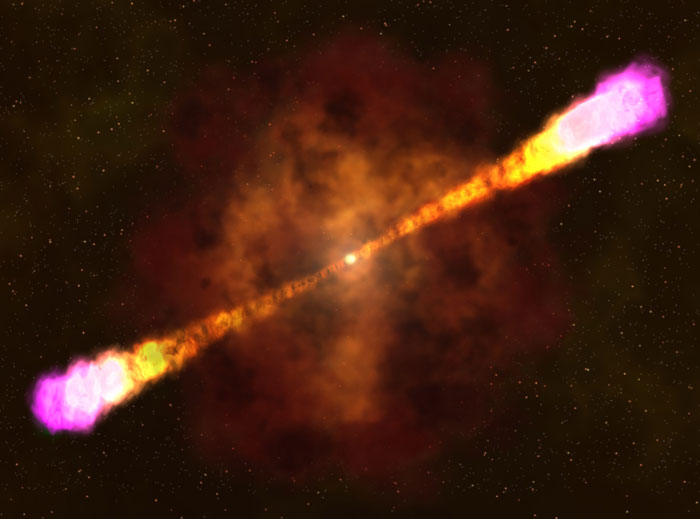 The unprecedented observation of the event – which took place on 25 June 2016 and is called GRB 160625B – could help us understand how gamma-ray bursts come to occur at all.

Scientists think that these explosions happen when a dying star collapses to become a black hole. As this process takes place, particle jets are blasted outward in a beam, but up until now, researchers weren't sure if the jets were controlled by matter, or by a magnetic field produced by the black hole.

The new study suggests a compromise is the most accurate view of the phenomenon.

"There has been a dichotomy in the community. We find evidence for both models, suggesting that gamma-ray burst jets have a dual, hybrid nature," Troja explains in a statement.

This blast, detected by NASA's Fermi Gamma-ray Space Telescope and observed soon after by Russia's MASTER-IAC telescope at the Teide Observatory in Spain's Canary Islands, also revealed that the initial, brightest phase of the burst is prompted by a kind of radiation called synchrotron radiation, which occurs when electrons are accelerated in a curved or spiral path.

Scientists had previously speculated that two other forms of radiation – black-body radiation and inverse Compton radiation – might be responsible, but the level of polarisation in the light burst produced by GRB 160625B suggests synchrotron radiation is the most likely candidate.

That insight could help to clear up decades of mystery over what drives gamma-ray bursts, but the researchers acknowledge there's still a lot we don't know about these intense beams.

Learning more will require us to catch of a glimpse of another violent explosion being unleashed in a (hopefully) very far away place – but as the researchers admit, there's no way of telling just when that might be, nor whether it will be as instructive as the singular brilliance of GRB 160625B.

"Any amateur astronomer with just binoculars looking in the right part of the sky could have recorded the explosion," Troja explained to Ryan F. Mandelbaum at Gizmodo.

"It was really, really bright, and it also lasted for a very long time… it was such a unique event."