Mysterious 'Cat-Fox' May Be a Newly Discovered Species, Researchers Say

On the French island of Corsica in the Mediterranean, a strange, rarely seen beast stalks the night. Locals call it ghjattuvolpe - the cat-fox - and for the last decade, scientists have been hot on its trail, trying to unravel the mystery.

Now agents with France's National Hunting and Wildlife Office (ONCFS) have revealed their work to the world - a wild cat they think might be a previously unknown species.

"We believe that it's a wild natural species which was known but not scientifically identified because it's an extremely inconspicuous animal with nocturnal habits," ONCFS environmental technician Pierre Benedetti told AFP.

The feline had been a local legend for years, a predator that would attack the udders of sheep and goats at night. But when one was accidentally trapped in a chicken coop overnight in 2008, that caught the attention of researchers.

In 2012, they set out snares for the animals' DNA - wooden sticks to which the cats were lured with an attractive scent. When they rubbed their bodies against the sticks, they left tufts of fur behind, perfect for genetic identification.

"By looking at its DNA, we could tell it apart from the European wildcat, Felis silvestris silvestris," Benedetti said. "It's close to the African forest cat, F. silvestris lybica, but its exact identity is still to be determined."

In 2016, they captured their first cat; since then, they have seen a total of 16 and captured 12 of the cats, tagging them with electronic chips to track their comings and goings, including a particularly striking male with one golden and one brown eye - the result of an injury from fighting with another male.

It may have been living on Corsica for 6,500 years, since the time of the second human colonisation of the island.

If this is true, it points to a Middle Eastern origin for the cat, the researchers said.

So what the heck is this cat-fox? Well, it's nothing to do with foxes, we can tell you that much. In fact, it would actually be impossible for a canid and a felid to hybridise, as some outlets are reporting. 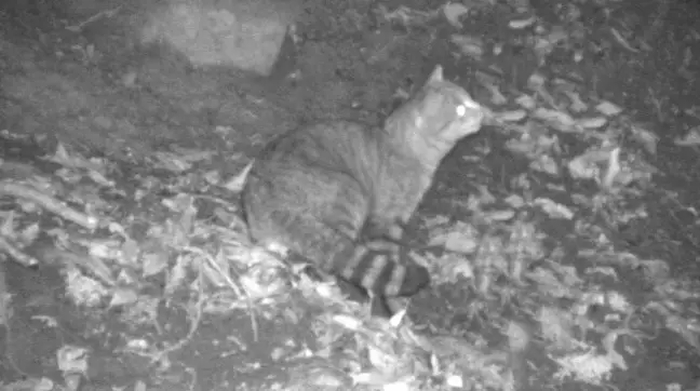 It has a dense coat that protects against fleas and ticks, stripes on the front legs, very dark hind feet, a red-coloured belly, black rings around the tail, and a black tail-tip.

"It's their size and their tail that earned them the name 'cat-fox' across the island," Benedetti said.

But it might not be an entirely 'new' species, either. Just as the mystery canid discovered in Montana last year was expected to be a wolf-dog hybrid (it turned out to be just a plain old wolf), the ghjattuvolpe may yet turn out to be a hybrid of two feline species - perhaps one of them the Sardinian wildcat (F. lybica sarda).

If this cat really is a hybrid, it seems that hybridisation could have indeed produced a distinct species. This is called hybrid speciation, and it is not an unusual way for new species to develop.

At any rate, the animal is a fascinating one. Benedetti and his team hope to have it both recognised and protected as a new species ASAP.