Temperatures near the North Pole are an unheard of 36°F (20°C) warmer than average right now, researchers have reported.

The Arctic is currently in the midst of polar night, where the Sun hardly ever rises. Usually, it's the time when things get really cold and vast, thick ice sheets form for the winter.

But this year, temperatures are much warmer than usual – while the weather stations around the North Pole record the biggest difference, even in parts of Arctic Russia, temperatures are up to 12.6°F (7°C) warmer. 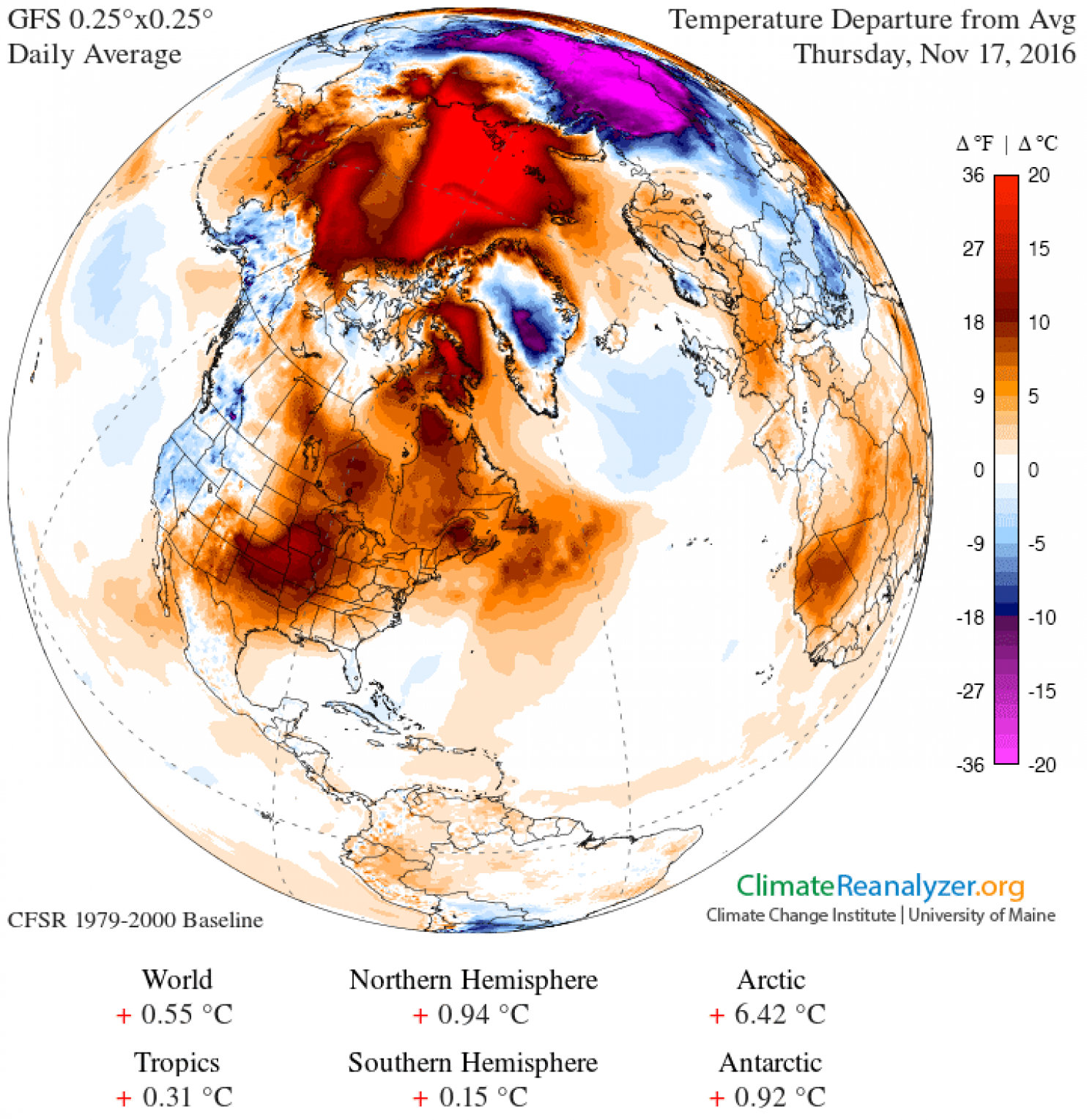 And even though sea ice is forming again after reaching its annual low in September, it's doing so much slower than usual.

In fact, so far the amount of ice coverage is even lower than the record-breaking low of 2012. Scientists have taken to Twitter to express their concern over just how bad the situation is getting.

"In parts of Arctic Russia, temperatures were 10.8 to 12.6°F [6°C to 7°C] above the long-term average," said Petteri Taalas, the Secretary-General of the World Meteorological Organisation (WMO).

"Many other Arctic and sub-Arctic regions in Russia, Alaska, and northwest Canada were at least 5.4°F [3°C] above average," he added.

"We are used to measuring temperature records in fractions of a degree, and so this is different."

This is the second year in a row that temperatures near the North Pole have been unusually high.

At the end of 2015, the Arctic temperature spiked almost to melting point because of a massive storm pumping warm air into the region.

So what's causing all this unusual variation?

Arctic specialist at Rutgers University, Jennifer Francis, told The Washington Post that it's related to climate change around the rest of the planet – the WMO last week declared that 2016 will most likely be the hottest year on record.

"The Arctic warmth is the result of a combination of record-low sea-ice extent for this time of year, probably very thin ice, and plenty of warm/moist air from lower latitudes being driven northward by a very wavy jet stream," Francis told The Washington Post.

Meteorologist Richard James, who writes a blog on Alaskan weather, has been tracking 19 weather stations around the Arctic Ocean over the past few months, and has shown that the area has been flooded with warm air since October.

"So far the lowest daily high temperature this season is 22°F [–5.6°C], which shows a remarkable absence of cold," he writes.

It's not yet clear how this unprecedented weather pattern will affect local wildlife, such as polar bears, which descend on the Arctic around this time to hunt on the sea ice.

If it's not thick enough to take their weight, it could be disastrous for the population.

It also remains to be seen whether or not this warm Arctic weather will affect the polar vortex that usually descends over the polar region during winter.

Researchers will continue to monitor the situation closely, so watch this space. And let's all hope that the Arctic gets some cold days soon, otherwise we could be entering yet another record-breaking era of climate change, for all the wrong reasons.

Update 19 November: We've corrected some of the temperature conversions to accurately show temperature difference, rather than static temperature.