Snakes may not have any limbs, but it doesn't stop them from getting around. By wiggling their bodies to-and-fro, these crafty creatures can easily dash across land or water without the need for feet or fins. Some can even fly.

Jake Socha is an expert on the paradise tree snake (Chrysopelea paradisi), which lives in Southeast Asia and is known to throw itself willy-nilly from the tops of tree branches to the ground below.

Socha has been studying these creatures for over 20 years, and while he admits the snakes aren't exactly flying in the typical sense of the word, their strategic glides are still an impressive feat for an entirely limbless animal.

When the paradise tree snake lets go of a high perch, its body ripples through the air in a series of curious contortions that can sometimes see it landing upright several feet away.

"We know that snakes undulate for all kinds of reasons and in all kinds of locomotor contexts," says Socha, who works in biomedical engineering at Virginia Tech.

"That's their basal program… It's quite possible that a snake gets into the air, then it goes, 'What do I do? I'm a snake. I undulate.'"

But Socha suspects there's more to it than that. Creating a 3D model of this snake's mid-air undulations, he and colleagues have shown these wiggles are crucial for dynamic stability in flight, keeping the snakes gliding upright for longer.

Without these aerial acrobatics, the team's results suggest the paradise tree snake wouldn't get far at all. In fact, it would probably plummet head-first to the ground, or land in some other odd and potentially dangerous orientation. 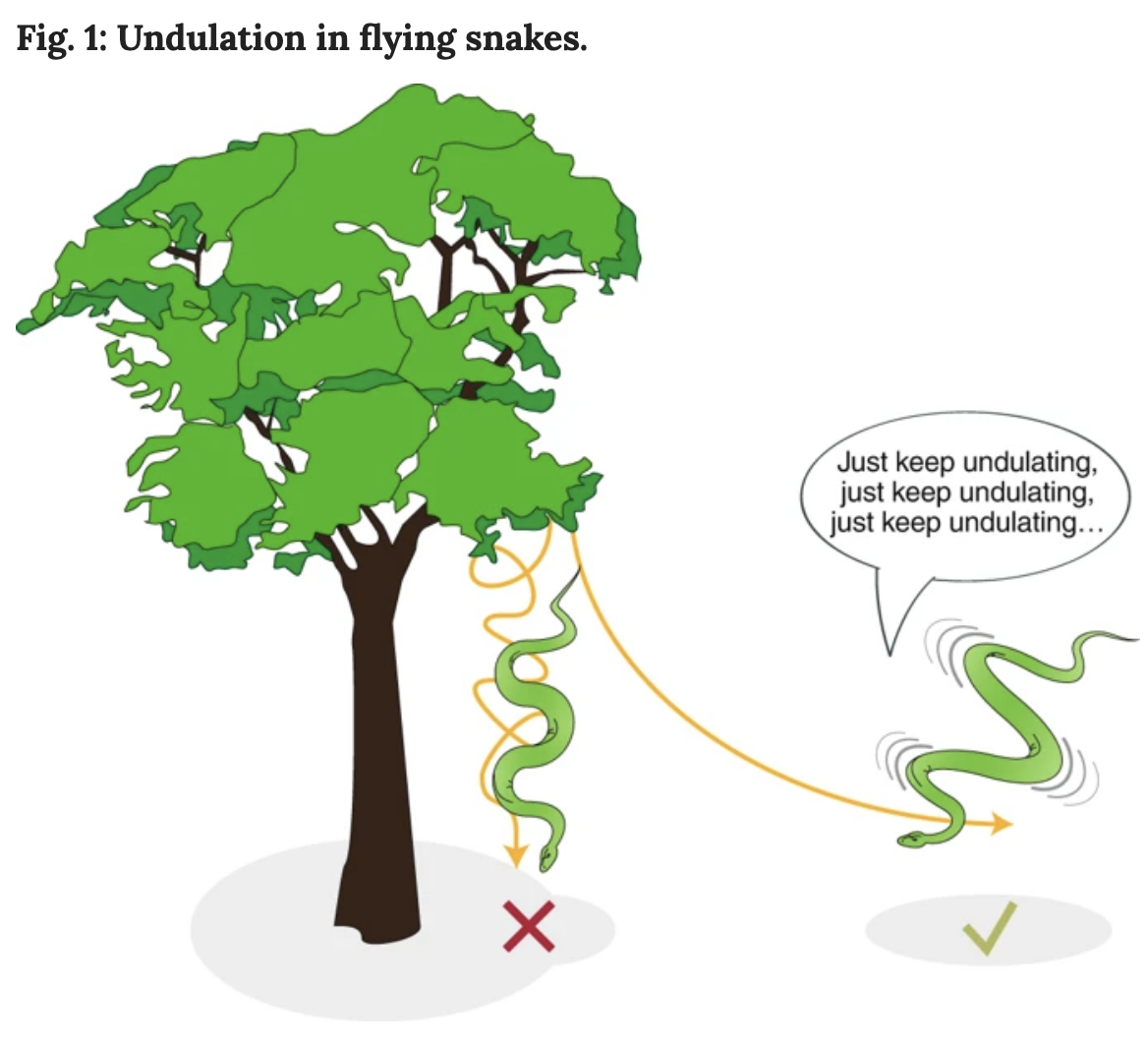 "What really makes this study powerful is that we were able to dramatically advance both our understanding of glide kinematics and our ability to model the system," says mechanical engineer and lead author of the study, Isaac Yeaton from Virgina Tech.

"Snake flight is complicated, and it's often tricky to get the snakes to cooperate. And there are many intricacies to make the computational model accurate. But it's satisfying to put all of the pieces together."

The study began in 2015, when researchers transformed The Cube, a four-story black-box theatre with 23-high speed cameras used to capture drama and dance movements, into an indoor glide arena.

The stars of the show in this case, however, were the snakes. Placing infrared reflective tape on their bodies at various locations, researchers were able to use the motion capture system to record their movements from all angles.

Using between 11 and 17 points of reference from head to tail, the team watched as seven different paradise tree snakes jumped from an 8.3-metre-high (27-foot) oak branch to an artificial tree below.

"With this number [of reference points], we could get a smooth representation of the snake, and an accurate one," explains Socha.

Capturing data from over 130 live glides, the team built a continuous, three-dimensionally accurate representation of the snake and its aerodynamics.

By manipulating this dynamic model, the researchers then tested how certain ripples of movement, both horizontally and vertically, impact the snake's fight.

When undulating, the team noticed that a gliding snake's smaller vertical wave went at twice the rate of its larger horizontal wave - the same frequency as a sidewinder snake, which traverses the land in a freakily similar way.

This undulation, the authors explain, is a bit like a frisbee's spin: it keeps the snake upright while gliding through the air, rather than being quickly unbalanced by the forces of drag and lift.

For short glides, where simulated snakes jumped from heights of 10 metres (32 feet), nearly all the glides with undulation were stable. Whereas only half of them were stable without undulation.

This knowledge doesn't just tell us more about snakes; it could be a boon for the field of robotics, since snakes are excellent at moving through complex environments - something we want robots to do as well.

"Evolution is the ultimate creative tinkerer," says one of the team, aerospace and ocean engineer Shane Ross. "We're excited to continue to discover nature's solutions to problems like this one, extracting flight from a wiggling cylinder."

Jim Usherwood, who studies locomotor biomechanics and was not involved in this research, thinks the new data is useful in that it shows us how undulation can achieve stability. Still, he thinks there are a few questions that remain.

"Is undulation during glides adopted for stabilisation? Or is it merely a behavioural remnant of snake locomotion? Probably this is a false dichotomy: both may well be true," he writes in a Nature News & Views piece accompanying the new study.

"As ever, interpreting why animals have evolved certain shapes and behaviours, especially in relation to stability, must be treated with caution," continues Usherwood, who works at The Royal Veterinary College in London.

The study was published in Nature Physics.