A 25-year-old student has come up with a way to fight drug-resistant superbugs without antibiotics.

The new approach has so far only been tested in the lab and on mice, but it could offer a potential solution to antibiotic resistance, which is now getting so bad that the United Nations recently declared it a "fundamental threat" to global health.

Antibiotic-resistant bacteria already kill around 700,000 people each year, but a recent study suggests that number could rise to around 10 million by 2050.

In addition to common hospital superbug, methicillin-resistant Staphylococcus aureus (MRSA), scientists are now also concerned that gonorrhoea is about to become resistant to all remaining drugs.

But Shu Lam, a 25-year-old PhD student at the University of Melbourne in Australia, has developed a star-shaped polymer that can kill six different superbug strains without antibiotics, simply by ripping apart their cell walls.

"We've discovered that [the polymers] actually target the bacteria and kill it in multiple ways," Lam told Nicola Smith from The Telegraph. "One method is by physically disrupting or breaking apart the cell wall of the bacteria. This creates a lot of stress on the bacteria and causes it to start killing itself."

The research has been published in Nature Microbiology, and according to Smith, it's already being hailed by scientists in the field as "a breakthrough that could change the face of modern medicine".

Before we get too carried away, it's still very early days. So far, Lam has only tested her star-shaped polymers on six strains of drug-resistant bacteria in the lab, and on one superbug in live mice.

But in all experiments, they've been able to kill their targeted bacteria - and generation after generation don't seem to develop resistance to the polymers.

The polymers - which they call SNAPPs, or structurally nanoengineered antimicrobial peptide polymers - work by directly attacking, penetrating, and then destabilising the cell membrane of bacteria.

"With this polymerised peptide we are talking the difference in scale between a mouse and an elephant," Lam's supervisor, Greg Qiao, told Marcus Strom from the Sydney Morning Herald. "The large peptide molecules can't enter the [healthy] cells."

You can see the SNAPPs (green) surrounding and ripping apart bacterial cells below: 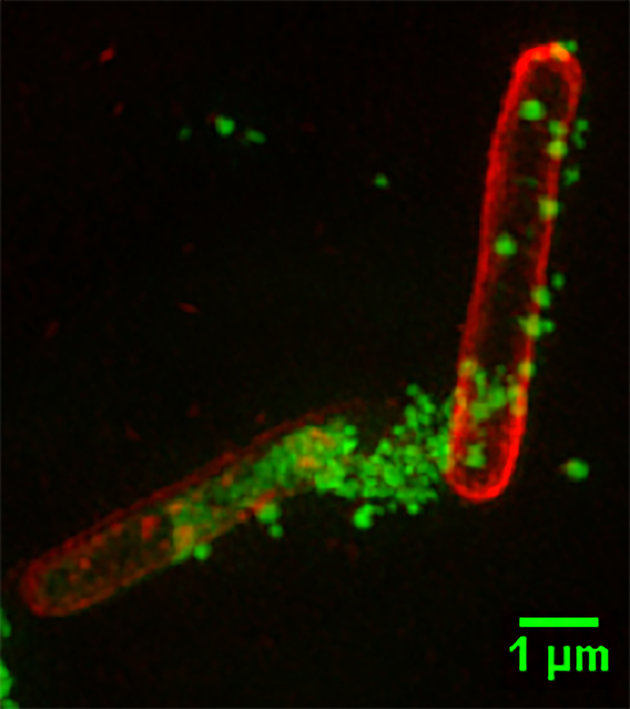 While the results are positive so far, it's too early to get excited about what this could mean for humans, says Cyrille Boyer from the University of New South Wales in Australia, who wasn't involved in the research.

"The main advantage seems to be they can kill bacteria more effectively and selectively [than other peptides]" Boyer told Strom, before adding that the team is a long way off clinical applications.

But what's awesome about the new project is that, while other teams are looking for new antibiotics, Lam has found a completely different approach. And it could make all the different in the coming 'post-antibiotic world'.

"For a time, I had to come in at 4am in the morning to look after my mice and my cells," she told The Telegraph. "I wanted to be involved in some kind of research that would help solve problems … I really hope that the polymers we are trying to develop here could eventually be a solution."