We Might Finally Understand Why Glass Frogs Have Strangely Transparent Skin

Glass frogs are strange creatures – much of their body is 'transparent', allowing you to literally see the organs inside. And now researchers may have figured out why this is the case.

According to scientists the see-through skin of glass frogs isn't really an example of true transparency, since the 'glass' skin isn't uniformly distributed across their body, being largely found on their underside, while the skin on their back features a greater amount of pigmentation.

A new study examining this "imperfect transparency" suggests the trait observed in glass frogs – better described as 'translucency' – could be an unidentified kind of camouflage mechanism in animals, representing perhaps the next best thing to true transparency.

"It is relatively common in aquatic species where animal tissue shares a similar refractive index [how fast light travels through it] to the surrounding water." 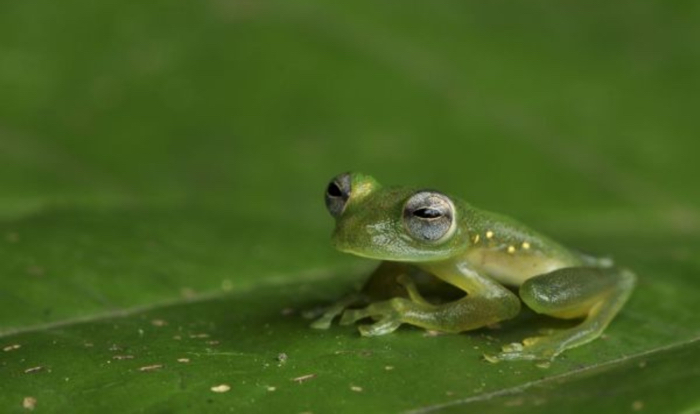 On land, transparency in animals is a rarer phenomenon, with glass frogs and glasswing butterflies representing the most well-known examples.

But while the see-through wings of certain butterflies and moths are thought to confer advantages in hiding from predators, it's less clear whether the semi-transparency of glass frogs affords the same kind of camouflage benefit.

In some lizards, translucency is even used as a means of increasing visibility, research suggests, with animals orientating translucent dewlaps - throat fans - to be backlit by the Sun, the better to broadcast their mating intentions, perhaps.

In glass frogs, the translucency appears to serve a very different purpose, and one based more around survival than sex.

"The frogs are always green but appear to brighten and darken depending on the background," Barnett says. "This change in brightness makes the frogs a closer match to their immediate surroundings, which are predominantly made up of green leaves."

The effect is amplified by the amphibians' legs being more translucent than the skin on their upper body. When glass frogs are at rest against a green backdrop, with their legs tucked to their sides, the translucent limbs serve as a visual buffer, softening the contrast in colour between the disparate green shades of the frog's body and the leaf it's sitting on. Above: Espadarana prosoblepon (emerald glass frog) from Ecuador, on white and leaf backgrounds.

"This creates a diffuse gradient from leaf colour to frog colour rather than a more salient sharp edge," Barnett says.

This camouflage mechanism, which the researchers call 'edge diffusion', looks to be more than just hypothetical.

In an experiment, designed to determine how effective translucency is at hiding glass frogs, over 50 of the animals were photographed against both leafy-green and white backgrounds, while computer models (simulating the vision capabilities of animal predators and humans) tried to discern the amphibians.

The tests showed that the perceived luminance - intensity of light emitted - of the frogs changed depending on what background they're up against.

"This change in perceived luminance then transforms the frogs' salient high-intensity outline into a less-conspicuous graduated boundary," the authors explain in their paper.

"Thus, the imperfect glass of the glass frog provides effective camouflage, disguising the frogs' outline and blending the frog and the leaf more smoothly together."

In another experiment, human participants had to spot frogs in computer-generated images of the animals tweaked to display different amounts of translucency. On the whole, the participants were quicker to identify the frogs with opaque features than those with translucent elements.

Finally, to test whether the demonstrated camouflage of translucency also conferred survival advantages in the wild, the team created hundreds of fake frogs made from gelatin, half being translucent and half rendered opaque through the use of food dyes.

These artificial amphibians were dropped into a site in Ecuador where glass frogs are common, and left for 72 long hours at the mercy of wild predators. At the end of the experiment, significantly fewer of the translucent models had been eaten compared with the opaque frogs, suggesting glass frogs do receive a camouflage advantage by virtue of their semi-transparent bodies.

Ultimately, the translucency effect might not be as remarkable as the incredible colour changing evidenced by other kinds of creatures, such as geckos, but it seems to do the job for the glass frog.

"In truth, we are only beginning to unravel how different forms of camouflage actually work," explains behavioural ecologist Innes Cuthill from the University of Bristol in the UK.

"Glass frogs illustrate a new mechanism that we hadn't really considered before."