The 3rd Leading Global Cause of Death Is Likely Not What You Think, New Study Reveals

Antibiotic resistance is often seen as a 'future problem', but newly published data have revealed it's affecting far, far more lives than you might imagine.

In fact, the new estimates show that in 2019, there were 4.95 million deaths associated with bacterial antimicrobial resistance, making it the third leading cause of death worldwide.

Drugs that kill bacteria are undeniably one of humanity's greatest discoveries. Since Alexander Fleming discovered antibacterial activity in the fungi Penicillium all the way back in 1928, we no longer have to worry about death from rose bush scratches or gonorrhea. In the decades following, antibiotics have saved millions and millions of lives worldwide.

But bacteria have been developing resistance to antibiotics long before we started using them, as they're a naturally evolved biological weapon for warfare between microbes. Continually using the same antibiotics over and over provides bacteria with the opportunity to adapt to them even faster, leading to an increasing number of infections no longer responding to traditional (or even last-resort) antibiotics.

Unfortunately, the more bacterial species don't respond to antibiotics, the more patients will succumb to resistant infections – and researchers are sounding the alarm that we're now annually losing more people to antimicrobial resistance than to HIV/ AIDS or malaria.

"These new data reveal the true scale of antimicrobial resistance worldwide, and are a clear signal that we must act now to combat the threat," says University of Washington health economist Chris Murray, who co-authored the new research.

"Previous estimates had predicted 10 million annual deaths from antimicrobial resistance by 2050, but we now know for certain that we are already far closer to that figure than we thought. We need to leverage this data to course-correct action and drive innovation if we want to stay ahead in the race against antimicrobial resistance."

The researchers analyzed data on 23 different bacterial species (including E. coli, S. pneumoniae and S. aureus) and 88 microbe-drug combinations from 204 countries. This ended up covering 471 million records of infection, which they then used to create statistical models to estimate the scale of antimicrobial resistance.

The team explored two counterfactual scenarios. In the first, all drug-resistant infections were replaced with no infections, which the team explained is the number of deaths associated with antimicrobial resistance.

In the second scenario, they replaced all drug-resistant infections with drug-susceptible infections, leading to an estimation of deaths directly caused by antimicrobial resistance.

The team concluded that in 2019, 4.95 million deaths were associated with drug-resistant bacterial infections, of which 1.27 million deaths were directly caused by antimicrobial resistance – a huge burden in all areas of the world, but particularly impacting low- and middle-income countries. 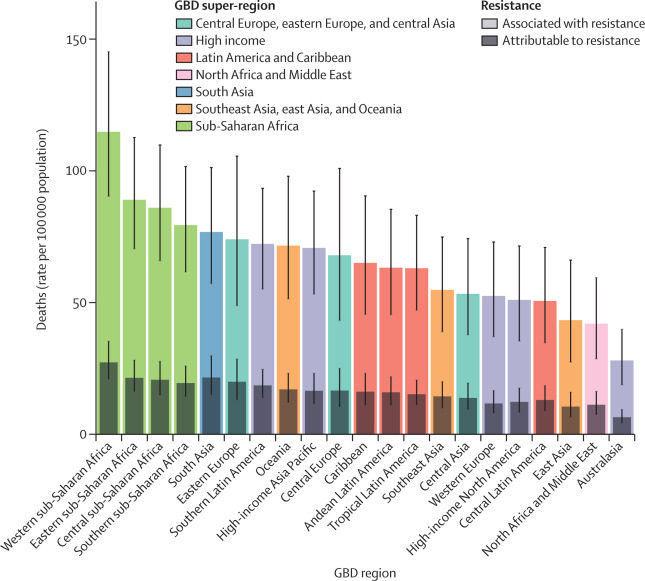 Rate of deaths attributable to and associated with bacterial antimicrobial resistance in 2019. (Antimicrobial Resistance Collaborators, The Lancet, 2022)

These calculations suggested that only stroke and heart disease caused more deaths than antimicrobial resistance that year.

The authors note that, to their knowledge, this is the first time such a global estimate has been carried out at all. Because there are gaps in data from some parts of the world, and serious difficulties in carrying out the surveillance of antimicrobial resistance, there are some limitations to their modelling. But the conclusion is clear: we have a major global health problem.

"Innovation has been extremely slow. Vaccines are available for only one of the six leading pathogens described in the study. The clinical pipeline for antibiotics is too small to tackle the increasing emergence and spread of antimicrobial resistance."

The authors of both the editorial and the original study urge leaders to move antimicrobial resistance higher up on their agendas. Without urgent action, they caution, we'll be seeing even higher levels of preventable deaths in the years to come.

The research has been published in The Lancet.