The Triassic-Jurassic extinction event that ended the Triassic period and brought in the Jurassic around 200 million years ago was one of the biggest mass extinctions in the history of our planet.

In total, around 25-34 percent of marine genera are thought to have been lost during the event, and many land groups wiped out, clearing the way for dinosaurs and pterosaurs to dominate on Earth for the next 135 million years or so.

But new research suggests this extinction event occurred later than initially thought, and sheds new light on the contributing factors.

The most widely accepted hypothesis of the Triassic–Jurassic event blames huge volcanic eruptions for the loss of life that happened on the planet, though other ideas – such as asteroid strikes and more gradual climate change – have also been put forward.

To get a better idea of what happened, the new study looked at molecular fossil biomarkers from rocks in the Bristol Channel off the coast of England, which at that time was part of the supercontinent Pangaea.

The samples showed evidence of ancient microbial mats – complex communities of microorganisms that preserve indicators of the atmospheric conditions at the time.

The shifts in ecosystem in this particular part of the UK and central European water basins have long been used as an indicator of what happened, with a sudden drop in organic carbon-13 thought to have been an initial sign of the atmospheric changes that led to this event.

However, it turns out this was not a direct indicator of the Triassic–Jurassic event, the scientists say – but instead the changes came from shifts in sea level and desalination of the water, which created the perfect conditions for these microbial mats to thrive.

These changes put the organic make-up of the ocean into a transitional phase, but the researchers show that it was tens of thousands of years later, during the late Rhaetian, that the extinction event began in earnest.

"Through our analysis of the chemical signature of these microbial mats, in addition to seeing sea-level change and water column freshening, we discovered the end-Triassic mass extinction occurred later than previously thought," says geochemist Calum Peter Fox, from Curtin University in Australia.

However the drop in sea level the team detected may have been a sign of the initial movements in Earth's tectonics that would lead to these future eruptions, and the eventual breakup of Pangaea.

This agrees with the findings of another study that showed magmatic activity was occurring in this region 100,000 years before the earliest known eruption associated with the extinction event.

Peering back through so many millions of years is a difficult and challenging process, but the fossil records that remain on Earth give us an invaluable record of what atmospheric conditions were like when these mass extinctions happened. 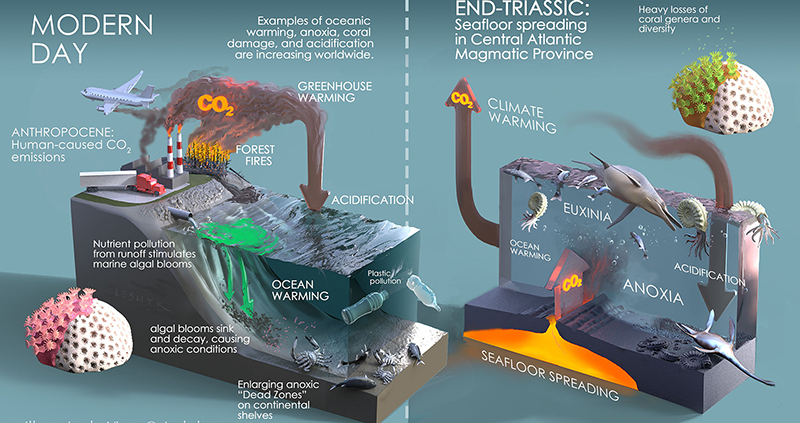 Climate change in action, then and now. (Curtin University)

As with most work looking into the history of life and climate on our planet, the findings from this latest study can also be used to inform our understanding of how the climate is changing today.

"Knowing more about the carbon dioxide levels present during the end-Triassic mass extinction event provides us with important details that could help protect our environment and health of our ecosystems for future generations."