We just got our best views yet of the eerie alien aurora on Mars.

The United Arab Emirates' Hope orbiter, which arrived at the red planet earlier this year, used its ultraviolet spectrometer to catch glowing structures of glowing atomic oxygen high up in the Martian night sky.

"The full set of data collected during these observations include far and extreme ultraviolet auroral emissions which have never been imaged before at Mars," the UAE Space Agency wrote in an update to the Hope website.

The Martian aurora is both like and unlike the aurora seen here on Earth. It's unlike in that Mars's aurora has yet to be seen in a spectrum visible to the naked eye; so far, only instruments that can see across ultraviolet wavelengths have been able to make them out. 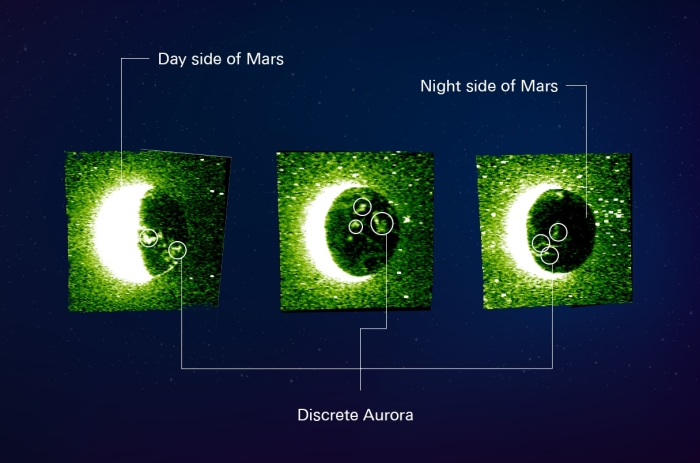 However, they are generated in the same manner as Earth's auroras. Particles from the solar wind streaming through space enter the Martian atmosphere, and interact with gas in the upper atmosphere - oxygen, in Mars's case. The resulting ionization causes the oxygen to glow.

On Earth, these ionized particles travel along our planet's magnetic field lines towards the poles, which is why auroras tend to occur at higher latitudes.

But Mars's global magnetic field decayed fairly early on in the planet's history, leaving behind only patches of magnetism preserved in magnetized minerals in the crust, which means the auroral distribution is quite different.

"The beacons of light that stand out against the dark nightside disk are highly structured discrete aurora, which traces out where energetic particles excite the atmosphere after being funneled down by a patchy network of crustal magnetic fields that originate from minerals on the surface of Mars," the UAE Space Agency explained.

Because we've never seen such detailed, discrete auroral structures in the Martian atmosphere before, the images could represent a new tool for mapping and understanding the loss of Mars's magnetic field.

The patches that remain are vestiges of that global magnetic field, recorded in magnetic minerals in molten rock that take on the polarity of the ambient magnetic field when they cool and solidify.

UAE scientists plan to publish an analysis of their observations and what they could mean for the study of Mars going forward.