These 10 Questions Are Used to Test The US Public's Knowledge of Science. How Many Can You Answer?

Every two years, the National Science Foundation (NSF) is required to tell the president how the US is doing in regard to science and engineering.

The news is OK, but not great. Americans are increasingly interested in environmental issues, the report says, and relative to previous years, they're expressing more concern about climate change and humanity's role in it.

They also trust scientists more than roles in any other institution aside from the military.

But the US lags behind dozens of countries in the rate of awarding bachelor's and advanced degrees in science, technology, maths, or engineering.

The American public also isn't doing much better on 10 simple questions the NSF asks to test the public's understanding of science.

Scroll down to see the questions the NSF asked for the latest report, see how many answers you can get right, and then compare how 11 countries who asked the same science questions performed.

True of False? The center of the Earth is very hot.

True. Scientists estimate that Earth's core is more than 10,000 degrees Fahrenheit – nearly the temperature found on the surface of the Sun.

True of False? The continents have been moving their location for millions of years and will continue to move.

True. Plate tectonics is the science of how continent-size slabs of crust form Earth's outermost layer and constantly move and regenerate.

Most move less than a couple inches per year, according to Pacific Northwest Seismic Network, though the process may be essential to making a rocky planet habitable to life.

A. We know this is true on a basic level because we can see the position of the stars change over time.

The space age has also required us to intimately understand this fact – and acknowledge our puny existence in the cosmos via stunning pictures of Earth from afar. 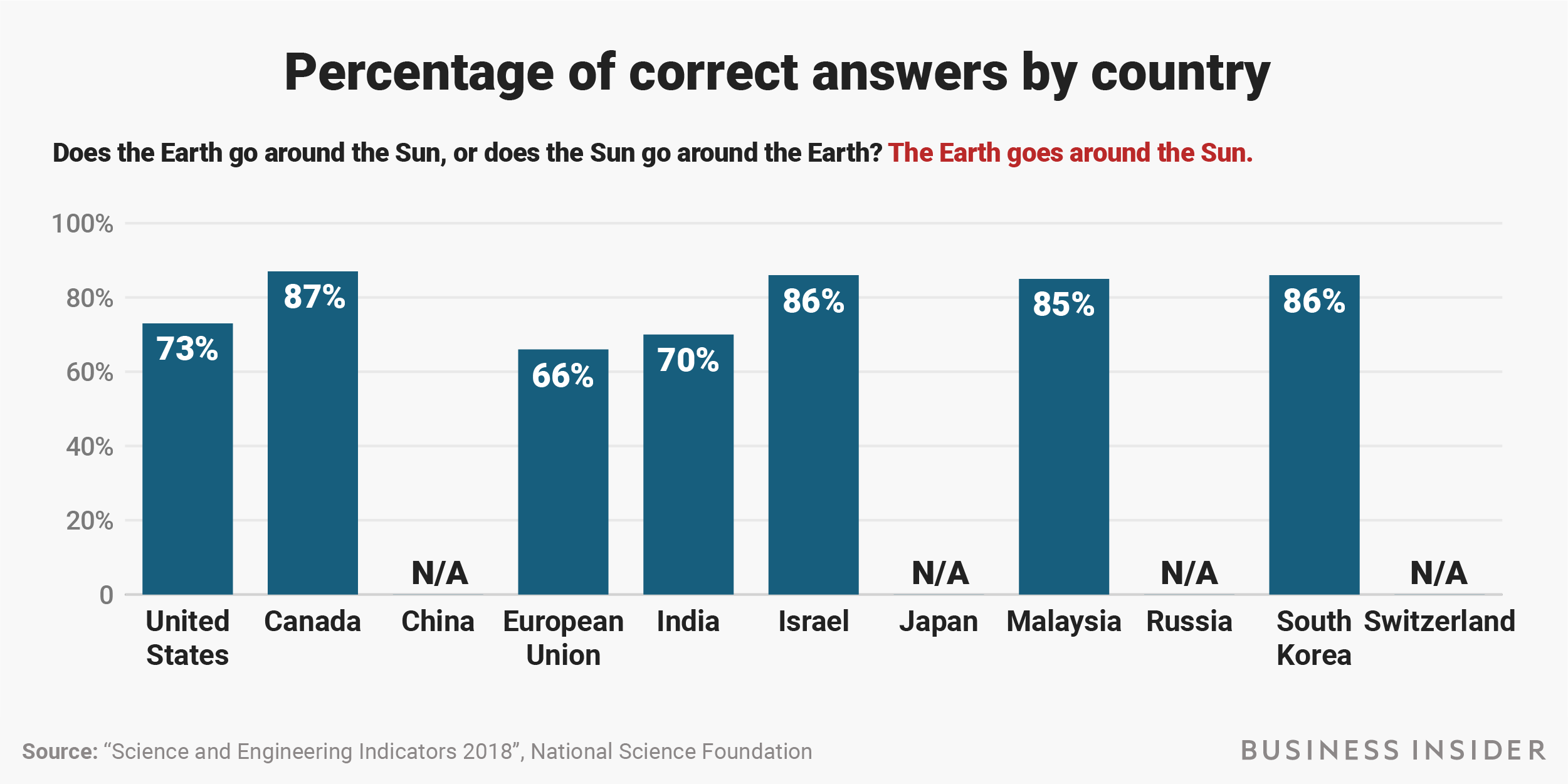 True of False? All radioactivity is man made.

Even a portion of the potassium found in bananas is radioactive.

True of False? Electrons are smaller than atoms.

True. Electrons are much less massive than the protons and neutrons that make up the cores of atoms.

True or False? The universe began with a huge explosion.

True (with a caveat). This is the best theory that we have as to how the universe began: a point of infinite density at the beginning of the universe began to expand and created the galaxies, planets, and stars that we see – still in motion – today.

People call this "the Big Bang," though it's not technically an explosion.

"For an explosion to occur, it requires per-existing space and the material will be distributed or scattered in that space. For example, a star explodes and distributes material in the space," Nabin Rijal, a PhD student in nuclear astrophysics Florida State University, wrote in an email to Business Insider.

"The Big Bang is very different than that. It is the expansion of space itself. Materials (elementary particles-antiparticles) are created in the process of expansion. […] So, calling it an explosion would be wrong." 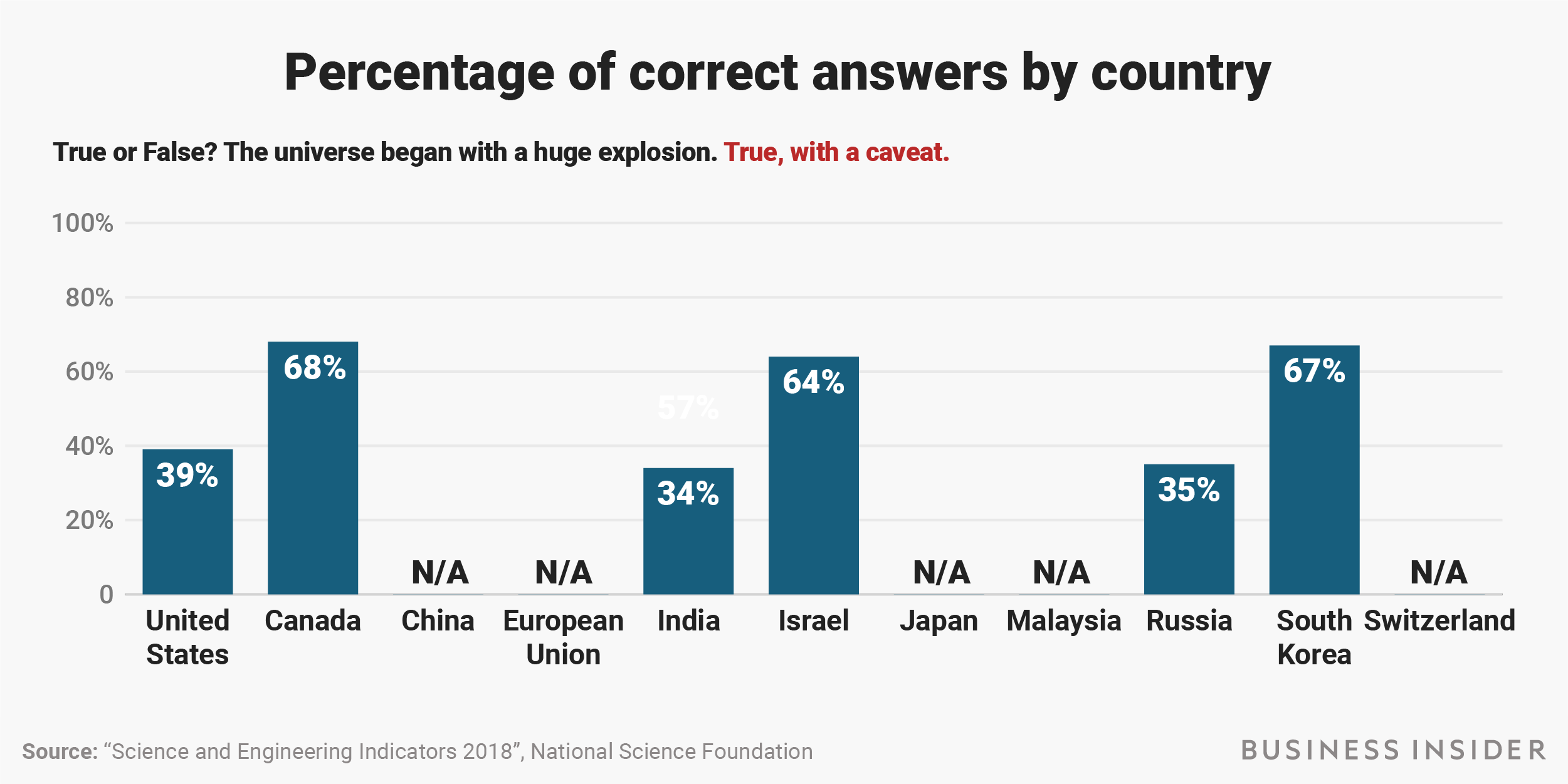 True or False? It is the father's gene that decides whether the baby is a boy or girl.

Whichever sperm makes it to the egg first to join an X chromosome in the mother's egg determines the baby's sex.

(XX is a girl and XY is a boy, anatomically speaking.)

True or False? Antibiotics kill viruses as well as bacteria.

True or False? Human beings, as we know them today, developed from earlier species of animals.

True. Fossils in the ground, genetic studies, and other research over the past century has shown again and again that evolution not only gave rise to species like humans, but will continue to shape the forms of our descendants.

Here's how all 11 nations performed across all of the science questions: 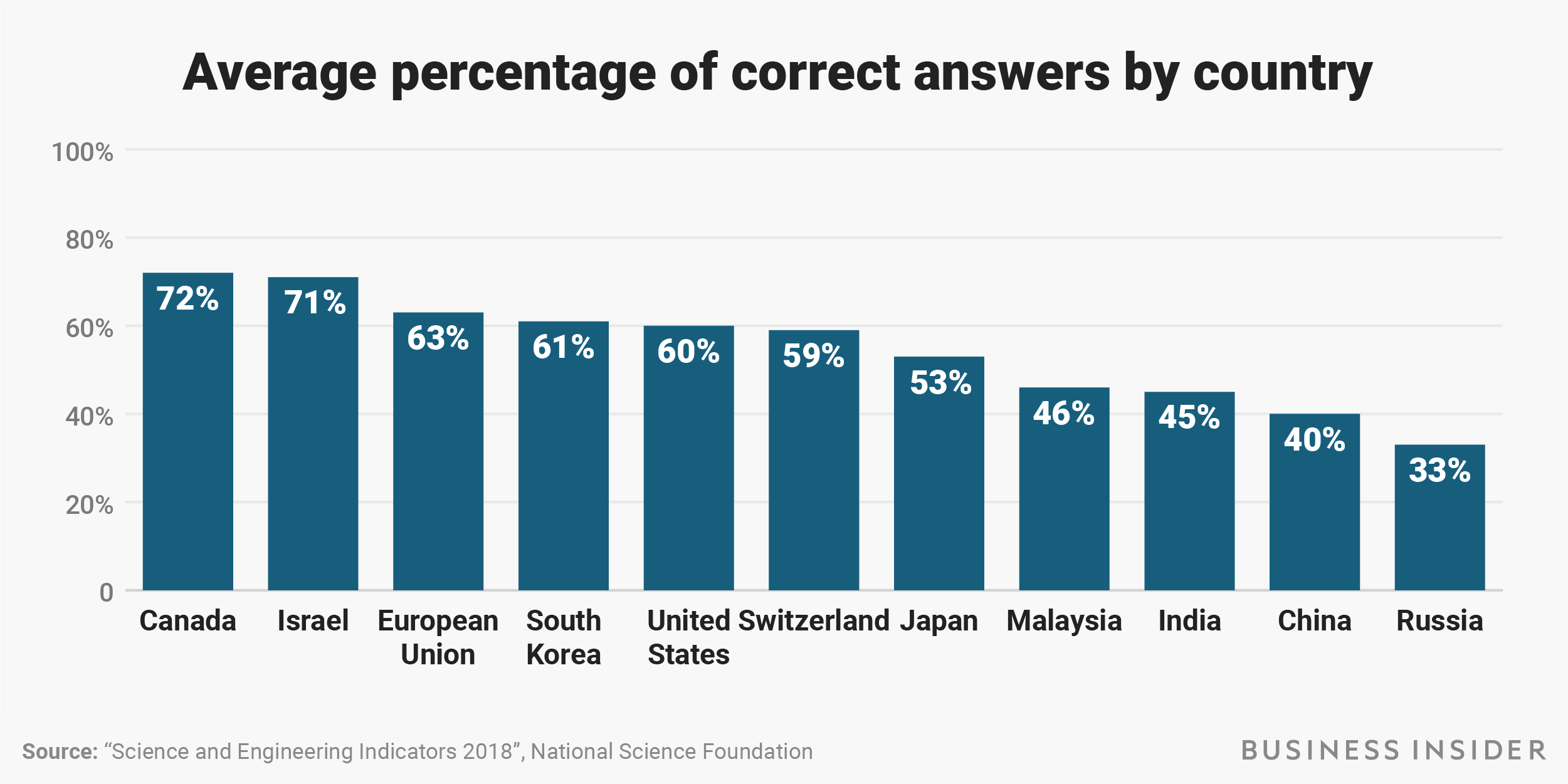 Countries that didn't ask certain questions or report data on them (i.e. "N/A") had those items excluded from their overall average, shown here.

From best to worst, the ranking for 2017 is: Canada, Israel, the EU, South Korea, the US, Switzerland, Japan, Malaysia, India, China, and Russia.

The US effectively got a D- average while the top country, Canada, got a C-.