For our electronic way of life, the Sun is a formidable foe, and the White House is taking protective action against it. On October 29, the White House's National Science and Technology Council released its strategic plan to prepare for an extreme space weather event that could destroy satellites, spacecraft, and vital telecommunications systems.

Many of these electrical systems depend on each other, which is a recipe for disaster. "These critical infrastructures make up a diverse, complex, interdependent system of systems in which a failure of one could cascade to another," the Council reported in the plan.

A $US2 trillion gamble

Every second, the Sun shoots bursts of charged subatomic particles, in the form of solar wind, into space at speeds of 1 million miles per hour.

Typically, the solar wind is weak enough that Earth's magnetic field deflects most of it, like in the NASA illustration below: 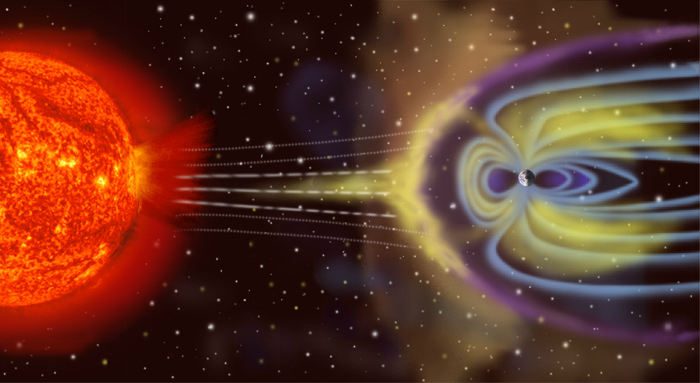 However, if an especially powerful barrage heads our way, it could easily penetrate our magnetic field, fry our electric power systems, and kick us back into the dark ages – all within a matter of hours.

Canada got a minor taste of this back in 1989 when a powerful surge caused the collapse of the Hydro-Québec's electricity transmission system for nine hours. If the storm had been stronger, it might have wiped out a lot more than just Québec electrical transmission.

Though a doomsday-scenario like this hasn't happened yet, experts estimated in 2008 that a single monster solar surge could cause up to $US2 trillion in economic damage.

That's almost 10 times more than the damage from any single natural disaster in recorded history. And NASA predicts there is a 12 percent chance we'll get hit within the next decade. The White House isn't about to gamble with those odds.

While there's not much we can do to prevent a surge of powerful solar radiation from striking Earth, there are steps that we can take to mitigate the damage. The first step is predicting when one might hit. Right now, the NOAA Space Weather Prediction Centre has 24/7 surveillance on the Sun for this specific purpose.

"You can think of the Sun as kind of like a volcano," Thomas Berger, who is the centre's director, told Business Insider. "It's difficult to predict precisely when it's going to erupt, but you can see the signs building up."

Once an eruption occurs, NOAA can give the proper agencies – including airlines, space satellite operators, and power companies – a 12 to 15 hour warning before it strikes Earth, Berge said.

"That's not as much as we'd like to give, and it would be better if we can give more, but right now that's about the best we can do," Berger said, adding that continued solar research by NASA will almost certainly improve future warning systems.

However, simply knowing that a storm is headed your way isn't enough. You also need to predict how strong it is – and that information doesn't come until much later, Berger explained.

To determine storm intensity, NOAA has what Berger calls a space "tsunami buoy," which is currently floating about 932,000 miles from Earth  directly between our planet and the Sun – at an invisible point in space called L1, shown below: The buoy is called the Advanced Composition Explorer (ACE). When a storm hits ACE, it gives NOAA a better handle on what exactly we're in for:

"ACE relays that information back at the speed of light, so we have about 15 to 60 minutes before the storm hits the Earth after it hits that buoy satellite," Berger said. "And using that we can say … 'OK we know exactly how big this thing is and how bad it's going to be.'"

ACE is now 17 years old and will soon be replaced by the Deep Space Climate Observatory (DSCOVR) satellite, which will serve as America's primary warning system for solar storms.

Rallying help in America and beyond

In their report, the White House calls upon two dozen national departments, agencies, and service branches to reach a number of benchmarks within the next one to two years.

These benchmarks are designed to address actions like "creating engineering standards, developing vulnerability assessments, establishing decision points and thresholds for action, understanding risk, developing more-effective mitigation procedures and practices, and enhancing response and recovery planning," according to the report.

For example, the Department of Homeland Security, in partnership with the Department of Energy, have been given 120 days (from the strategy plan's publication date) to develop an "all-hazard Power Outage Incident Annex" that will include steps to respond and recover from an extreme solar surge, if one strikes.

America isn't the only one taking steps. An extreme solar event could affect the entire globe, which is why the European Space Agency (ESA) is now working with scientists across 14 European countries on developing a warning network, they reported on November 5.

"The development of space-weather precursor services in Europe is a growing success, and also promises commercial opportunities that we could not foresee just a few years ago," said Juha-Pekka Luntama, ESA's space weather manager, in an ESA press release.

All of these efforts are great news because Earth is the only home we've got.