The first wings on Earth might have evolved from the scuttling legs of an ancient, flightless crustacean.

Today, modern crabs, lobster, shrimp, and crayfish are sometimes called the bugs of the sea, and as part of the arthropod family – marked by strong body armour and segmented joints – the name does make some sense.

Scientists currently believe the first insects emerged roughly 480 million years ago, evolving from aquatic forms of crustaceans. As terrestrial ecosystems became more complex, around 80 million years later, wings would allow them to take to the air.

If they're right, that means the earliest insects were buzzing around our planet long before birds, bats, and pterosaurs – so where did they get that ability?

It's a simple question that's been bugging experts for centuries. A century-old hypothesis suggests insect wings are an evolutionary novelty, springing up de novo from random buds of tissue during development.

A more recent view is that they arose from existing structures already present in ancient crustaceans, slowly morphing over time into something more useful out of water.

The gills of these ancient crustaceans are one of the top appendage candidates because they possess both joints and muscles. In some crustacean larvae, they even look like mini wings.

But two new papers on a distant relative of winged insects suggest their legs are a better match.

Knocking out certain genes on the shrimp-like Parhyale hawaiensis, the first study shows a gene network similar to that of the insect wing operates both in the crustacean's body armour and the segment of leg closest to its body. This suggests both have somehow squeezed through the body wall and back out again to form wings.

The second study found something similar. Knocking out certain genes, researchers compared how the six leg segments on a fruit fly and other insects line up with the seven or eight leg segments found on P. hawaiensis.

The authors found their answer in a paper written in 1893. It suggested these proximal 'lobes' on the crustacean's leg had merged into the insect's body wall. Since then, it's been noticed that in many insect embryos, the leg segment nearest to the body actually fuses to the body wall during development.

"But I still didn't have the wing part of the story," explains molecular biologist Heather Bruce from the Woods Hole Oceanographic Institute.

"So I kept reading and reading, and I came across this 1980s theory that not only did insects incorporate their proximal leg region into the body wall, but the little lobes on the leg later moved up onto the back and formed the wings."

Using genomic and embryonic data, Bruce and her colleagues found evidence to support this.

First, they say, the proximal leg lobes become integrated into the body wall. Then, once there, the nearest segment moves "up onto the back, to later form insect wings".

"The complementary leg- and wing-gene perspectives lead these groups to agree on the answers to several key questions about the crustacean–winged insect transformation," write two independent experts in a review of the two studies for Nature Ecology and Evolution.

"They agree that the lateral body wall of insects is homologous to the proximal-most leg segment of Parhyale. They also agree that the wing incorporates body wall components that are derived from crustacean legs."

The studies do not, however, agree on everything. The first study supports what's known as a "dual origin" hypothesis, which contends the most proximal leg segments and body wall both contributed to wing development. Or, as the authors put it, "novelty through a merger of two distinct tissues".

The second paper proposes a more gradual and complex transformation that mainly concerns the leg segments. According to their findings, the two most proximal leg segments first merged into the insect's body wall, and then only the nearest leg segment squeezed out the back to form wings. 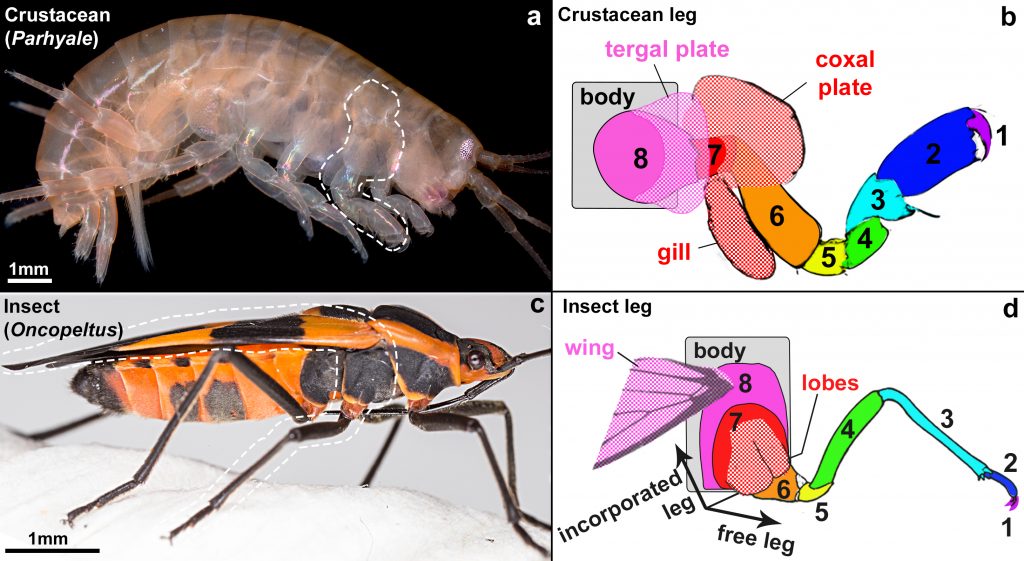 The difference is subtle, and further research is needed to show which – if either – is more correct. But the similarities between the studies provide a compelling solution to the question of which of the earlier theories on insect wing evolution are right.

This gives insect wings the mere appearance of "dual origin", where the body wall and leg blend to form wings, when in fact, the authors say, the insect body wall itself is derived from the most proximal leg segments.

"While wings are an outgrowth of what is now the insect body wall, they owe their origin to the leg segment of an ancestral arthropod," the authors conclude.

It's a neat idea that helps bring together many competing hypotheses, but in all probability, it won't end the mystery. In the past 10 years alone, we have come to learn so much more about insect evolution.

Before genomic research, we didn't even realise crustaceans and insects were so closely related in the arthropod family, which is why many people thought insect wings had sprouted out of nowhere.

The gills, segmented legs, and body armour of crustaceans have now given us direct targets to study.

"People get very excited by the idea that something like insect wings may have been a novel innovation of evolution," Patel says.

"But one of the stories that is emerging from genomic comparisons is that nothing is brand-new; everything came from somewhere. And you can, in fact, figure out from where."

Agreeing on where is another matter.

"Although the origin of insect wings remains mysterious, the research of both groups reveals exciting paths forward toward finally solving this mystery," concludes the Nature review.

The first and second paper were both published in Nature Ecology and Evolution.