Every year, the World Happiness Index surveys numerous people from various countries around the world in search of, as the name implies, which country has the happiest population. This year’s winner is Denmark, followed closely by Switzerland, Iceland, and Norway. The US ranked 13th.

So how do the researchers come up with this list? The process is actually rather simple, as the Index's website explains: "The rankings are based on answers to the main life evaluation question asked in the poll. This is called the Cantril ladder: it asks respondents to think of a ladder, with the best possible life for them being a 10, and the worst possible life being a 0. They are then asked to rate their own current lives on that 0 to 10 scale."

In short, the researchers straight-up asked people to rank their own happiness. These answers are then weighted based on six other factors: levels of GDP, life expectancy, generosity, social support, freedom, and corruption.

Then, the results are compared to Dystopia, an imaginary place the team created where everyone is miserable. This fictional, sad realm allows all of the countries to remain positive in the six factors listed above. In other words, Dystopia is a benchmark that every country passes to make a better graph.

If you're looking for reasons to dismiss your home country's less-than-stellar ranking, one thing this index has going against it is its rather small sample size, which only surveys 2,000 to 3,000 people per country. When you consider population size, that’s not great.

However, according to the team, "a sample size of 2,000 to 3,000 is large enough to give a fairly good estimate at the national level. This is confirmed by the 95 percent confidence intervals shown at the right-hand end of each country bar."

Now that you understand where these rankings come from, let’s take a look at some of the best and worst. 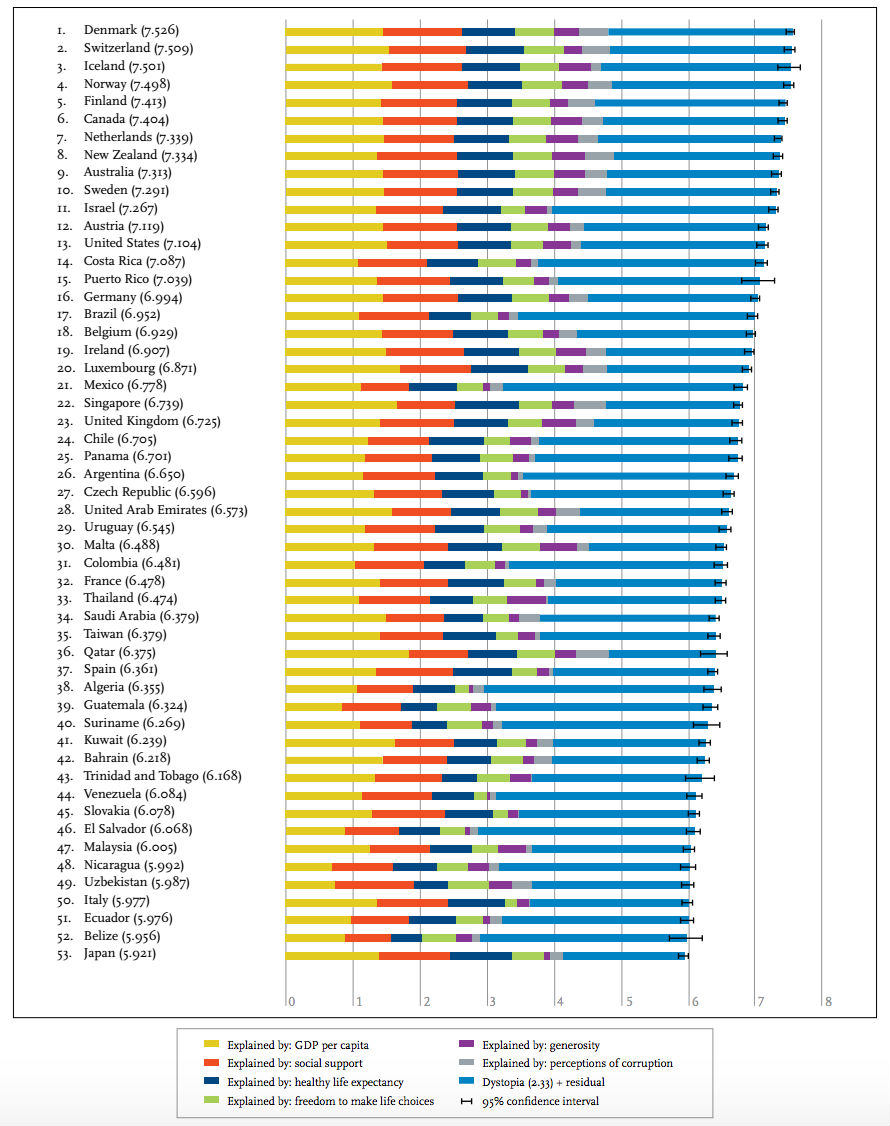 As mentioned, Denmark leads the pack with Switzerland (last year’s winner), Iceland, Norway, Finland, Canada, the Netherlands, New Zealand, Australia, and Sweden rounding out the top 10. The US ranks 13th, Germany 16th, and the UK 23rd, to name a few big players.

The unhappiest countries are Afghanistan at 154th followed by Togo and Syria. Burundi comes in last at 157th.

Besides bragging rights, what do these rankings truly tell us? The team believes the report helps countries gauge how ready they are to start pursuing the UN’s Sustainable Development Goals, which include ending poverty and hunger, increasing healthcare and the quality of education, reaching gender equality and many other great, humanitarian goals that would benefit the world.

The team also believes that the index is helpful because it looks at more than just economic factors, like most other world polls do.

You can download the full report, and browse the entire rankings list on the World Happiness Index’s official site.