The World's Biggest Frogs Are So Chunky, They Shift Rocks to Build Their Own Ponds

The aptly named goliath frog is the biggest species of frog in the world, and scientists now say it's the first African amphibian we know of to engage in 'nest-building' activity – something that may actually be responsible for their gigantic size.

The nests that these frogs build are small, protected ponds for their young offspring, and their construction involves shifting rocks up to 2 kg (4.4 pounds) in weight along the way.

Over generations, that labour could have helped develop the chunky legs and overall size of the frogs, according to researchers.

Goliath frogs are only found in Cameroon and Equatorial Guinea, growing up to 34 cm (a little over 13 inches) in length, and weighing up to 3.3 kg (7.3 pounds). But despite their size, scientists know very little about them.

Now they've shown that they go to quite extraordinary efforts to build ponds that offer their eggs and tadpoles extra protection against the elements and predators – and adult goliath frogs are also willing to act as the security detail for the new hideaways they've constructed.

"Goliath frogs are not only huge, but our discovery shows they seem to be attentive parents as well," says one of the team, Marvin Schäfer from the Berlin Museum of Natural History.

"The little ponds they make at the edges of fast-flowing rivers provide their eggs and tadpoles with a safe haven from sometimes torrential waters, as well as from the many predators living there."

"We think that the heavy work they put into excavation and moving rocks may explain why gigantism evolved in these frogs in the first place."

The team of researchers explored the banks of the Mpoula River in Cameroon for evidence of nesting, finding 22 potential breeding sites, where rocks and other material had been piled up in a way that wouldn't have happened naturally. In 14 of those, they found nearly 3,000 eggs each.

Although nest-building has been in observed in several large frog species outside of Africa before, such as the Bornean Giant River Frog, the majority of frogs that we know of leave their eggs wherever is most convenient in the natural environment. Whether that's on nearby leaves or on the ground.

Based on the differing ages of the goliath frog tadpoles in some of the ponds, it appears the nests get reused, too. 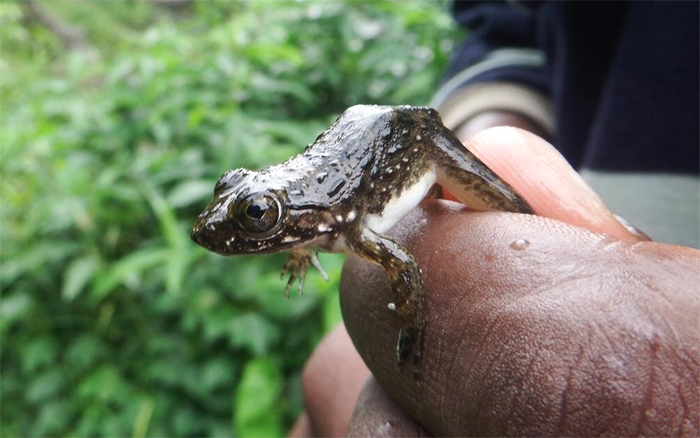 An infrared, time-lapse recording of the site also revealed goliath frogs going about pond protection duties, guarding one of the nests against predators.

Pond digging wasn't actually captured on camera, but the scientists hypothesise the frogs are using their super-strong legs to shift rocks into position, based on the similar size of other frog species known to dig nests.

Interestingly, it wasn't clear which sex was responsible for digging the nests.

The study found that three different types of pond were built: naturally occurring rock pools that the frogs clear of leaves and debris; shallow pools that get lined with material dug out from the centre; and larger depressions cleared of larger stones, which then get moved to the edge of the nest to provide a type of barrier.

The last type proved to be the most effective type of nest, the one that showed most resilience against eggs spilling out or heavy rains causing flooding.

It's an intriguing finding about a strange amphibian we don't actually know that much about, and the researchers hope to continue their study and learn more about this nesting behaviour.

Goliath frogs are under threat, too – their numbers have declined by more than 50 percent in the last decade, as deforestation puts their habitats under threat, and as they have become hunted in greater numbers for food or to keep as pets.

In fact, this current study started out looking for evidence of the eating habits of goliath frog tadpoles, as conservationists look to try and protect their existence for the future.

"The fact that we've only just discovered these behaviours shows how little we know about even some of the most spectacular creatures on our planet," says the leader of the project, Mark-Oliver Rödel.

"We hope that our findings, combined with further ongoing research, will improve our understanding of the needs of the goliath frog so we can help support its continued survival."

The research has been published in the Journal of Natural History.