Mysterious X-37B Space Plane Is Returning to Orbit, And For Once We're Being Told Why

The US military's X-37B space plane is heading back into space in mid-May, and while the Air Force doesn't often say much about the mysterious aircraft, the service's top civilian outlined what it will be doing this time around.

"The Air Force's Rapid Capability Office has combined forces with the Air Force Reserve Research Lab and now the US Space Force to execute a mission that maximises the X-37B's unique capabilities," Air Force Secretary Barbara Barrett said during a webcast hosted by the Space Foundation on Wednesday.

"This important mission will host more experiments than any prior X-37B flight, including two NASA experiments," Barrett added.

"One is a sample plate evaluating the reaction of select significant materials to the conditions in space. The second studies the effect of ambient space radiation on seeds. A third experiment, designed by the Naval Research Laboratory, transforms solar power into radio frequency microwave energy, then studies transmitting that energy to Earth."

The sample plate and seeds experiments are for NASA, the Air Force said in a statement Wednesday, adding that the mission will deploy the FalconSat-8, a small satellite developed by the US Air Force Academy and sponsored by the Air Force Research Laboratory, in order to conduct several experiments while in orbit.

The space craft, known as the Orbital Test Vehicle, will launch from Cape Canaveral on May 16, Barrett said, adding that the Space Force was dedicating this flight to "first responders and front-line professionals".

While the Air Force owns the X-37B, the recently established Space Force, the military's sixth branch, is responsible for its launch, operations in orbit, and landing.

The X-37B team exemplifies the "lean, agile and forward-leaning technology development" the US needs in space, Gen. Jay Raymond, the chief of Space Force operations, said in the statement, adding that each launch is a "significant milestone" in "how we build, test, and deploy space capabilities in a rapid and responsive manner."

'We know that that drives them nuts'

The X-37B program started in 1999 and first launched in 2010. It's completed five missions, spending 2,865 days in orbit, including a record 780 days on its most recent mission, which ended in October.

The Air Force said Wednesday that this would be the first X-37B mission to use a service module for experiments. Attached to the rear of the vehicle, the service module allows extra experimental payload to be carried to orbit.

"The ability to test new systems in space and return them to Earth is unique to the X-37B program and enables the US to more efficiently and effectively develop space capabilities necessary to maintain superiority in the space domain," the Air Force said in the statement Wednesday. 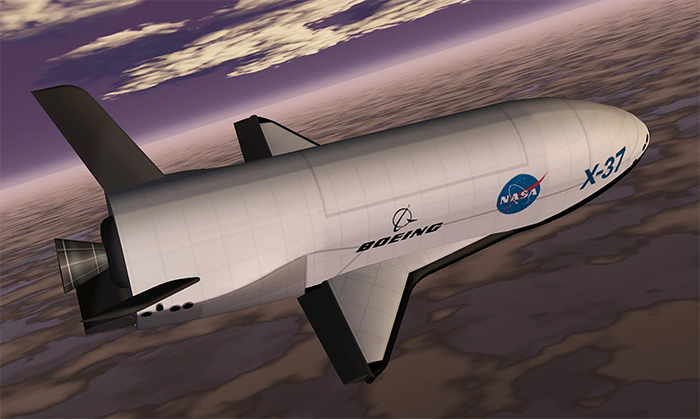 Artist's depiction of an X-37 space plane in flight. (Boeing)

Despite the X-37B's prolific work in space, the Air Force doesn't often elaborate on what the space craft is doing up there.

The classified nature of its missions have given rise to suggestions the X-37B is involved in testing military space technology related to reconnaissance satellites.

It's been spotted at relatively low altitudes – less than 200 miles, according to some, lower than the International Space Station – which experts have said may mean the US is looking at moving spy satellites to lower orbits, where they could take sharper photos but would need more fuel to manoeuvre.

Barrett's predecessor, Heather Wilson, last year called the X-37B "fascinating" because "when it's close to the Earth, it's close enough to the atmosphere to turn where it is".

That means "adversaries don't know … where it's going to come up next. And we know that that drives them nuts. And I'm really glad about that," Wilson said, according to Military.com.

Air Force officials have also suggested that the X-37B could in the future share information with the service's fifth-generation fighters, the F-22 and F-35, giving them "the ability to operate from all domains".