What's The Maximum Number of Habitable Worlds Around a Star? Here's The Science

In recent decades, over 4,000 extrasolar planets have been confirmed beyond our Solar System. With so many planets available for study, astronomers have learned a great deal about the types of planets that exist out there and what kind of conditions are prevalent.

For instance, they have been able to get a better idea of just how common habitable planets are (at least by our standards).

As it turns out, a surprisingly high number of planets out there could support life. That is the conclusion reached by a team of astronomers and planetary scientists who conducted a study of the possible sizes of habitable zones (HZ) based on stellar classification.

After considering many planets could stably orbit within them, they came to the conclusion that stars with no Jupiter-sized gas giants can have as many as seven habitable planets! 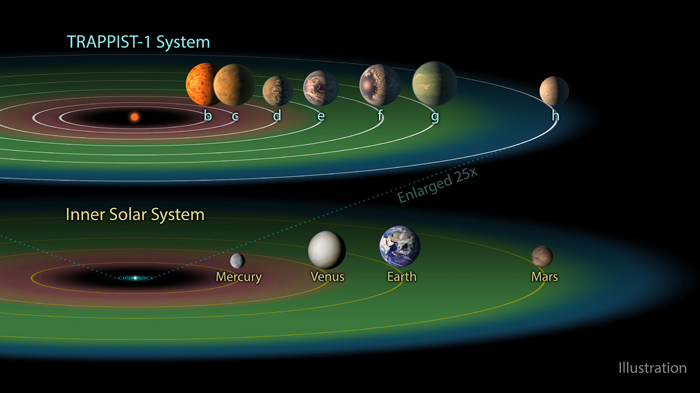 Three of the TRAPPIST-1 planets dwell in their star's "habitable zone". (Credit: NASA/JPL)

The study was inspired by Kane's own research of the TRAPPIST-1 star system, a nearby M-type (red dwarf) with no less than seven rocky planets (three of which orbit within the star's HZ).

This discovery, combined with the many rocky planets discovered around nearby red dwarf stars in recent years, has led astronomers to ponder just how many potentially-habitable planets a star can host.

"This made me wonder about the maximum number of habitable planets it's possible for a star to have, and why our star only has one," Kane explained in a UC Riverside News story. "It didn't seem fair!"

For the sake of their study, Kane and his colleagues created a model system in which they accounted for stars of various spectral classifications and planets of various sizes and orbits.

Stellar classifications were a key consideration, since larger, brighter, and hotter (aka. "early-type") stars are known to have wider HZs, whereas smaller and cooler stars (like our Sun and red dwarfs) have much narrower ones.

Their model also incorporated an algorithm that accounted for the gravitational forces involved, which helped test how planets would affect each other's orbits over the course of millions of years.

What they found was that "early-type" stars – O- or B-, and possibly A-type – are more likely to have multiple planets orbiting within their wider HZs than "late-type" stars – such as G-, K-, and M-type.

In fact, they found that it is possible for some stars to support as many as seven rocky planets within their HZs, and that a star like our Sun could potentially support six planets with liquid water.

A significant factor here is that the planets have more circular orbits rather than elliptical or irregular ones, which allows for more stable orbits by minimizing the chances of close encounters or collisions.

Another requirement, as Kane explained, is that the stars not have a massive planet like Jupiter in orbit around it:

"More than seven, and the planets become too close to each other and destabilize each other's orbits. [Jupiter] has a big effect on the habitability of our Solar System because it's massive and disturbs other orbits."

So far, astronomers have only identified a handful of stars that have multiple planets in their HZs.

One star of interest to researchers is Beta Canum Venaticorum (Beta CVn), which Kane and his colleagues identified and used as an example for their study.

Located 27.5 light-years away, this G-type (Sun-like) star is considered one of the best candidates for finding extraterrestrial life.

To date, no exoplanets have been detected around Beta CVn, but Kane and his colleagues see this as a good indication that the star has no Jupiter-sized planets in orbit around it.

Such large planets orbiting farther from the star would be relatively easy to detect as they made transits (Transit Method), through Direct Imaging, or by their gravitational influence on the star (the Radial Velocity Method).

This makes it a good place for follow-up investigations to look for multiple planets orbiting within the stars HZ. Looking ahead, Kane and his colleagues also hope to search for additional stars surrounded entirely by smaller planets.

These searches will be aided by the deployment of next-generation space telescopes, as well as ground-based observatories that will be gathering their first light in the coming years.

With the improved optics and sensitivity that these observatories have to offer, future studies will also benefit from the creation of new atmospheric models for exoplanet chemistry.

This will result from observatories being able to gather spectra directly from light reflected from these planet's atmospheres, which will reveal their chemical composition and allow scientists to tease out any possible biosignatures.

As Kane said, this research will not help us to determine if there is life out there to study, but also to understand how Earth came to be habitable and how it might change down the road:

"Although we know Earth has been habitable for most of its history, many questions remain regarding how these favorable conditions evolved with time, and the specific drivers behind those changes. By measuring the properties of exoplanets whose evolutionary pathways may be similar to our own, we gain a preview into the past and future of this planet – and what we must do to main its habitability."

The study is also encouraging in that it demonstrates that systems like our own, with only one habitable planet orbiting our Sun, might actually be atypical. Similar to studies that have suggested that there might be a class of "super-habitable" planets, there might also be super-habitable systems.

Not only would this make life easier to find, it increases the likelihood of advanced life and intelligence significantly!

The study, titled "Dynamical Packing in the Habitable Zone: The Case of Beta CVn," appeared in the July 27th issue of The Astrophysical Journal.