Physicists Just Broke The Record For World's Thinnest Magnet, And It's Wild

A slice of material just a single atom thick is breaking records.

The ultra-thin wafer is a magnet that operates at room temperature, opening up avenues for the development of technology, particularly memory devices, and for research into ferromagnetism and quantum physics.

It's a huge step up from previous attempts to make a 2D magnet, which have lost their magnetism and stability when removed from ultracold conditions.

"We're the first to make a room-temperature 2D magnet that is chemically stable under ambient conditions," said materials scientist Jie Yao of the University of California Berkeley.

This amazing achievement was made using a material called cobalt-doped van der Waals zinc-oxide. As the name suggests, it's created by combining graphene oxide, zinc, and cobalt. Graphene oxide is immersed in acetate dihydrates of zinc and cobalt, the ratios of which are carefully measured.

When baked in a vacuum, this mixture slowly cools into a single layer of zinc oxide interspersed with cobalt atoms, sandwiched between layers of graphene. A step of baking in air burns off the graphene, leaving the single layer of cobalt-doped zinc oxide. 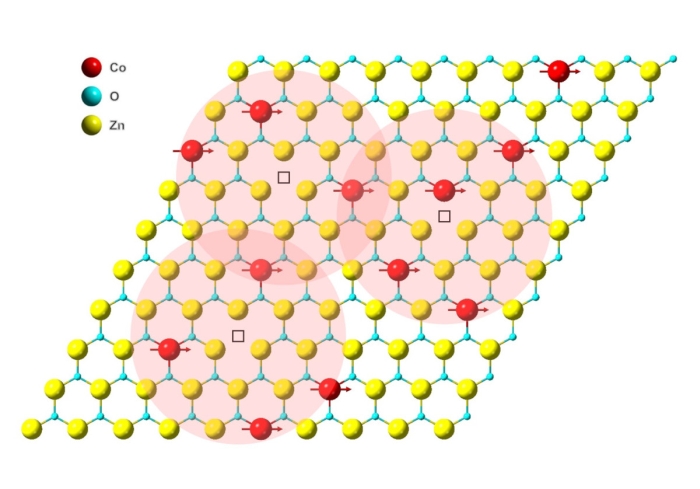 Illustration of magnetic coupling in the material. (Berkeley Lab)

The resulting 2D film was found to be magnetic, but exactly how magnetic depended on the amount of cobalt scattered among the zinc oxide. At around 5 to 6 percent, the magnetism was fairly weak. Doubled to about 12 percent, the material became quite strongly magnetic.

At 15 percent, the material was so strongly magnetic that localized spins within the material started to compete with each other, a condition known as frustration. This can stymie magnetic order within a system, so it seems somewhere around 12 percent is the cobalt sweet spot.

Interestingly, the film remained magnetic and chemically stable not just at room temperature, but up to temperatures of around 100 degrees Celsius (212 degrees Fahrenheit) - even though zinc oxide is not a ferromagnetic material.

"Our 2D magnetic system shows a distinct mechanism compared to previous 2D magnets," said materials scientist and first author of the study, Rui Chen of UC Berkeley. "And we think this unique mechanism is due to the free electrons in zinc oxide."

Free electrons are those not attached to the nucleus of an atom. The researchers believe that the free electrons in zinc oxide could be working as intermediaries that keep the magnetic cobalt atoms in the film oriented in the same direction, even under high temperatures.

It's certainly something that warrants further investigation, especially since it could open so many new avenues for the development of technology and research. The film itself is flexible, and its manufacture scalable, which means the possibilities are dazzling.

One avenue is studying the magnetic interactions between atoms, which has implications for quantum physics. Another is spintronics, the study of the spin of electrons. It could be used to manufacture lightweight and flexible memory devices, too, which rely on switching the orientation of the magnetic field to encode binary data.

Future analysis and calculations will help better understand the limitations of the material.

"Our results are even better than what we expected, which is really exciting. Most of the time in science, experiments can be very challenging," Yao said. "But when you finally realize something new, it's always very fulfilling."