Ancient 'Ghost Footprints' in Utah Are The Find of a Lifetime, Researchers Say

Archaeologists recently stumbled upon a set of mysterious 'ghost footprints' in the salt flats of a Utah desert.

These unusual ancient tracks get their eerie name not because they are from an ethereal realm, but due to their earthly composition: They become visible only after it rains and the footprints fill with moisture and become darker in color, before disappearing again after they dry out in the sun.

Researchers accidentally discovered the unusual impressions in early July as they drove to another nearby archaeological site at Hill Air Force Base in Utah's Great Salt Lake Desert.

The team initially only found a handful of footprints, but a thorough sweep of the surrounding area using ground-penetrating radar (GPR) revealed at least 88 individual footprints belonging to a range of adults and children, potentially as young as 5 years old.

(The GPR technique works by firing radio waves into the ground that bounce off objects that are hidden under the surface.)

The ghostly prints were left by bare human feet at least 10,000 years ago when the area was still a vast wetland. However, researchers suspect that the tracks could date back as far as 12,000 years ago during the final stretch of the last ice age during the Pleistocene epoch (2.6 million to 11,700 years ago). 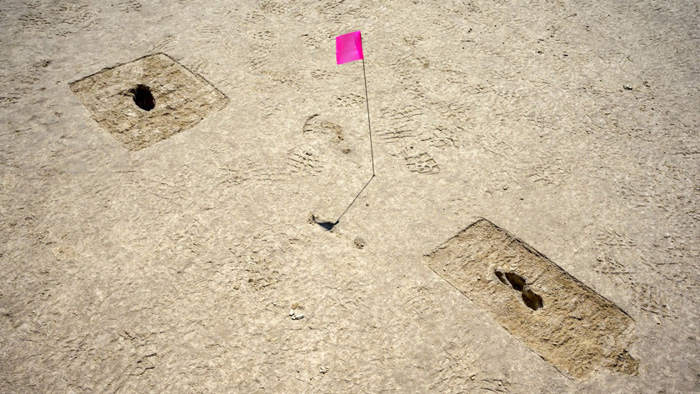 The discovery of so many ancient footprints is a "once-in-a-lifetime discovery," Anya Kitterman, the cultural resource manager at Hill Air Force Base who oversaw the archaeological work, said in a statement. "We found so much more than we bargained for."

However, the discovery has not yet been published in a peer-reviewed journal because researchers are still analyzing the footprints.

The Great Salt Lake Desert was once covered by a large, salty lake similar to the nearby Great Salt Lake – the largest saltwater lake in the Western Hemisphere – which the desert is named after.

The ancient lake slowly dried up due to changes in Earth's climate triggered by the end of the last ice age, which left behind the salts that were once dissolved in the water.

But during the transition from lake to dry salt flats, the area was briefly a large wetland that was occupied by humans up until 10,000 years ago, according to the statement.

During this time, the conditions would have been perfect to create the ghost footprints, the researchers said.

People appear to have been walking in shallow water, with the sand rapidly infilling their print behind them, much as you might experience on a beach," lead researcher Daron Duke, an archaeologist with Far Western Anthropological Research Group, a private firm that specializes in cultural resources management, said in the statement.

"But under the sand was a layer of mud that kept the print intact after infilling." 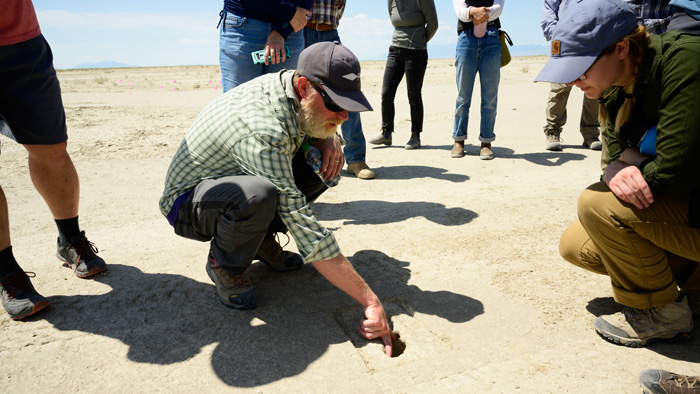 The footprints have since been filled in with salt as the wetlands dried out, making them indistinguishable from the surrounding landscape when they're dry, Duke added.

Normally, when it rains, the water is quickly absorbed deep into the surrounding sediment, which means the ground quickly returns to its normal color. But when the rain falls on top of the hidden muddy footprints, the water gets trapped, creating patches of dark and wet sediment that stand out from their surroundings.

Less than a mile (1.6 kilometers) away from where the tracks were uncovered, a previous research group uncovered a hunter-gatherer camp dating to 12,000 years ago, where the humans who left the prints might have lived.

Archaeological finds at the site included an ancient fireplace, stone tools used for cooking, a pile of more than 2,000 animal bones, and charred tobacco seeds, which are the earliest evidence of tobacco use in humans.

The researchers involved with the new finding have collected some of the footprints in order to determine their exact age. Using radiocarbon dating, researchers hope to be able to analyze small pieces of organic material that could have been trapped in the sediment by the foot of whoever left the prints, according to the statement.

This region is a hotspot for ancient human trackways. In September 2021, a study revealed that 60 human footprints in White Sands National Park in New Mexico dated to between 21,000 and 23,000 years ago, making them the oldest "unequivocal evidence" of humans in the Americas. These footprints were also discovered using GPR.

"We have long wondered whether other sites like White Sands were out there and whether GPR would be effective for imaging footprints at other locations," Thomas Urban, an archaeologist at Cornell University who developed the GPR survey technique used at White Sands and more recently at the Hill Air Force Base, said in a statement.

"The answer to both questions is yes."

The researchers say that these types of discoveries are important because they are direct evidence of human settlement in the area and are much more visceral than other nearby archaeological discoveries.

"There is an immediate human connection to seeing human footprints," Duke said. "To see them from a distant past, especially so much different than it looks today, can be impactful."