Scientists had nicknamed it "The Thing" – a mysterious football-sized fossil discovered in Antarctica that sat in a Chilean museum awaiting someone who could work out just what it was.

Now, analysis has revealed that the mystery fossil is in fact a soft-shelled egg, the largest ever found, laid some 68 million years ago, possibly by a type of extinct sea snake or lizard.

The revelation ends nearly a decade of speculation about the fossil, and could change thinking about the lives of marine creatures in this era, said Lucas Legendre, lead author of a paper detailing the findings, published Wednesday in the journal Nature.

"It is very rare to find fossil soft-shelled eggs that are that well-preserved," Legendre, a post-doctoral fellow at the University of Texas at Austin, told AFP.

"This new egg is by far the largest soft-shelled egg ever discovered. We did not know that these eggs could reach such an enormous size, and since we hypothesise it was laid by a giant marine reptile, it might also be a unique glimpse into the reproductive strategy of these animals," he said.

Above: The egg's soft shell shown in dark grey, and surrounding sediment as light grey.

The fossil was discovered in 2011 by a group of Chilean scientists working in Antarctica. It looks a bit like a crumpled baked potato but measures a whopping 11 by seven inches – 28 by 18 centimetres.

For years, visiting scientists examined the fossil in vain, until in 2018 a palaeontologist suggested it might be an egg.

It wasn't the most obvious hypothesis given its size and appearance, and there was no skeleton inside to confirm it.

Analysis of sections of the fossil revealed "a layered structure similar to a soft membrane, and a much thinner hard outer layer, suggesting it was soft-shelled," Legendre said.

"This was also confirmed by chemical analyses, which showed that the eggshell is distinct from the sediment around it, and was originally a living tissue."

But that left other mysteries to unravel, including what animal laid such an enormous egg – only one bigger has been found, produced by the now-extinct elephant bird from Madagascar.

The team believe this egg wasn't from a dinosaur – the types living in Antarctica at the time were mostly too small to have produced such a mammoth egg, and the ones large enough laid spherical, rather than oval-shaped, ones.

Instead they believe it came from a kind of reptile, possibly a group known as mosasaurs, which were common in the region.

Bolstering this theory, the egg was found at a site where skeletons of baby mosasaurs and other marine reptiles called plesiosaurs have been found.

An artist's interpretation of a mosasaur. (Francisco Hueichaleo, 2020)

The paper was published in Nature along a separate study that argues that it wasn't only ancient reptiles that laid soft-shell eggs – dinosaurs did too.

For many years, experts have believed dinosaurs only laid hard-shelled eggs, based on those found in the fossil record.

But Mark Norell, curator of paleontology at the American Museum of Natural History, said the discovery of a group of fossilised embryonic Protoceratops dinosaurs in Mongolia made him revisit the assumption. 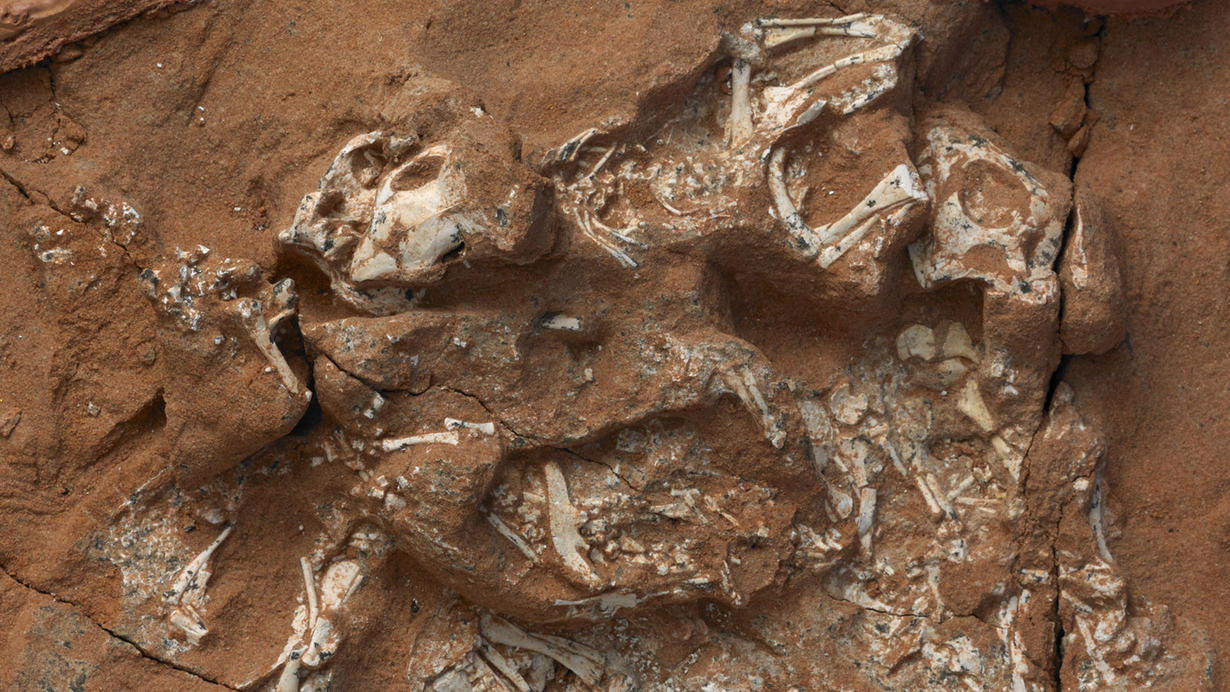 Above: Protoceratops specimen with six embryos, as nearly complete skeletons.

"Why do we only find dinosaur eggs relatively late in the Mesozoic and why only in a couple groups of dinosaurs," he said he asked himself.

"And why have we not found ceratopsian egg shells, since ceratopsian dinosaurs are the most common animals at many sites in Asia and North America, which preserve dinosaur eggs?"

The answer, he theorised, was that early dinosaurs laid soft-shell eggs that were destroyed and not fossilised.

To test the theory, Norell and a team analysed the material around some of the Protoceratops skeletons in the fossil and another fossil of two apparently newborn Mussaurus.

They found chemical signatures showing the dinosaurs would have been surrounded by soft, leathery eggshells.

"The first dinosaur egg was soft-shelled," Norell and his team conclude in the paper.