Thousands of years ago, in what is now the Santa Elena peninsula in Ecuador, a whole bunch of giant sloths met their collective end. Bones, of course, are common in the fossil record, but a lack of sediment separating the skeletons suggested that at least 22 Panamerican ground sloths (Eremotherium laurillardi) all died around the same time.

Although they were found in what is now a tar pit, that may not have been how the sloths met their demise. Palaeontologists from the US and Ecuador have pieced together the available clues, and believe the giant herbivores may have died after their own faeces contaminated their drinking water.

"Multiple lines of evidence suggest that these sloths may have congregated and died in a mass mortality event in a marshy riparian habitat," the team wrote in the newly published study.

"Taking observations from modern megafaunal ecosystems as an analogue, we suggest that this death event could have resulted from drought and/or disease stemming from the contamination of the wallow, paralleling situations observed among hippopotamus populations in watering holes on the present-day African savannah."

The assemblage, found in the Tanque Loma tar seep on Ecuador's southwest coast, dated back to 18,000 to 23,000 years ago, was immediately arresting. Although we know giant sloths thrived for millions of years, dying out around 11,000 years ago, we understand little about their behaviour or social structure.

Previous finds of remains of more than one of the sloths, across multiple generations, suggest that the animals were gregarious. But it wasn't clear whether those animals had lived or died at the same time.

A mass of hundreds of bones - 575 of the 677 bones found in the site belonged to E. laurillardi - was an absolute treasure haul. The team estimated that they belonged to at least 22 individual animals, across a range of ages - 15 adults, one subadult, and six juveniles. Two were small enough that they were probably very young indeed. 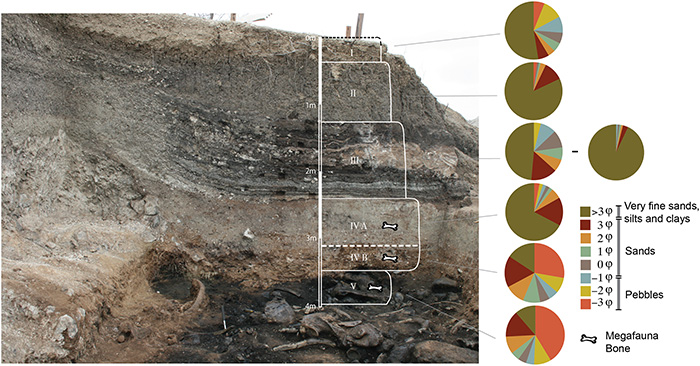 The bones were all found in a single layer, with very little sediment between them, suggesting they died within a very short timespan. This lack of sediment between the bones is also consistent with sticky tar traps, like the La Brea tar pits in Los Angeles, but it would be a mistake to blindly interpret the sloth bones similarly.

Prior to the sloths' deaths, the site was, the sediments suggest, a "low-energy anoxic aquatic environment" - a marshy watering hole.

The sloths had died in a wallow of their own poop.

It's possible, of course, that the water could have also or primarily been contaminated by the asphalt seeping in, rendering it undrinkable.

But there's a present-day parallel that's eerily similar to the sloth graveyard: hippopotamuses in the African savannah.

Hippopotamuses, as we all know, are prodigious poopers. Their waste can change the chemistry of the water they hang out in so much that it sometimes kills off all the fish therein. Sometimes it can even kill the hippos themselves.

"Based on the data from this study, a modern analogue to the Tanque Loma E. laurillardi assemblage may be hippopotami, which congregate in large numbers at water sources where they spend most of their time submerged to protect themselves against heat, sun and insects," the researchers wrote.

"In times of drought, as these water sources begin to dry up, surrounding vegetation disappears and the wallows become increasingly polluted with hippopotamus faecal material, causing significant detrimental impacts on the watershed ecosystem.

"Eventually, most animals succumb to drought-related starvation and/or disease long before the watering hole has completely evaporated."

Terrestrial plant material in the sediment of the sloths' grave - stuff that hadn't been digested - suggested that the waterhole was similarly ephemeral, since it would have had to dry out occasionally for plants to grow there.

So it's possible that the sloths got caught in a similar situation - the body of water shrank, causing the ratio of poop to increase, making the water undrinkable. What a way to go.

It's a shame it wasn't human poop. Apparently sloths love that.

The research has been published in Palaeogeography, Palaeoclimatology, Palaeoecology.