These Are The 12 Largest Nuclear Detonations in History

Since the first nuclear test on 15 July 1945, there have been over 2,051 other nuclear weapons tests around the world.

No other force epitomises the absolute destructive power humanity has unlocked in the way nuclear weapons have. And the weapons rapidly became more powerful in the decades after that first test.

Within 20 years, the US and USSR tested nuclear weapons larger than 10 megatons, or 10 million tons of TNT. For scale, these weapons were at least 500 times as strong as the first atomic bomb. 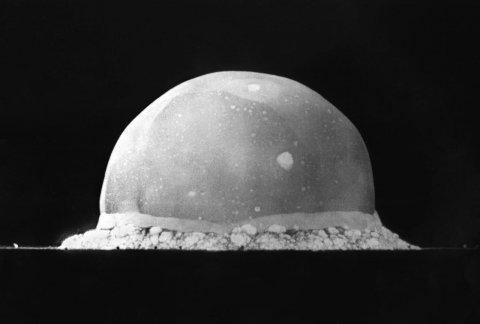 To put the size of history's largest nuclear blasts to scale, we have used Alex Wellerstein's Nukemap, a tool for visualising the terrifying real-world impact of a nuclear explosion.

In the following maps, the first ring of the blast is the fireball, followed by the radiation radius.

In the pink radius, almost all buildings are demolished and fatalities approach 100 percent. In the grey radius, stronger buildings would weather the blast, but injuries are nearly universal.

In the orange radius, people with exposed skin would suffer from third-degree burns, and flammable materials would catch on fire, leading to possible firestorms. 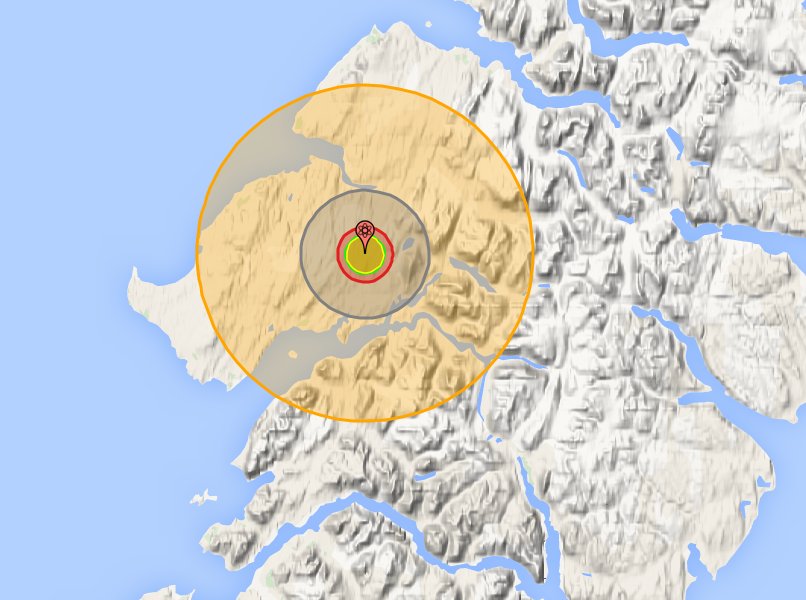 Both tests were held over the Novaya Zemlya region of Russia, an archipelago to the north of Russia near the Arctic Ocean.

No film or photographs of the tests have been released, but both tests included the use of 10-megaton atomic bombs.

These blasts would have incinerated everything within 1.77 square miles of their epicentres while causing third-degree burns up to an area of 1,090 square miles. 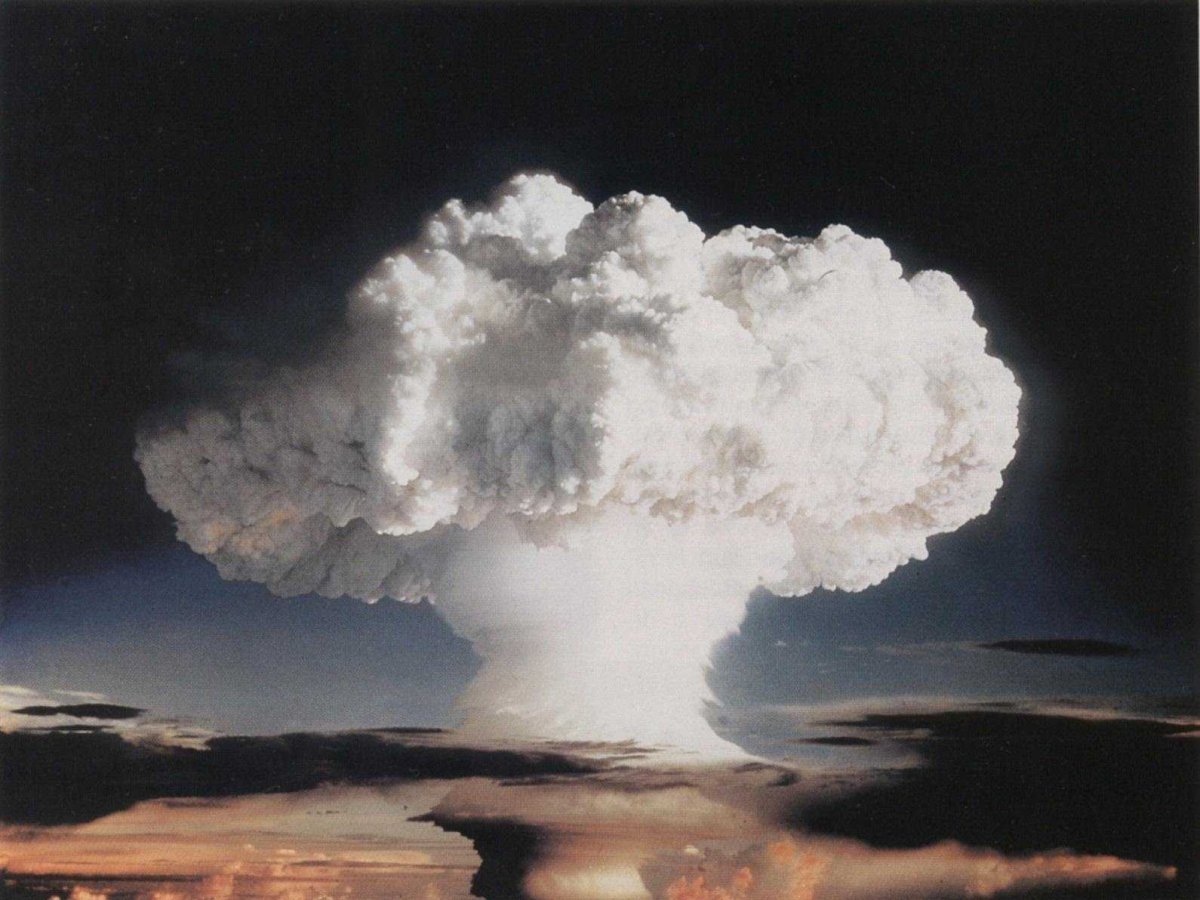 On 1 November 1952, the US tested Ivy Mike over the Marshall Islands. Ivy Mike was the world's first hydrogen bomb and had a yield of 10.4 megatons, making it 700 times as strong as the first atomic bomb.

Ivy Mike's detonation was so powerful that it vaporised the Elugelab Island where it was detonated, leaving in its place a 164-foot-deep crater. The explosion's mushroom cloud traveled 30 miles into the atmosphere. 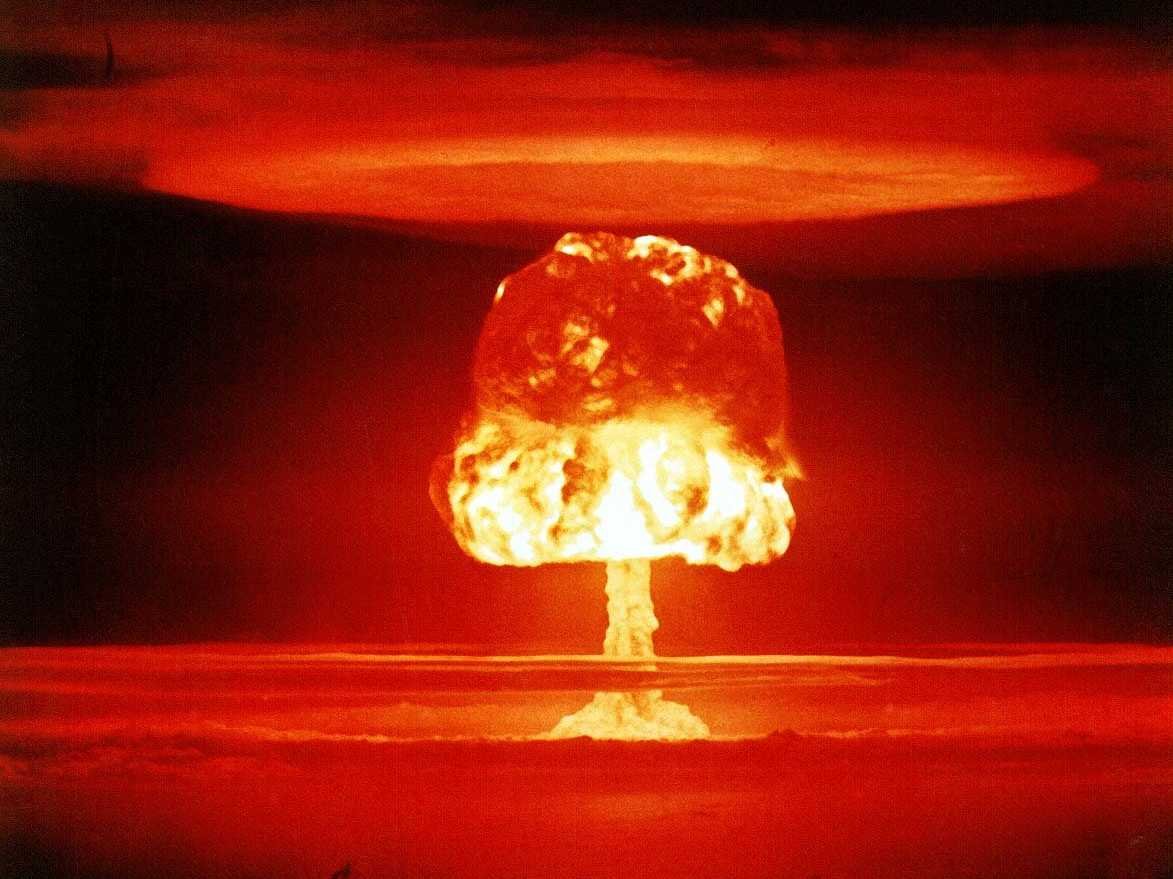 Romeo was the second US nuclear detonation of the Castle Series of tests, which were conducted in 1954.

All of the detonations took place over Bikini Atoll. Castle Romeo was the third-most powerful test of the series and had a yield of 11 megatons.

Romeo was the first device to be tested on a barge over open water instead of on a reef, as the US was quickly running out of islands upon which it could test nuclear weapons.

The blast would have incinerated everything within 1.91 square miles. 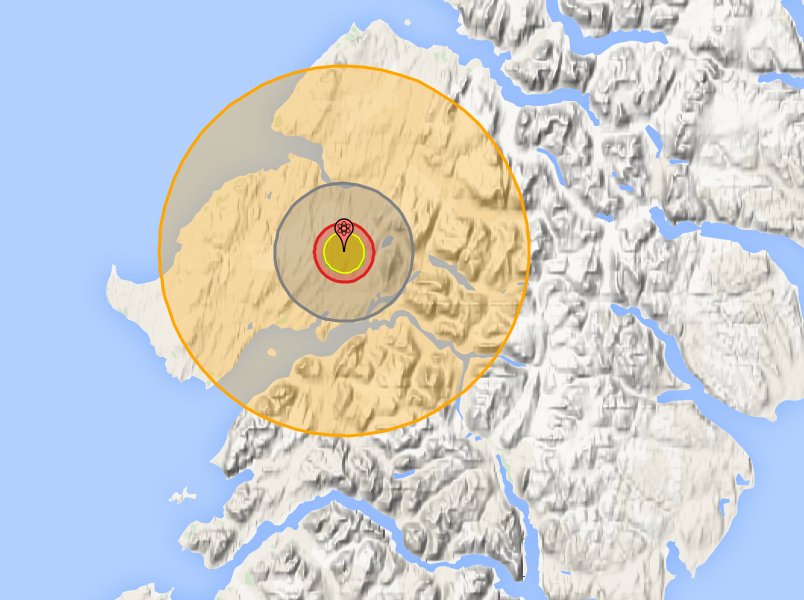 A bomb of this size would incinerate everything within 2.11 square miles while causing third-degree burns in an area of 1,309 square miles.

No footage or photographs of this nuclear test have been released. 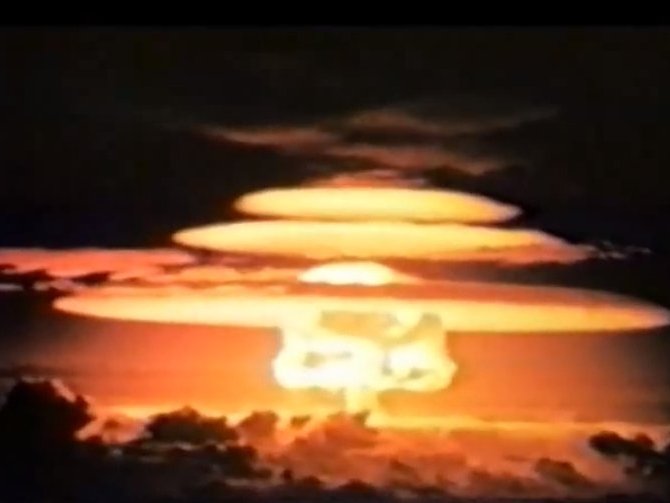 Castle Yankee, the second-strongest of the Castle series tests, was conducted on 4 May 1954. The bomb was 13.5 megatons. 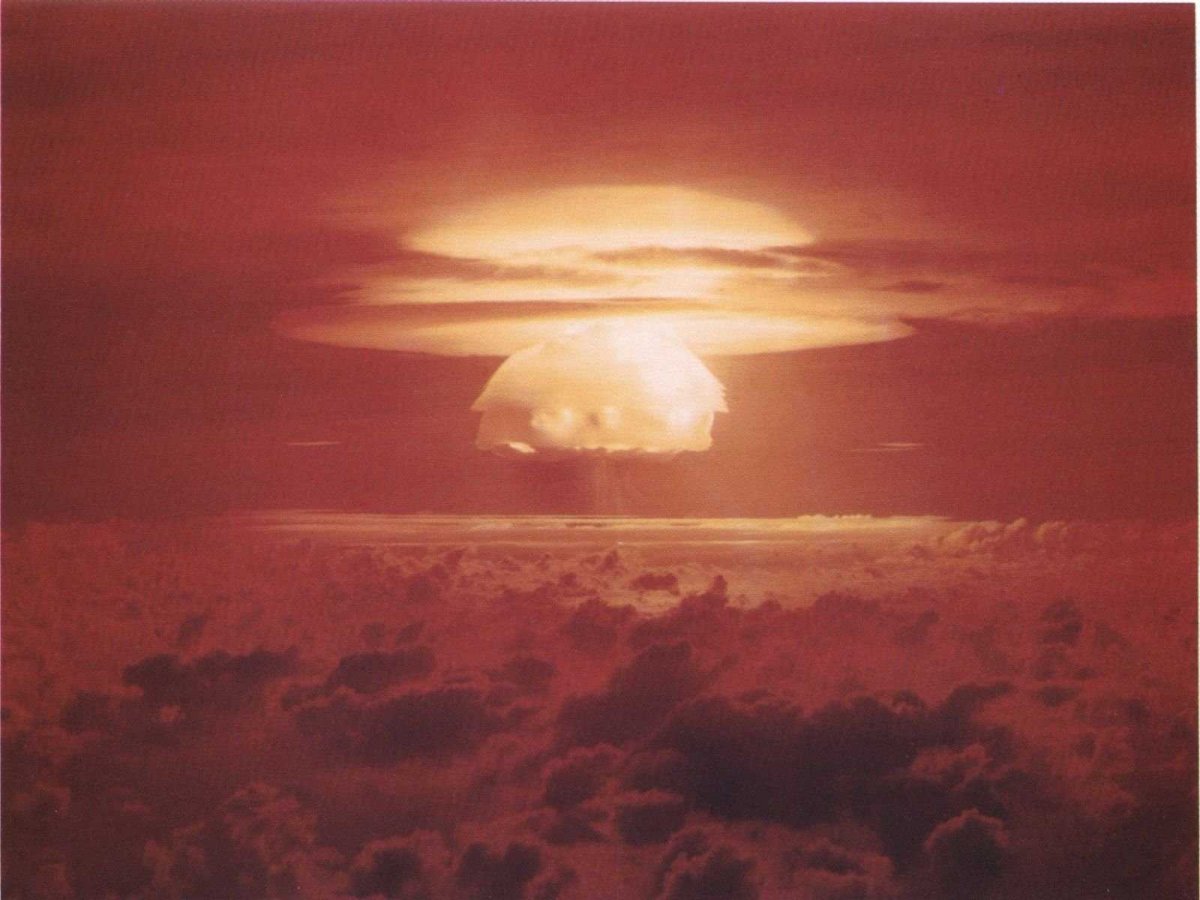 Castle Bravo, detonated on February 28, 1954, was the first of the Castle series of tests and the largest US nuclear blast of all time.

Bravo was anticipated as a 6-megaton explosion. Instead, the bomb produced a 15-megaton fission blast. Its mushroom cloud reached 114,000 feet into the air.

The US military's miscalculation of the test's size resulted in the irradiation of approximately 665 inhabitants of the Marshall Islands and the radiation poisoning death of a Japanese fisherman who was 80 miles away from the detonation site. 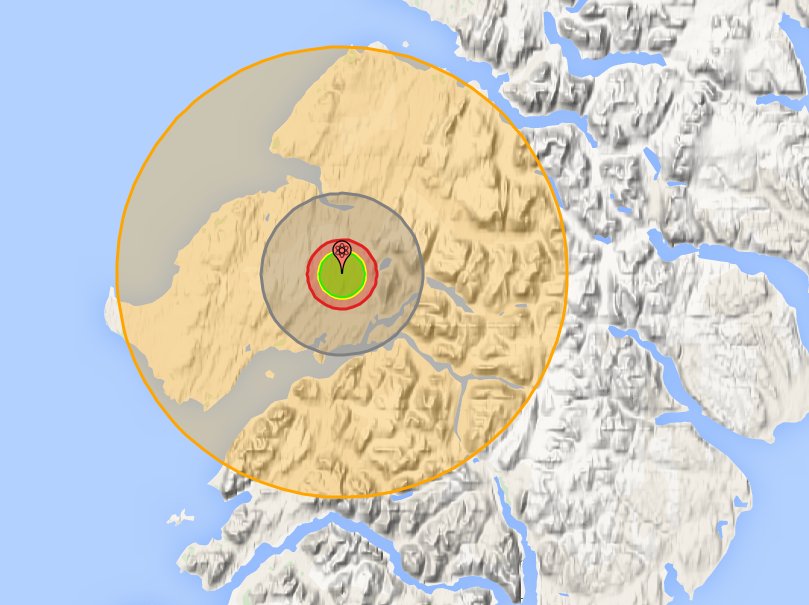 All three produced blasts of about 20 megatons, or about 1,000 times as strong as the Trinity bomb. A bomb of this strength would incinerate everything within 3 square miles.

No footage or photographs of these nuclear tests have been released. 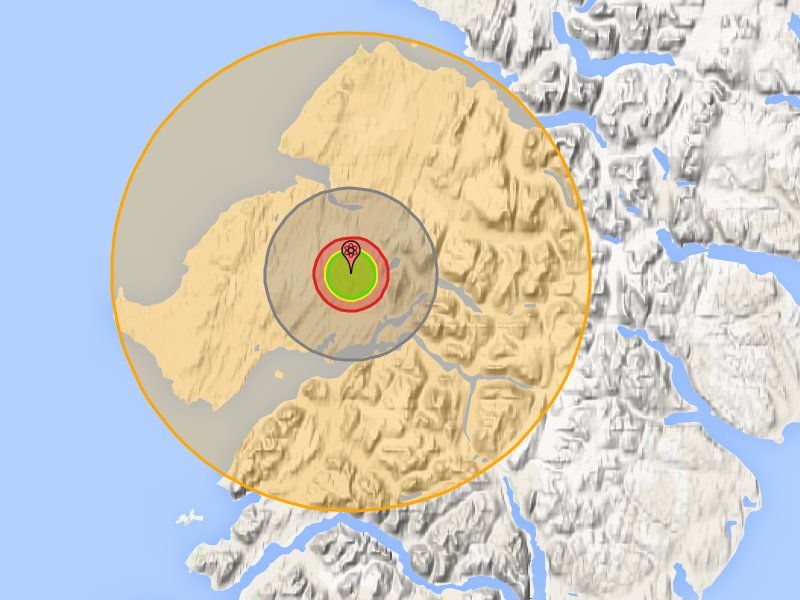 A bomb of this strength would incinerate everything within 3.58 square miles while causing third-degree burns in an area up to 2,250 square miles.

There are no released photos or video of this explosion. 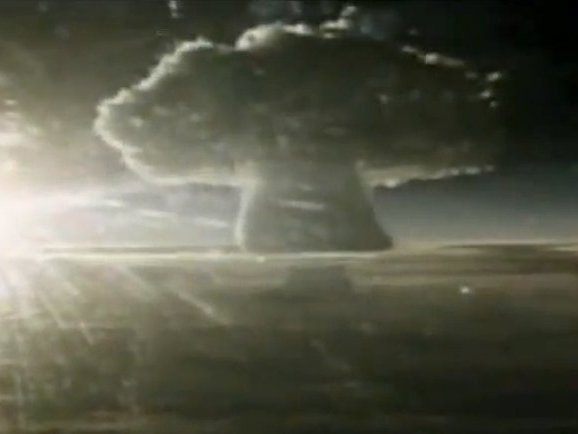 On October 30, 1961, the USSR detonated the largest nuclear weapon ever tested and created the biggest man-made explosion in history.

The blast, 3,000 times as strong as the bomb used on Hiroshima, broke windows 560 miles away, according to Slate.

The flash of light from the blast was visible up to 620 miles away.

The Tsar Bomba, as the test was ultimately known, had a yield between 50 and 58 megatons, twice the size of the second-largest nuclear blast.

A bomb of this size would create a fireball 6.4 square miles large and would be able to give humans third-degree burns within 4,080 square miles of the bomb's epicentre. 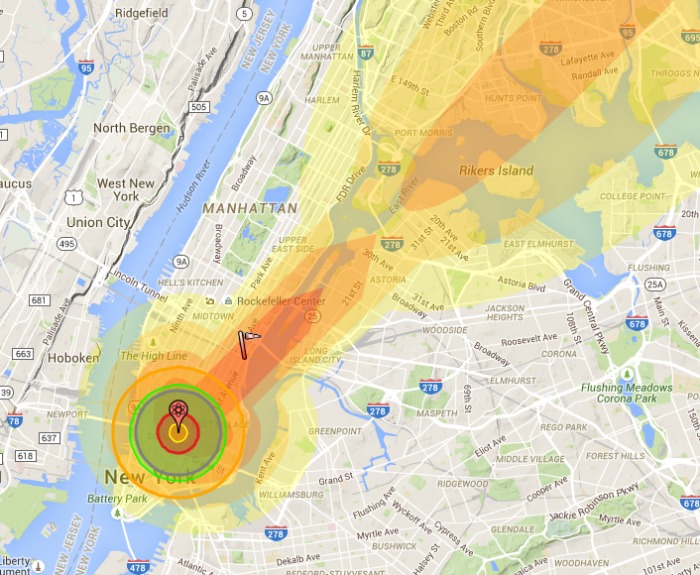 The first atomic blast was a fraction the size of the Tsar Bomba, but it was still an explosion of almost unimaginable size.

According to the NukeMap, a weapon with a 20-kiloton yield produces a fireball with a radius of 260 meters, making its total width the size of 5 football fields.

It would spew deadly radiation over an area 7 miles in width, and would produce third-degree burns in an area over 12 miles in width.

If dropped over lower Manhattan, a bomb of that size would kill over 150,000 people and produce fallout stretching all the way to central Connecticut, according to the NukeMap.

The first atomic bomb was tiny by nuclear weapons standards. But its destructiveness is sill nearly impossible to grasp.

An earlier version of this story was written by Armin Rosen.