Juno Delivers First Images of The North Pole of Ganymede, Where It Rains Plasma

It's been busily orbiting and observing Jupiter and its moons for four years now, but the scientific spacecraft Juno still has some surprises to share. For the first time, it has imaged the north pole of one of the oddest objects in the Solar System, Jupiter's moon Ganymede.

There, the constant rain of plasma from Jupiter's magnetosphere has dramatically altered the moon's icy surface, the new images reveal.

Ganymede is pretty amazing, actually. It's the largest and most massive moon in the entire Solar System. At 5,268 kilometres (3,273 miles) across, it beats out the entire dwarf planet category in size, even clocking in larger than Mercury (but not more massive - Mercury is dense. It's like a planet fruit cake).

Because Ganymede orbits Jupiter inside the planetary magnetic field, the moon's magnetosphere is embedded within it, too. This creates impressively strong plasma waves as plasma particles - primarily electrons - accelerate along the complex magnetic field lines.

This acceleration along magnetic field lines has another effect, too - aurora. Here on Earth, such particles are channelled up to the polar regions, where they interact with atoms high up in the atmosphere to generate stunning light shows.

Ganymede, however, has a negligible atmosphere, so a large proportion of the plasma gets dumped right onto the moon's surface. In newly released infrared images, taken by Juno's Jovian Infrared Auroral Mapper (JIRAM) instrument, the effect of that constant rain of plasma is clear.

"The JIRAM data show the ice at and surrounding Ganymede's north pole has been modified by the precipitation of plasma," said planetary scientist Alessandro Mura, a Juno co-investigator at the National Institute for Astrophysics in Italy.

"It is a phenomenon that we have been able to learn about for the first time with Juno because we are able to see the north pole in its entirety."

The ice at both of Ganymede's poles has a different infrared signature from the ice at the moon's equator. And analysis has revealed that this is because the constant rain of plasma has altered the very structure of the ice crystals.

On Earth - and on most of Ganymede's surface - the molecules in most ice are arranged in a very orderly, hexagonal pattern. But under certain conditions, this neat lattice can fall into structural disarray. This disordered form is called amorphous ice; while it's rare on Earth, it's actually fairly common in space, on dust grains in interstellar clouds, on comets, and on icy bodies.

Three of Jupiter's moons, Europa, Callisto and Ganymede, are icy; and, interestingly, they all have different ice profiles. Callisto's ice is crystalline. Europa's is amorphous. And Ganymede is a strange mix.

Previous research found that this might have something to do with proximity to Jupiter; Europa is the closest, and therefore subject to the highest level of radiation from the radiation belts generated by Jupiter's magnetosphere. Callisto is the farthest, and subject to the least radiation. 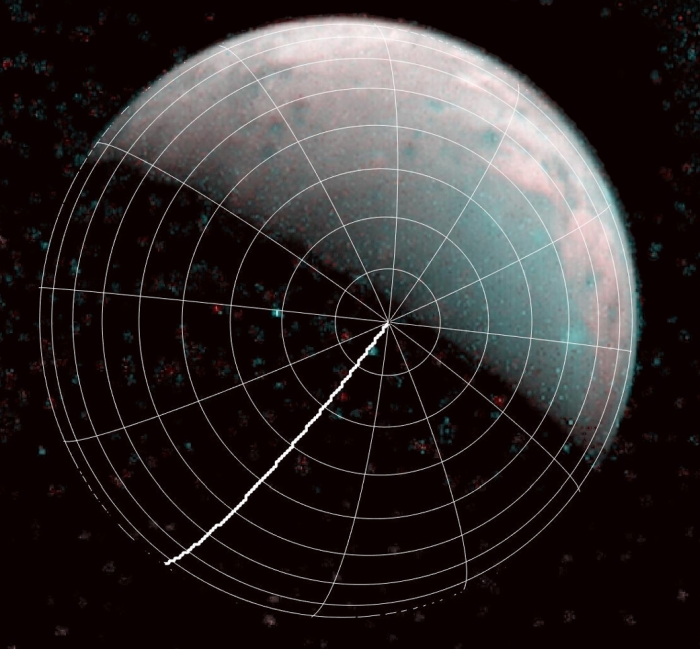 Ganymede is in between, and scientists have previously suggested that its magnetic field would channel radiation to its poles, resulting in a greater concentration of amorphous ice in those locations.

This has now been validated by the Juno data. The JIRAM team believes that the constant bombardment of charged particles onto the polar regions prevents the ice from forming a crystalline structure.

Future observations could reveal more about this fascinating phenomenon. Juno's primary mission is to observe Jupiter, but more dedicated missions are in development. The European Space Agency is planning to launch an orbiter called JUpiter ICy moons Explorer (JUICE) in 2022 to check out not just Ganymede, but Europa and Callisto as well.

These comparative observations should reveal a lot more about Ganymede's ice, and the effect of Jupiter's radiation belts, than just looking at Ganymede alone.