These Are The Strangest, Most Gloriously Alien Images Taken of Mars to Date

We tend to think of Mars as similar to Earth, and in many ways that is true. It's relatively small and rocky. It has an atmosphere and recognisable geological features. We can identify the composition of its rocks, study its weather patterns, and detect seismic activity.

But Mars is also very unlike Earth, too. And this is never clearer than when looking at photographs of the Red Planet taken by its rovers and orbiters. What we take for granted on Earth can turn into breathtakingly alien phenomena just a planet away.

Here are some of our favourite photos that capture the wild strangeness of the planet next door.

A crater full of ice This is the Korolev Crater, not far from Mars' north polar ice cap, as imaged by the European Space Agency's Mars Express orbiter. It's 81.4 kilometres (50.6 miles) across, and is filled with water ice year-round.

When air travels over the ice, it cools and sinks, resulting in a layer of cold air that sits directly above the ice. Since air is a poor conductor of heat, this cold layer acts as an insulator that protects the ice from warmer air, and thus keeps it from melting.

Partial eclipse of the moons

That's not the case on Mars. When one of Mars' moons passes in front of the Sun for a Martian eclipse, it's much smaller. The passage is more correctly termed a transit. NASA's Curiosity rover has observed many such transits from Mars' two moons, Phobos and Deimos, and they are more like shadows flitting across the sky. This one photograph went viral last year for its obvious association with the Star Trek Starfleet logo, but Mars' Hellas Planitia is dotted with hundreds of these chevron-shaped formations. They're actually known as 'ghost dunes', formed by ancient lava flows.

Long ago, when this lava ran freely across the Martian surface, the landscape was rippling with sand dunes. The lava flowed around these dunes, and set in that shape. When the sand blew away in the wind, only the lava remained, wrapped around the impression of dunes that were no longer there. 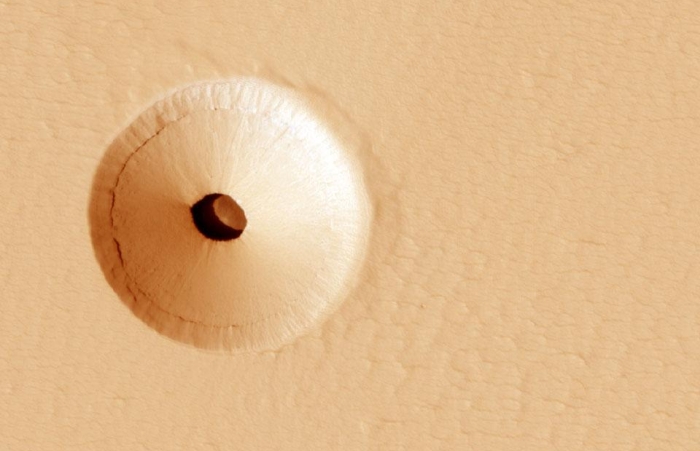 Even on Mars, this feature is peculiar: what seems to be a conical mountain, with a hole in the top… but completely hollowed out. Situated on the side of a giant shield volcano, this is what is known as a lava tube skylight, and it's hollow because sometimes lava flows can solidify on the surface while the flow continues below. Then, the flowing lava can drain away, leaving behind lava tube caves. A section of the surface can then collapse, opening a skylight into the tunnel below.

It's much bigger than any such lava tube found on Earth, and the skylight's conical shape is also extremely weird. How and why it got that way is a mystery. Compared to Earth, Mars is a veritable crater-fest. Its thin atmosphere doesn't afford nearly the protection Earth's does, and a far greater proportion of space rocks rain down on its surface. This spectacular impact occurred sometime between September 2016 and February 2019, and it's like nothing on Earth.

Its colour has been enhanced a little to reveal the impact wave, where the impact has blasted the surface dust away to reveal the dark layer underneath. The crater itself is relatively small, only 15 to 16 metres wide (49 feet to 53 feet), which means the object must have been only about 1.5 metres (5 feet) across, and very dense. Such an object would burn up and disintegrate in Earth's atmosphere before hitting our own planet's surface. We're relatively used to the brownish hue of the Martian sky, as seen in many images captured by Mars rovers. But when the Sun rises and sets on Mars, something strange happens - rather than the familiar flaming red of Earth's sunset, the Martian sky turns a beautiful blue.

When the Sun is overhead, this has the effect of making the sky appear blue, but at sunrise and sunset, when the light has a longer distance to travel across the atmosphere to reach our eyes, only the red wavelengths of light can travel that far, making the sky appear yellow, orange, and red.

On Mars, the atmosphere is filled with particles of dust. These are fine, but much larger than gas particles, and they scatter the red wavelengths, rather than the blue. As a consequence, the sky's colours are reversed. This incredible image shows the complex terrain of the Juventae Chasma, a weathered 250-kilometre-long (155-mile) box canyon carved into the surface of Mars.

In it, you can see distinct craters, but a lot of other interesting features as well, including what could be inverted stream channels - left behind when the area around low-lying ground erodes away, so that the channel is now higher.

There are also holes and divots that reveal distinct layers, as you might find in sedimentary rock on Earth, revealed by wind erosion. We're not sure what process created the layers on Mars, but they are quite common on Mars across a variety of terrain types. It's been a long time since it has rained on Mars… and, ironically, that's why so many of these raindrop-shaped dunes dot the Copernicus Crater. They're rich in a mineral called olivine, a magnesium iron silicate found in igneous rock, and the most common mineral in Earth's mantle.

However, not much olivine is found on Earth's surface, because it weathers quickly, particularly in the presence of moisture, turning to clay. Because Mars is so dry, these olivine dunes can hang around on the surface for a very long time.