Ants are pretty organised little creatures. Highly social insects, they know how to forage, build complicated nests, steal your pantry snacks, and generally look after the queens and the colony, all by working together.

Leaf-cutter ants turn that cooperation up several notches. Leaf-cutter ant colonies like Acromyrmex echinatior can contain millions of ants, split into four castes that all have different roles to maintain a garden of fungus that the ants eat.

These farming ants might make a top-tier team of gardeners, but that doesn't mean they don't get into the occasional scrap, and living in such large groups usually also means facing an increased risk of pathogens.

For these reasons, a little protection never goes astray, and although scientists aren't entirely sure why, it seems these little guys needed protection enough to evolve their own natural body armour.

A team led by researchers from the University of Wisconsin-Madison analysed this 'whitish granular coating' on A. echinatior and came to the conclusion that the coating is a self-made biomineral body armour - the first known example in the insect world.

"We have been working on these leaf-cutting ants for many years, especially focusing on this fascinating association they have with bacteria that produce antibiotics that help them deal with diseases," senior author and University of Wisconsin-Madison microbiologist Cameron Currie told ScienceAlert.

"It was in our effort to identify what the ant might produce for the bacteria that [first author Li] Hongjie discovered the biomineral crystals on the surface of the ant."

The team peered deep onto the mineral layer that covers the ant's exoskeleton, using electron microscopy, electron backscatter diffraction, and a number of other techniques. They found the coating is made up of a thin layer of rhombohedral magnesium calcite crystals around 3-5 micrometres in size. 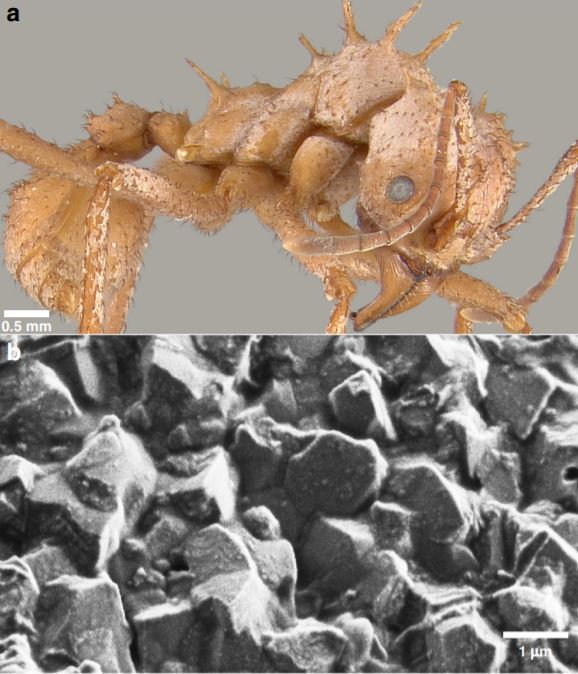 You might be more familiar with biomineral skeletons in crustaceans such as the hard shells of lobsters. However, insects evolved from crustaceans, so it makes sense that some may have retained a similar armour-like trait.

The team also reared the ants to see when this coating occurred, and how it protects them – finding that the coating is not present in baby ants, but develops rapidly as the ants mature, and that this finished coating significantly hardens the exoskeleton.

To confirm this, the researchers put the ants into experimental battles, finding that those with the armour were more protected in battle, and also from pathogens.

"To further test the role of the biomineral as protective armour, we exposed Acromyrmex echinatior major workers with and without biomineral armour to Atta cephalotes soldiers in ant aggression experiments designed to mimic territorial 'ant wars' that are a relatively common occurrence in nature," the team write.

They also discovered that without the armour, the ants were significantly more likely to be infected with an insect attacking fungus called Metarhizium anisopliae.

Although we don't understand how this leaf-cutter ant species evolved this coating, the team thinks that it's probably not the only insect that developed such a protection.

"Given that fungus-growing ants are among the most extensively studied tropical insects," the team writes, "our finding raises the intriguing possibility that high-magnesium calcite biomineralisation may be more widespread in insects than previously suspected, suggesting a promising avenue for future research."

While there might be a number of species of ants that have a similar coating, with more research the 'armour' technology could even make the leap to humans - or at least our stuff.

"We think that there is potential for development of the material as adding strength to a range of products. It is light and thin," Currie told ScienceAlert.

"The field of material science is an exciting area of science."