In its 26 years in space, the Hubble Space Telescope has taken thousands of incredible, awe-inspiring images in the name of science.

Most of us are familiar with the colourful ones, showing distant nebula and strange-shaped galaxies. But one of the most important photos ever captured in astronomy was taken by Hubble back in 1995, and many people don't even give it a second look.

The 1995 Hubble Deep Field isn't particularly colourful or flashy, but as Vox explains in the video above, instead, it's a snapshot of nearly the entire history of the Universe, and the first photo of its kind ever taken.

Yep, aside from a few twinkling stars, with their tell-tale beams coming off them, every single dot that you see in the image below isn't a star, it's an entire galaxy: 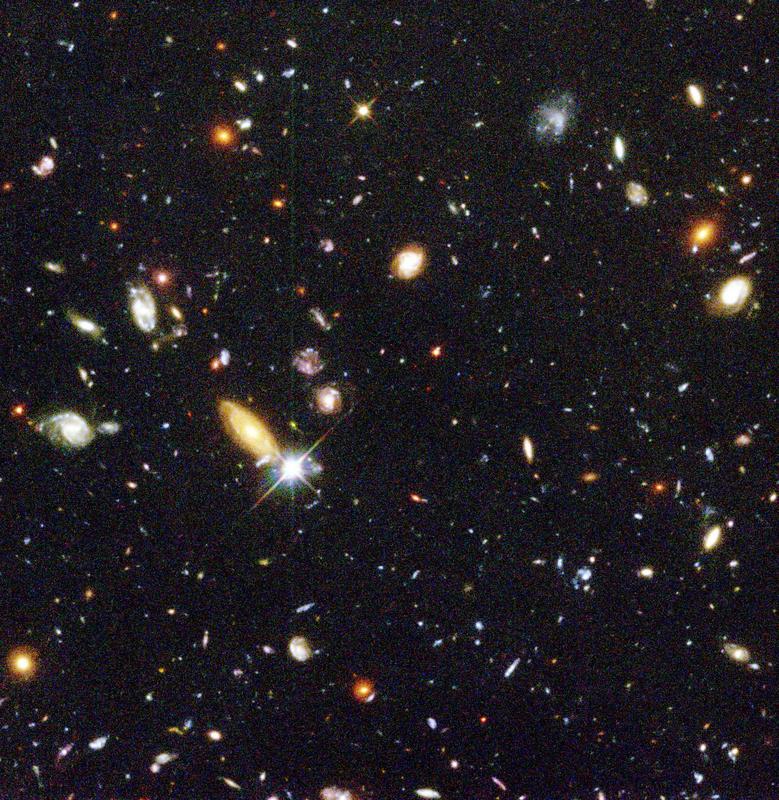 Some of the smaller galaxies in the image are an incredible 12 billion years old - which means light is reaching us in this photo from just a couple of billion years after the Big Bang. We'll let that sink in for a second.

But what's most fascinating about this image is how it came about. Before this, the Hubble space telescope was only really used to investigate specific objects in space - say an unusual star or galaxy.

Instead, astronomer Robert Williams, who was director of Hubble between 1993 and 1998, decided to use the telescope to do something different - look at nothing in particular.

They had no idea what they'd see, but the hope was that by staring into a dark patch of space, wavelengths of light might reach us from further back in the evolution of the Universe than we'd seen before.

It was a huge risk, and at the time, NASA couldn't really afford to be wasting money - mission scientists had recently screwed up by sending Hubble into space with a faulty mirror, which resulted in three years of blurry images. As a result, the US space agency was the laughing stock of the government and media for months.

(The look on the NASA scientists' faces when Hubble's mirror was fixed is worth watching the video for alone, just FYI.)

Ignoring the haters, Williams decided to take his "photo of nothing" anyway, and boy, did it deliver. The Hubble Deep Field was the first photo ever taken so far back into our Universe, and also introduced a whole new technique to astronomy.

Perhaps most importantly, it changed the way scientists share data forever, but we'll let the video above explain that one.

One thing's for sure, we owe a lot to Hubble and the researchers behind these crazy images. We're sure going to miss the space telescope when it eventually retires.