In the space of just five minutes a day – about the time it takes to take 30 deep breaths – a simple breathing exercise can lower blood pressure, boost vascular health, and could sharply reduce your chances of developing serious cardiovascular disease.

It almost sounds like an infomercial (and we didn't even mention the part about how you can do this in the comfort of your own home, on the couch while watching TV).

But this is no gimmick. According to new research, it's the real deal: a highly convenient and easy-to-perform technique that could improve the health of millions of people, especially older adults with high blood pressure and cardiovascular problems.

"We have identified a novel form of therapy that lowers blood pressure without giving people pharmacological compounds and with much higher adherence than aerobic exercise," says integrative physiologist Doug Seals from the University of Colorado Boulder. 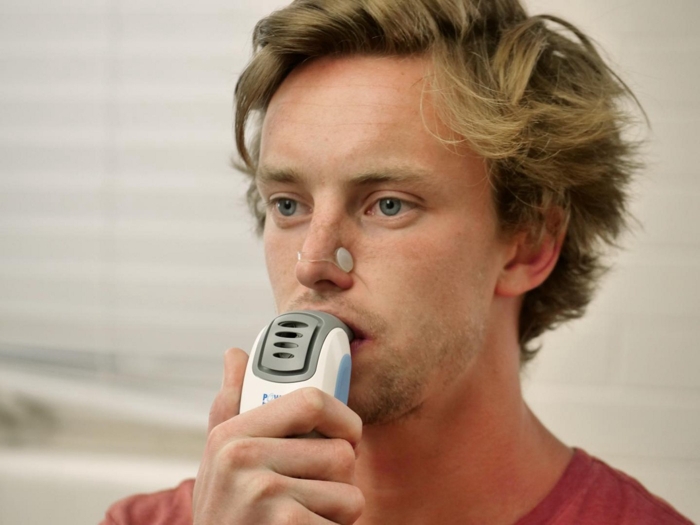 It's called Inspiratory Muscle Strength Training (IMST), a form of physical training specifically designed to exercise the diaphragm and other breathing muscles, using a handheld device that provides resistance when you inhale through it (kind-of like an asthma puffer that works against you).

IMST was first pioneered decades ago as a way to help critically ill respiratory disease patients strengthen their independent breathing functions, using only mild or moderate resistance in the device.

More recently, however, research has shown that the same technique – when paired with high resistance, and in short sessions only lasting five minutes a day – can deliver a range of health benefits, improving sleep in patients with sleep apnea, lowering blood pressure, and reducing stress perception.

To investigate further, a team led by integrative physiologist Daniel Craighead from the University of Colorado Boulder conducted a clinical trial in which 36 healthy adults aged between 50 and 79 trialed IMST for a period of six weeks.

In this cohort, half the group were randomly assigned to do high-resistance IMST, using devices that make it significantly more difficult to inhale through, giving your breathing muscles a higher-intensity workout.

The other half of the group also did IMST for six weeks, but were effectively given a placebo: a sham treatment that used low-resistance versions of the device.

Apart from that key difference, the experiment was the same for both groups: use the device to inhale 30 times a day, in sessions lasting around five minutes, for six days a week, for six weeks.

After six weeks, the treatment group using high-resistance IMST saw significant drops in systolic blood pressure (SBP), greater than or equal to what can result from implementing other healthy lifestyle strategies, including aerobic exercise and some blood pressure-lowering medications.

"This improvement in SBP is clinically meaningful because it is associated with a 30 percent to 40 percent lower risk of death from cardiovascular disease," the researchers explain in their study, noting that the effects lasted for many weeks even after the experiment finished.

"The reduction in casual SBP was largely sustained after six weeks of abstaining from IMST, with about 75 percent of the initial reduction preserved."

In addition, the IMST group also saw significant improvements in vascular endothelial function, suggesting their artery health had improved (although arterial stiffness was unchanged in such a short experiment), while markers of systemic inflammation were lowered.

While the researchers don't fully understand all the mechanisms of how high-resistance IMST delivers these benefits, it's possible that the breathing exercises prompt the cells lining blood vessels to produce more nitric oxide, which helps muscles to relax and improves blood flow.

The team suspects a longer-lasting intervention might lead to even more impressive results, but also acknowledge their study needs to be replicated in a larger experimental setting for us to know more.

While high-resistance IMST can't be recommended widely until results from such larger studies are known, what is certain is that the technique does seem easy to actually commit to: 95 percent of participants in the study completed everything that was required from their 5-minute exercise sessions, and nobody dropped out.

That high level of adherence – afforded by the ease and convenience of doing something for just a few minutes a day – is worth bearing in mind, given adults' level of adherence to doing the generally recommended 30 minutes of physical activity per day is much lower – estimated to be as low as under 5 percent by one study.

"Taking a deep, resisted, breath offers a new and unconventional way to generate the benefits of exercise and physical activity," Mayo Clinic researchers Michael Joyner and Sarah Baker, who were not involved with the study, write in a commentary on the research.

The findings are reported in the Journal of the American Heart Association.