This Alarm Wakes You With Warm Beams of Light, And Lets Your Partner Sleep In

Having the annoying ring of an alarm clock slap you out of your warm, peaceful sleep is a painful truth that nearly the entire world has to live with, over and over again, every single morning of our arduous human existence. But engineers in the US may have just developed a device that could revolutionise the way we wake up using sunrise-like light and focussed sounds... and we're ready to stop them right there and hand over our money.

Rousing people with light is nothing new, Phillips started doing it back in 2006, and other variations on light-based alarm clocks quickly followed. But this new wall-mounted alarm, called Wakē, does something very different - it tracks your body using heat sensors, and then sends targeted beams of warm, white LED light onto your face, to replicate the feeling of a sunrise. Once your body has started to rouse naturally, the alarm then sends a wave of extremely focussed sound at you, allowing you to wake up fully without your partner hearing a thing.

So how does it work? The device was created by mechanical and electrical engineers from Lucera Labs, and uses an infrared sensor to find out exactly where your body is on the bed. All you have to do the night before is tell it which side of the bed you sleep on using the connected smartphone app, and what time you want to wake up. It's then able to focus gradually intensifying light and sound directly at you (and only you) using targeted white LED lights, and parametric speakers. 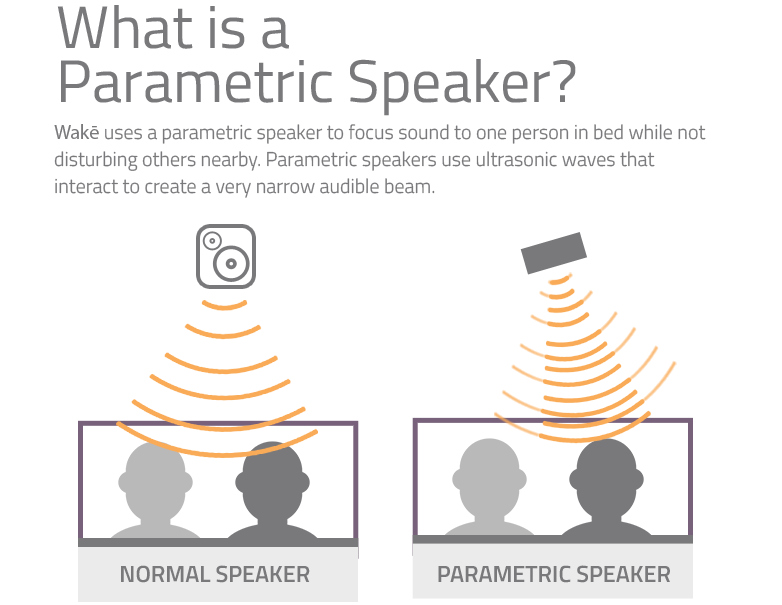 These speakers use interacting ultrasonic waves, which are much shorter than regular sound waves, to create a "laser beam" of sound that's only audible to the ears of someone directly in its path. You can see it in action below around the 2:10 mark:

The infrared sensor is so precise that if you start to wake up, hit snooze and then roll over to spoon your significant other, the Wakē will follow you and 10 minutes later start the wake up process again, targeted right at your new position.

Importantly, the wifi-connected alarm clock doesn't contain cameras or any recording devices that could be hijacked online and used against you, as the creators are very quick to point out. And the device only needs to be charged a few times a year.

You can find out more about the engineering behind the scenes in the video below, which was released as part of the lab's Kickstarter campaign to fund the alarm clock. The first round of prototypes, which are scheduled to be shipped in September this year, are already sold out.

On behalf of all of us who have partners who work late nights (fellow hospitality widows, I'm talking to you) or ridiculously early mornings, I'd like to say a very heartfelt thank you to science. Now shut up and take my money.