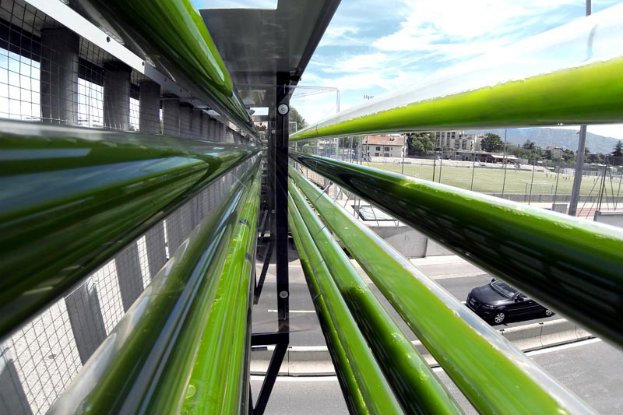 Plant-like microorganisms called algae are pretty interesting little creatures - some species form expansive 'algal blooms' that harm the environment, whereas others can be used to produce biofuel and food sources. Some can even infect humans and mess with their brains.

This diverse organism uses sunlight and carbon dioxide to grow, and produces a large amount of oxygen. A bustling highway might seem like an odd place to try to farm algae, but that is exactly what Dutch and French designers from the international design group, Cloud Collective, have done on a highway overpass in Switzerland.

As part of a recent garden festival in Geneva, the team at Cloud Collective aimed to create an algae garden that uses the highway’s excess of carbon dioxide coupled with sunlight to transform the polluted landscape into a smart space for urban farming. The system itself is quite simple, the algae are cultivated inside tubes, and a series of pumps, filters and solar panels aid the process. Once the algae mature, they can be produced into a number of different products, including biodiesel, nutrients, medication and cosmetics.

“Our site, a viaduct over a small highway, is particularly violent and quite out-of-tune with the idea of the garden as a peaceful natural haven," write the Cloud Collective team at their website. "Instead, we focus on the character of the site and try to prove that even these locations of highways and car dealers – despite their anonymous and generic character – can play an important role in the production of food and biomass."

The team hopes that the design will encourage designers to start thinking outside the box, by using existing infrastructures as agricultural sites. We think that the idea is brilliant, and our highways could certainly use a touch of greenery.

Watch this video to find out more about how the system works: