A new analysis of the ancient Mayan text, the Dresden Codex – the oldest book written in the Americas known to historians – suggests an early Maya scientist may have made a major discovery in astronomy more than a thousand years ago.

According to a new study, astronomical data written in part of the text called the Venus Table weren't just based on numerology as had been thought, but were a pioneering form of scientific record-keeping that had huge significance for Maya society.

"This is the part that I find to be most rewarding, that when we get in here, we're looking at the work of an individual Mayan, and we could call him or her a scientist, an astronomer," says anthropologist Gerardo Aldana from University of California, Santa Barbara. "This person, who's witnessing events at this one city during this very specific period of time, created, through their own creativity, this mathematical innovation."

Aldana's reading of the Venus Table – incorporating epigraphy (the study of hieroglyphics), archaeology, and astronomy – suggests that an ancient mathematical correction in the text pertaining to the movements of Venus can likely be traced to the city of Chich'en Itza during the Terminal Classic period of 800 to 1000 AD. 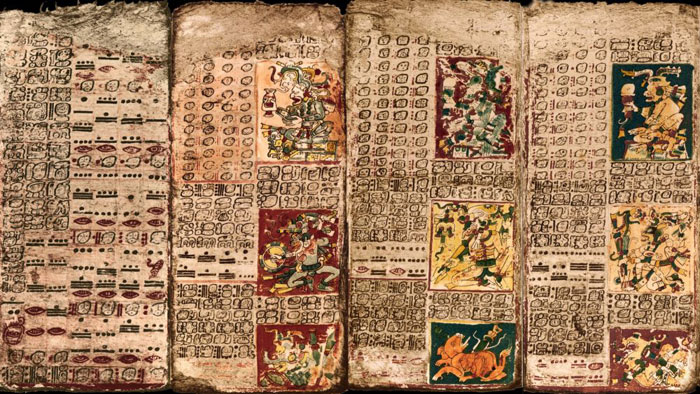 The Preface of the Venus Table of the Dresden Codex, first panel on left, and the first three pages of the Table. Credit: University of California, Santa Barbara

This "mathematical subtlety", which scholars have long known about but considered a numerological oddity, serves as a correction for Venus's irregular cycle, which lasts 583.92 days, just like our own Gregorian calendar incorporates leap years.

"So that means if you do anything on a calendar that's based on days as a basic unit [using Venus but without the correction], there is going to be an error that accrues," explains Aldana.

According to Aldana's analysis of the Venus Table, a key verb in the text – k'al – has a different meaning than what researchers originally interpreted it to be. He says it should be read to mean "enclose", which gives it a new cosmological significance in the text, helping to record a very different scientific message.

"That's what they did. They kept these over a long period of time and then they found patterns within them," he added. "The history of Western astronomy is based entirely on this premise."

To test the hypothesis, Aldana examined another Mayan archaeological site, Copán in Honduras. Records of Venus in this former city-state matched the records in the Venus Table, adding weight to the idea that the observations of the planet's movement were a form of historical, scientific record.

And Aldana thinks it's probable the observations weren't purely kept for astronomical record-keeping, but served as an important foundation for calendar-based activity.

"They're using Venus not just to strictly chart when it was going to appear, but they were using it for their ritual cycles," he says. "They had ritual activities when the whole city would come together and they would do certain events based on the observation of Venus."

If the new interpretation of the Venus Tables is correct, it means this early Mayan record wasn't just a numerological exercise based on mathematic calculations, but a bigger scientific achievement based on a much broader observation – and one for which greater credit is due.

"That's why I'm calling it 'discovering discovery'," says Aldana, "because it's not just their discovery, it's all the blinders that we have, that we've constructed and put in place that prevent us from seeing that this was their own actual scientific discovery made by Mayan people at a Mayan city."

The findings are reported in the Journal of Astronomy in Culture.