If you're not familiar with what goes on inside a woman's body during pregnancy, the above image might not look particularly unusual to you – but it's something the doctors at Angers University Hospital in France had never seen before.

In what is only the 26th documented episode of this extremely unusual pregnancy complication, a woman had developed a tear in the wall of her uterus, through which her baby's legs and a large amount of protective amniotic fluid escaped.

The case began when a 33-year-old woman went to hospital for what was supposed to be a regular, scheduled ultrasound during the 22nd week of her pregnancy.

At the time, she had detected no unusual symptoms, and presumably thought the check-up would be simply routine.

But when doctors examined her, they found a large herniation of the amniotic sac – the protective membranes that envelop the foetus during gestation.

In this case, the ultrasound showed that the sac had slipped through a rupture in the left wall of her uterus.

Additional scans via magnetic resonance imaging (MRI) showed that the tear in the uterine wall extended for 2.5 centimetres (1 inch), indicated by the arrows in the image below: 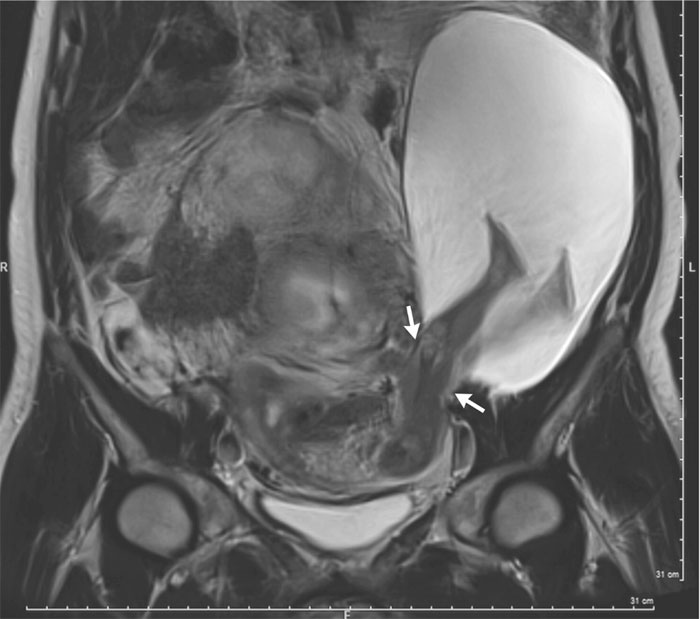 Obstetrician and gynaecologist Pierre-Emmanuel Bouet told Sara G. Miller at Live Science that this "extremely rare" condition was something the medical staff at the hospital had never encountered.

The doctors advised the patient that the herniated sac could lead to potentially dangerous complications as the pregnancy developed – including a complete uterine rupture, or the possibility of pre-term birth.

But the woman and her partner decided to proceed with the pregnancy as well as they could, and monitor the situation closely.

According to Bouet, the most likely cause for the rupture was the woman's earlier history with caesarean sections (C-sections). This pregnancy was the patient's sixth, with her five previous children all being delivered by C-section.

While the tissue where these C-section incisions were made had healed over and strengthened, areas around the uterus incisions had become weakened, leading to the rupture.

According to doctor Yvonne Bohn from Providence Saint John's Health Centre in Santa Monica, repeated C-sections are known to carry risks, but they don't usually present like this.

"It is extremely rare. Usually the risk of rupture [occurs] during labour, but in this case the uterine wall was very weak from prior C-sections," she told Melissa Willets at Parents.

"The risk of uterine rupture increases exponentially with each C-section," Bohn added, explaining that the situation can become an issue after three or four C-sections.

Fortunately in this case, the issue didn't result in the loss of the baby.

Two months after the MRI, with the pregnancy now in its 30th week, another ultrasound showed that the tear had doubled in length to 5 centimetres (2 inches).

As a result, more of the amniotic sac had slipped through the gap, along with more of the foetus's body – with the abdomen now popping through too.

A decision was made to attempt an early C-section, and at 30 weeks, a healthy baby boy weighing 1.385 kilograms (3 lbs.) was delivered.

After the birth, the woman's uterine wall and herniated amniotic sac were treated, and the patient was discharged after only five days in hospital.

Six months later, both the mother and her baby were healthy and doing well, so despite the potentially dangerous situation, it all worked out okay.

And now that the doctors have written up the circumstances of this unusual case, hopefully it'll help other medical staff to be more aware of this rare condition in the future.

The findings are published in The New England Journal of Medicine.