The old well doesn't look like much - a wooden crate-like object, dilapidated, crumbling a little. But according to new research, it's really special. A tree-ring dating technique has revealed that the oak wood used to make it was cut around 7,275 years ago.

This makes it the oldest known wooden structure in the world that's been confirmed using this method, scientists say.

"According to our findings, based particularly on dendrochronological data, we can say that the tree trunks for the wood used were felled in the years 5255 and 5256 BCE," explained archaeologist Jaroslav Peška of the Archaeological Centre Olomouc in the Czech Republic in a press statement last year.

"The rings on the trunks enable us to give a precise estimate, give [or] take one year, as to when the trees were felled."

The well was unearthed and discovered near the town of Ostrov in 2018 during construction on the D35 motorway in the Czech Republic. Ceramic fragments found inside the well dated the site to the early Neolithic, but no evidence of any settlement structures were found nearby, suggesting the well serviced several settlements at a bit of a distance away.

It was filled with dirt, so an archaeological team carefully excavated and extracted it. It consisted of four oak poles, one at each corner, with flat planks between them. The well was roughly square, measuring 80 by 80 centimetres (2.62 feet). It stood 140 centimetres tall (4.6 feet), with a shaft that extended below ground level and into the groundwater.

Even in waterlogged conditions, the state of preservation of the wood was exceptional, showing marks from the polished stone tools used to shape each piece. 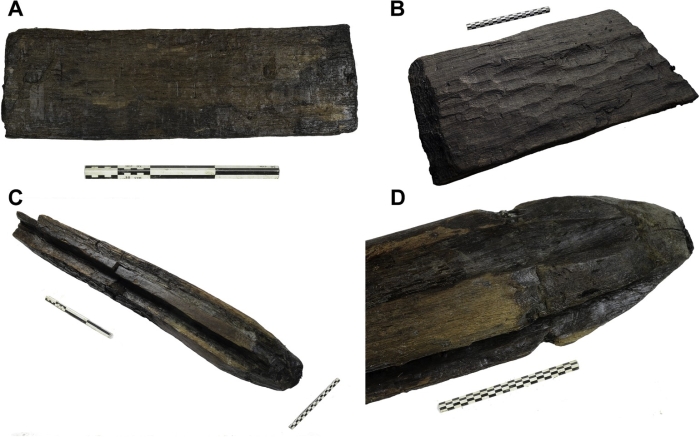 "The construction of this well is unique," Peška said.

"It bears marks of construction techniques used in the Bronze and Iron ages and even the Roman Age. We had no idea that the first farmers, who only had tools made of stone, bones, horns, or wood, were able to process the surface of felled trunks with such precision."

And that amazing state of preservation also allowed for dendrochronological (based on tree rings) and radiocarbon dating, based on radioactive isotopes of carbon.

According to these techniques, the trees that supplied wood to the flat planks on the sides of the well were felled around 7,275 years ago. That's probably when the well was constructed. But two of the poles told a different story.

Both were felled earlier - one around 7,278 or 7,279 years ago; and the other around nine years before that. This, the researchers concluded, meant that the two posts must have been used previously, and repurposed into posts for the well.

One of the side planks also had a different age. It was quite a bit younger, felled between 7,261 and 7,244 years ago. This is likely because of a repair to the well at some point.

It is important to note that the well has not been definitively confirmed as the oldest wooden structure still in existence. There are over 40 such wells known in Europe dating to a similar time period. Some are even thought to be earlier - one at Sajószentpéter in Hungary, suspected to be from between 5400 and 5200 BCE; and one from Tiszakürt, also in Hungary, is thought to be from between 5600 and 5400 BCE.

According to the team, however, these have not been dated using dendrochronology, and therefore the results are less reliable.

Whichever well wears the hat, however, the workmanship remains remarkable.

"The available technology, i.e., tools made of stone, bones, horn or wood, was sufficient for sophisticated carpentry," the researchers wrote in their paper.

"Comparing the structure of the Ostrov well with examples of carpentry from later periods raises nothing less than admiration for the perfectly precise work."

The research has been published in the Journal of Archaeological Science.