The Arctic is melting at unprecedented rates: Greenland's ice is disappearing six times faster than it was four decades ago. In August, the ice sheet lost 60 billion tons in just five days of summer thaw.

Over the last four decades, we've lost 75 percent of the volume of Arctic ice. The current extent of the sea ice is the second-lowest it's been since scientists started keeping track in 1979.

In addition to raising sea levels, this melting significantly contributes to climate change because Arctic ice reflects sunlight into space (in part because sea ice is bright and white). So less ice means less heat leaving the planet, which in turn leads more ice to melt. It's a vicious cycle.

A nonprofit called Ice911 offers a potential solution to this ominous feedback loop: The group has proposed blanketing key parts of the Arctic in millions of hollow, glass microspheres to form a protective layer that reflects sunlight and insulates melting ice.

"We're an awfully creative species, and we need to slow the climate-change clock," Leslie Field, the founder of Ice911, told Business Insider. 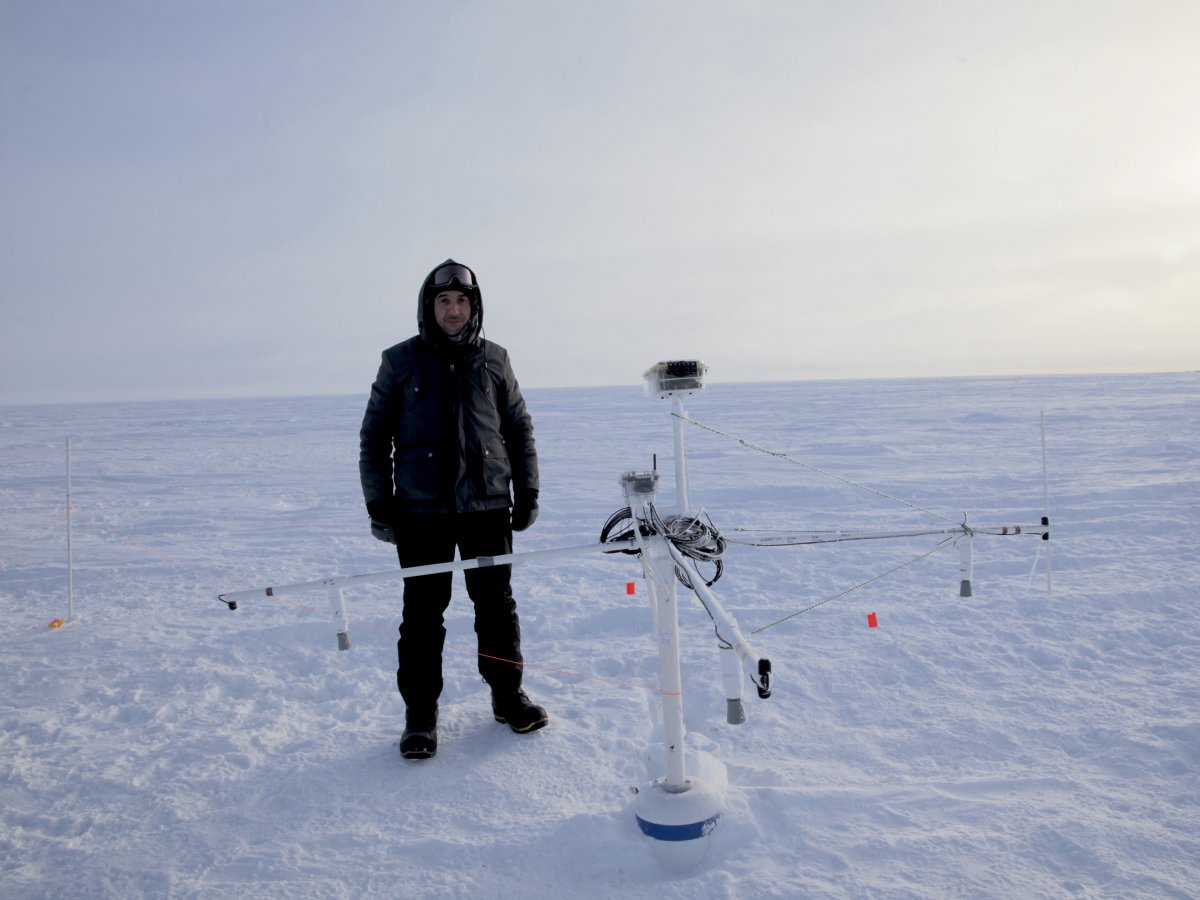 Ice911 volunteer, Vangelis Christoduoluo, stands next to a remote monitor that collects data on the beads' effectiveness. (Susan Kramer/Ice 911)

The tiny spheres Ice911 has developed look more like grains of sand than beads. They're manufactured from silica, a compound made of silicon and oxygen, because the material is abundant in the natural world and harmless to humans and animals.

Field described the microspheres as "small, fine, white beach sand" that floats. In a sense, the material is a lot like snow.

The reflective beads stick to ice and water on contact, and their chemical composition ensures they don't attract oil-based pollutants. Simulations done by Ice911 suggest that using the technology to restore ice reflectivity could help lower temperatures by 1.5 degrees Celsius over a large part of the northern Arctic.

But so far, the technology is still in the field-test phase. Field said Ice911 started with "a very small experiment in buckets" on the deck of her own home, then conducted small tests at a lake in the Sierra Nevada mountains and a pond in Minnesota.

In the last two years, Field and her colleagues have brought the microspheres to the Arctic, where they spread the material over a frozen lake near Utqiaġvik (Barrow), Alaska. The results, some of which were reported in a May 2018 study, suggest the silica beads did indeed increase ice reflectivity and thickness.

Field doesn't want to blanket all 1.6 million square miles of Arctic sea ice with the beads, though. Instead, her team is using climate models to pinpoint strategic parts of the Arctic where the microspheres could have maximum impact.

One of these areas, she said, is the Fram Strait between Greenland and Svalbard – a hotspot of melting. That region is warming nearly four times faster than the global average.

"This is where ice floes come to die, and the cemetery is filling faster each year," climate physicist Till Wagner told The Guardian earlier this year.

Field thinks that in three years, Ice911's technology could be deployed to curb this floe demise. But she estimates it would cost about US$5 billion to scatter the microspheres on a meaningful scale.

"When you look at that cost, it's big," she said. "But the cost of doing nothing is far greater."

For now, she said, Ice911 still needs to conduct more tests and get proper permissions from governments and environmental groups before considering any large-scale deployment. 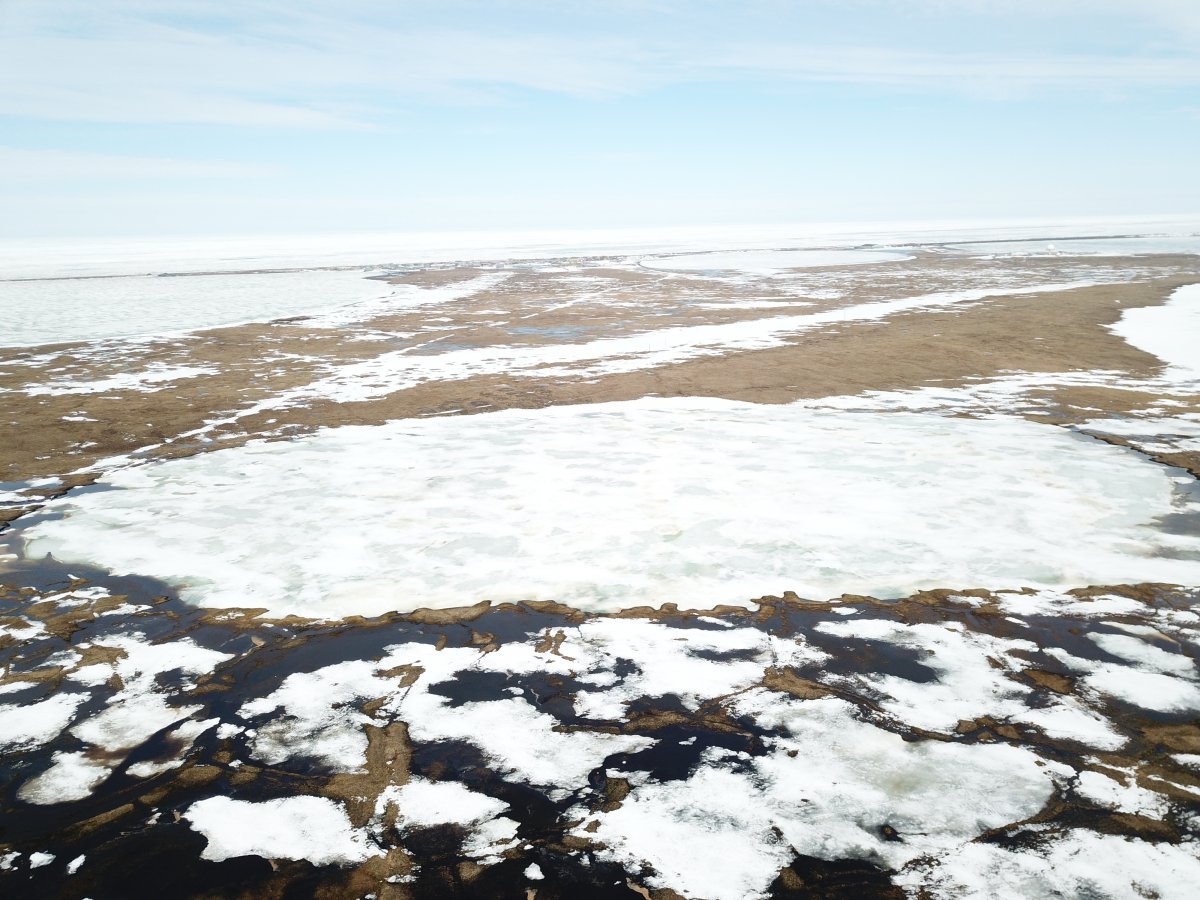 Ice911's beads are tested in a small area in Alaska. (Courtesy of Susan Kramer/Ice 911)

Every September, Arctic sea ice hits its minimum extent. Since the 1980s, that minimum has decreased by about 13 percent per decade, and the decline is accelerating, as the NASA animation below shows.

According to NASA data, this year has tied 2007 for the second-lowest sea ice extent on record. The worst year was 2012, when the ice shrank to under 1 million square miles (2.6 million square kilometers).

Researchers at the European Space Agency have warned that the current rate of carbon emissions means we could see an ice-free Arctic in just decades.

That's the ice that Ice911 wants to save.

Field says her invention is a climate solution, not geoengineering

Field, who has 55 patents, said she first pinpointed ice reflectivity as the climate "lever" she wanted to pull in 2006, after watching Al Gore's documentary An Inconvenient Truth. The film explains that the loss of reflectivity in the Arctic had contributed to one-fifth of global temperature rise.

Since that documentary came out, researchers' warnings about the consequences of climate change have gotten much more dire. That has led some scientists and politicians, like Democratic presidential candidate Andrew Yang, to consider geoengineering technologies that could essentially hack our climate.

Geoengineering strategies range from developing facilities that suck carbon dioxide out of the air on the safer end of the spectrum, to deliberately injecting reflective chemicals into the atmosphere to send more sunlight back into space on the more extreme side.

Field and her team referred to Ice911's technology as "localised, reversible geoengineering" in their 2018 paper, but she emphasised that the beads are "different than what has come to be known as geoengineering primarily."

Instead, she said, Ice911's microspheres are "working to rebuild something that was, until recently, already there, not taking the climate on a new path." Plus, given that the beads are made of material that's "darn close to ubiquitous in the environment," Field added, she sees "a defensible distinction" between her organisation's approach and efforts to, say, inject chemicals into the atmosphere.

A 2018 article in Nature noted that geoengineering Arctic and Antarctic glaciers could buy us crucial time to address climate change. But Field was quick to note that Ice911's work should not be seen as a sufficient solution on its own.

"I don't want this to be an excuse for coal mines, I don't want people to say, 'We don't have to change a thing because the engineers will fix it,'" she said.

But given that polar melting is on track to raise seas 3 feet (90 centimetres) by 2100 and threatens to displace hundreds of millions of people, Field added, the need for Ice911's technology is now "urgent and demonstrable".