This Insane Bamboo Treehouse Doesn't Use Any Nails or Screws

To build a treehouse, you normally need nails or screws, a hammer, and planks of wood.

But Penda, a Beijing-based architecture firm, has designed a treehouse that doesn't use any of those things. It would only require rope and rods of bamboo.

The design concept recently won second place in the architecture design category at the 2016 A'Design Awards.

Penda hasn't built the treehouse yet, but it prototyped a small model of the modular bamboo system in 2015. The team calls the design 'Rising Canes', since layers of bamboo would stack on top of each other to form the treehouse.

The team hopes to build a larger model outside Beijing by 2023 - one where about 20,000 people could live.

The treehouse would use recycled, local bamboo and have little environmental impact on the site, the team writes on Behance.

Penda connects the bamboo rods with ropes - rather than nails - to form the joints. Eight rods make up what the team calls a "knot," a series of which would be used to create walls of interlaced bamboo.

The floors would be made of side-by-side rods. It's a modular system, meaning new layers could be built off-site, then delivered and added to the existing structure.

As more layers of bamboo are added, a treehouse would form that could function like an apartment complex.

The treehouse would feature small residences for families. Each story would be about 13 feet high.

Local plants would also grow on the structure.

As opposed to most buildings, the treehouse's design allows plants to grow naturally on it. For every culm of bamboo taken for construction, the team would plant two more, creating a lush bamboo forest surrounding the building. 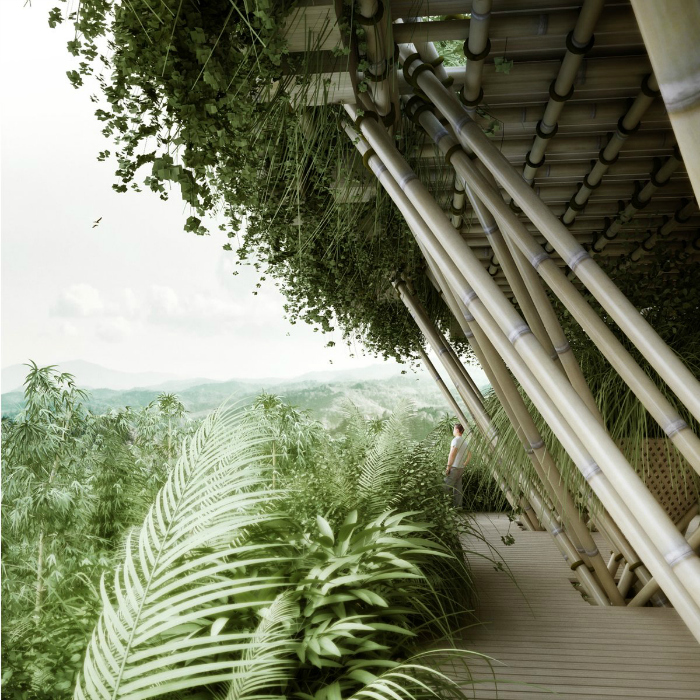 "This feeling of leaving city life behind and getting connected to nature was the driving force," behind the design, the team says.

About 20 families would be able to live in the first completed building, which Penda hopes to construct in the next few years. By 2023, the team imagines expanding the structure to a sprawling, 250-acre complex.

As more layers of bamboo walls and floors are added, the structure would grow from a treehouse into a tree-city.

To learn more about Rising Canes, check out Penda's video below.