This Is a 'Cross Sea'. You Do Not Want to Get Caught in One

They say you should never turn your back on the ocean, but what if the waves are coming from all sides? This is what happens when an unlucky swimmer or boater gets caught between two opposing swells, known as a cross sea.

This rare pattern of square waves is a beautiful sight to behold, but the natural phenomenon, which can appear and reappear within minutes, is also extremely dangerous.

More common in shallow waters, cross seas can often be seen off the western point of France's Isle of Rhé, for example, or on the beaches of Tel Aviv, though they can arise in many coastal regions around the world. 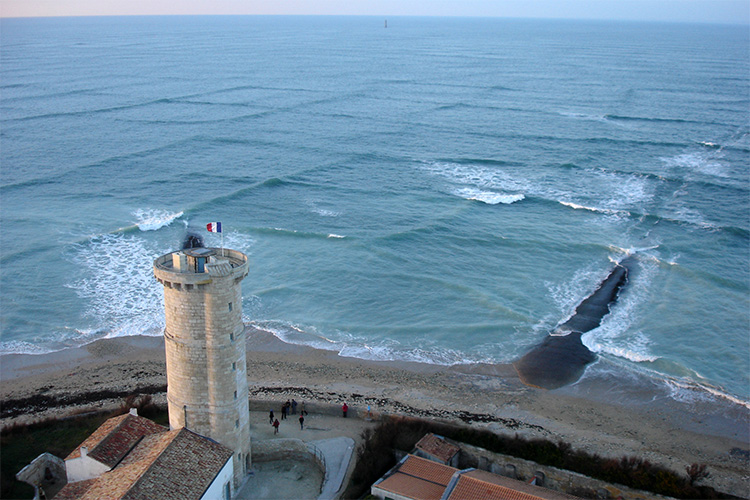 Caused by two wave patterns travelling at "oblique angles", their chessboard-like pattern usually occurs when two swells coexist, or when the wind pushes waves in one direction and a swell pushes them in another.

Physicists and mathematicians consider it an example of the Kadomtsev–Petviashvili equation, which is a partial differential equation that describes nonlinear wave motion and is often used to explain interacting weather systems.

(Liron Barakiva)Boaters and swimmers, on the other hand, simply think of it as a hazard. Usually associated with strong and powerful rip tides, these cross seas can put humans in quite the pickle, as is exemplified in the terrifying image below.

The powerful ocean currents that generate these unpredictable and unusually tall waves (up to nearly three metres high in some cases and referred to as 'white walls'), are capable of tipping over large boats and are suspects in many historical shipwrecks.

As such, life-savers warn that if you see them, you should under no circumstances enter the water. And if, by some chance, they suddenly appear around you, then the idea is to get to shore as quickly as possible.

When the ocean goes rogue, it doesn't mess around. Neither should you.