Sorry Guys, This Is The Age You Start Losing Your Friends

Scientists say they've pinpointed the time in our lives when we start losing friends, rather than making new ones, by looking at the phone data of some 3.2 million Europeans. Anonymised calls from the customers of a European mobile network were analysed to check people's calling habits, and it looks like 25 is the watershed age for making new relationships.

That's the point at which both men and women call the highest number of different people regularly. While this isn't a precise measurement of friendships, it does suggest that this is the stage in life when our social circles are at their largest, say researchers from the Aalto University School of Science in Finland and the University of Oxford in the UK.

From then on, we start losing contact with people, as new focuses – such as children and careers – start to put pressure on our time. We begin dropping friends for the rest of our lives, although there is a small plateau at the age of 45 to 55 years old.

Interestingly, at younger ages, men have more friends than women, but from the age of 39 upwards, that trend is reversed. At this point, both genders are only calling around 12 to 15 people each.

We can keep in touch in other ways than phone calls, of course, but this particular year's worth of data was collected in 2007 – that's the same year the first iPhone was launched, so mobile messaging and social media apps wouldn't have played as big a role as they do today. 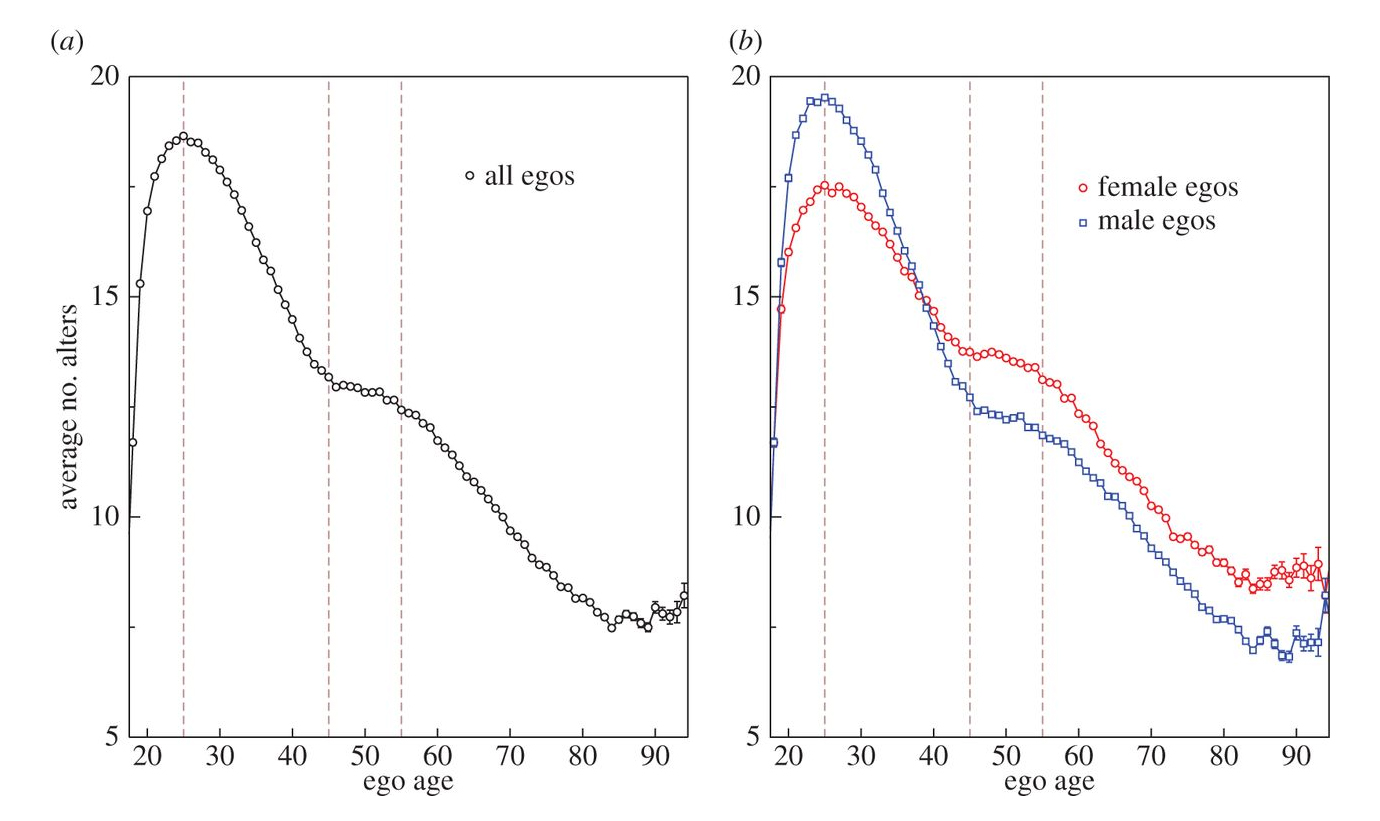 "The difference between the sexes seems to be primarily owing to the more frequent interactions by the females with their adult children and the children's spouses," the researchers write in their study. The researchers suggest that it's possible that women may interact with their own close family members and in-laws more than men do, for the purposes of things like keeping other family members updated on children's activities.

The research serves as a reminder that all the modern tech we use to keep in touch with our friends and family has another, less obvious purpose: it's giving researchers a vast treasure trove of data to study, revealing fresh insights into how we build communities, maintain relationships, and choose who we spend our time with.

The study also backed up previous research suggesting that women have a smaller, closer group of same-sex friends than men do. In other words, females tend to have a close-knit pack of girlfriends, whereas males have a bigger, looser gang of guys to hang out with.

Earlier this month, we saw another study looking at millions of phone records collected in Europe, but in that case, the analysis was concerned with how many close friends we can ultimately keep: the answer turns out to be just five, so choose wisely!

While the research is restricted to data collected from Europeans and wouldn't necessarily reflect other people's social habits, the researchers behind the study say they would expect similar patterns to be present in different societies, even if there wasn't the same level of mobile phone use.

"People will exploit whatever means of communication [are] available in order to achieve their particular social goals," they write. "Thus, we expect the broad principles revealed in this study to apply more or less universally in all cultures. The differences between cultures will probably lie in the timing of peaks and transitions, rather than in the overall patterns themselves."

The findings are reported in the Royal Society Open Science.